Rebuilding a family heirloom from the ground up

Those who call the prairies flat haven’t spent much time near Lethbridge. The hills surrounding this southern Alberta city are plentiful, and they’re steep. If you’re a motorcyclist, some of those inclines present a unique challenge: getting to the top, starting from the bottom. It takes a certain amount of skill and a well-prepared machine to make the crest. Arthur and Brian Pierson, father  and son, had successfully figured out how to tackle these hills. In fact, throughout the 1970s, Brian was a champion hill climber and motocrosser, taking home hundreds of trophies.

Riding skills aside, another reason Brian was so competitive was thanks to his choice of machinery – every bike he rode was a Kawasaki. That’s because, in 1969, Arthur (probably better known by his nickname, Smokey) opened Lethbridge Kawasaki in an old Husky gas station on the north side of town.

“My grandfather worked in the Lethbridge coal mines, and was a motorcycle enthusiast,” grandson Aaron Pierson explains. “He rode an old Harley-Davidson, but in the late 1960s, he got out of the mines and bought the service station to do his own thing. He took on Kawasaki because there was already a Honda shop and a Yamaha dealer in Lethbridge.” 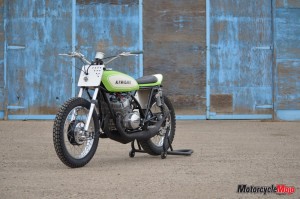 Aaron’s dad, Brian, was a bit of a hooligan in his younger days, riding on the street and occasionally getting into a bit of trouble. But he was a force to be reckoned with in dirt-related competition – as was the entire Pierson family, with all members getting involved in hill climbs, dirt track, hare scrambles and motocross events.

Much of that competitive spirit spilled over as the Pierson family helped others prepare machines for racing. One of those bikes was a 1975 Kawasaki S1C two-stroke 250 cc triple-cylinder hill climber set up for racer Darren Toth.

“It probably started life as a street bike, ridden for a season and then traded back in,” Aaron says. “My grandfather and father would have then built it up as a hill climber. To climb a hill, you have to ride wide open from start to finish, and I think this S1C would bog down at the start. There’s not much bottom end, but plenty of mid-range and top end.”

After a season or two, in 1977 or ’78, the S1C was taken apart and the pieces scattered. The engine, however, was stashed away in a storage trailer behind Lethbridge Kawasaki, all but forgotten until 1996, when a 14-year-old Aaron found it.
“I was digging through that trailer when I came across the S1C engine,” Aaron says. “I grabbed it and stuck it away.” 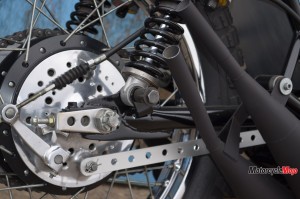 Aaron hauled the triple-cylinder engine around with him over the years until 2008. That’s when he decided it was time to build a machine around the engine and envisioned putting together a supermotard-style street bike. Having grown up working at Lethbridge Kawasaki, Aaron is a self-taught mechanic with some serious wrenching skills. However, his family had to sell the dealership when Brian was diagnosed in 1998 with ALS, finally handing over ownership in 2000. Aaron was too young to take over the reins, and he moved on to work at other local motorcycle shops before getting a job with Pratt and Whitney dyno-testing aircraft engines.

“That spelled the end of the family shop,” Aaron says. “My father was a passionate motorcycle enthusiast, and loved to ride and race. When you get the owner of the shop out and racing, it’s easy to sell product, and for 30 years around here it was just green bikes everywhere.”

Planning on getting another old Kawasaki back on the street, Aaron began his build buying a frame, forks and wheels from a friend’s dad. The chassis was a 1975 S1 roller, with an active VIN – and that would make the registration process a little easier. Aaron’s engine is correct for the frame, but the pair are obviously not a factory match.

Keeping the build in the family, Aaron found a Yamaha TY250 trials seat and tail section hanging in his father-in-law’s barn. There, he also found a set of Carlisle flat-track tires. With the trials seat on the frame, he decided to abandon the supermotard theme, favouring instead a street-tracker style.

Giving the Kawasaki the correct stance, Aaron cut one inch from the springs in the stock forks to lower the front end. A set of solid aluminum handlebars was found in a pile of his spare parts, while a stock Kawasaki speedometer was taken out of its housing and a bracket made to bolt it to the handlebar mounts – it looks like a tachometer up there.

Out back, a set of Marzocchi shocks from a Hercules GS250 was bolted into the rear sub-frame and to the stock Kawasaki swingarm. The Kawasaki wheels were pulled completely apart so Aaron could hand-polish the spokes. Everything was cleaned up, new bearings pressed into place, and the wheels and rims laced and trued with a Carlisle mounted to the rear and a new Duro to the front. To match the drilled oil pump cover on the engine, both front and rear hubs and brake plates were treated to a series of speed holes.

He got the Kawasaki up and running with a bank of carburetors from a 400 triple and a stock S1 gas tank, headlight and exhaust pipes, and spray-painted the entire bike black. Aaron rode it this way for a few years before deciding to take it completely apart to take it to the next stage.

In an attempt to increase lower-end grunt, Aaron installed one size over piston rings filed to fit with the correct gaps and skimmed the heads 0.02-inch. A new custom exhaust was pieced together using mild steel pipe and cones sourced from an online supplier, TIG-welded together to create a set that tucks closely into the bike. To build these pipes, Aaron bought himself a TIG welder and learned how to run a bead – each header and muffler from port to tip contains 17 individual pieces. To fit the pipes, the centre stand tabs were cut off the frame and ground smooth.

Aaron opted to paint his S1C lime green and in a paint scheme that’s a tribute to the 1970 Kawasaki Centurion, a 100 cc rotary-valve two-stroke motocross bike. While he is an accomplished painter and is equipped with all of the correct spray gear, he chose to use rattle cans from Sherwin-Williams to finish the Kawasaki. Aaron repeated the process with the frame; it was cleaned and properly prepared before being shot with multiple coats of gloss black from Dupli-Color.

The stock headlight was replaced when Aaron cut, drilled and mounted a white ATV number plate, tucking a halogen lamp into the lower right corner and routing the control cables through a neatly placed slot. The taillight, tucked up under the tail section, is a strip of LEDs from Acerbis. Slightly rear set foot pegs were salvaged from a Husqvarna WR250. There is no oil tank for two-stroke lube, as Aaron simply runs pre-mix in the gas tank.
Aaron has given this engine that both his late grandfather and late father had worked on new purpose, and he regularly rides the Kawasaki on the streets of Lethbridge. But dirt isn’t beyond its capabilities.

Though no stranger to dirt and racing himself (he’s started competing again this season, after his last race in 2009), Aaron hasn’t run the Kawasaki up any steep Lethbridge hills. He has, however, put the S1C on the flat track at Dinosaur Downs Speedway, near Drumheller, Alberta.

“I could pull the holeshot, but the bike wasn’t really happy getting sideways,” Aaron says. “I had to road-race it around the corners – but this is all just for fun.”