Triumph hits another home run with this stripped-down classic

The bobber phenomenon has been around since the end of the Second World War, when American servicemen returned home only to find there weren’t any new motorcycles to be had because production had been relegated to the war effort. Not content with simply returning to a civilian lifestyle after spending time at war, these soldiers craved excitement, and motorcycles were one way to acquire that exhilaration.

But what’s an adrenaline junkie to do? American motorcycles of the day were slow and heavy. Since performance parts weren’t available, the only way to find the thrill of speed was to modify their bikes by stripping them of unnecessary parts, making them lighter, and thereby faster. British-manufactured bikes at the time were no strangers to the bobber phenomenon. They had smaller engines, but were much lighter and more agile than their American Harley and Indian counterparts, making the British bikes an ideal platform to create a lightweight hot rod. 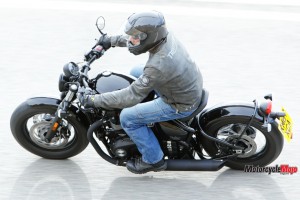 Styles come and go, but much like blue jeans, the minimalistic bobber has never disappeared from the custom scene, being a de facto go-to for its attitude and unique style. In late 2016, Triumph cashed in on the hot rod genre by introducing the 2017 Bonneville Bobber, and the all-out demand for the model has cemented it as the fastest-selling Triumph in the company’s 115-year history.

This year, the company has released its second Bonneville Bobber in its Modern Classics lineup. At first glance, the Bobber Black might look the same as a fully blacked-out standard Bobber, but there are some significant changes to the Black model.

The Bobber Black carries a fat 16-inch front tire on the working end of a 47 mm Showa front fork, as compared to the skinny 19-inch rubber and 41 mm KYB fork on the regular Bobber, giving the former a more muscular-looking front end. The front brakes are substantially beefier with a pair of high-spec Brembo calipers squeezing twin discs, and also up front is a full LED headlight with a distinct daytime running light signature so everyone knows you’re on a Triumph. 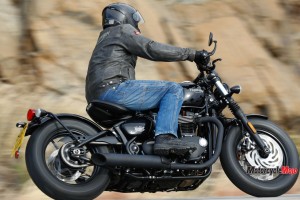 There’s no question that appearance-wise, the Bobber line is minimalistic through and through, but there’s more under the hood, once you take a closer look. Like the regular Bobber, the Black comes standard with two ride modes – Rain and Road – ABS, switchable traction control and a torque-assist clutch. All of the bike’s front-end components make for a considerable upgrade, and possibly the most unexpected item to be included on the Bobber Black is the single-button cruise control, which is the most discreet and easiest cruise control I have ever used – push to turn it on, push the button again to set the speed and push it again to cancel. So easy.

During this press launch, we were to take the Ronda Road from the southern Spanish city of Marbella north to the town of Ronda on one of the best motorcycling roads in the world, I was told. Our ride was postponed a few times in the morning as we waited for the rain to pass. It was also quite cold in the mountainous region we’d be riding through, and cold and rain on twisty mountain roads don’t mix well. As predicted, the rain stopped, and as we began our ride, we could see pockets of blue sky in the direction we were travelling, but the cold persisted, made evident by snow on the side of the road at one point and a tractor that was flinging salt behind it onto the road at chest height – pass with caution. 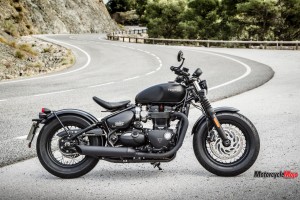 My first impression of the bike when I threw a leg over it was it’s small stature, mainly because of the lack of extraneous parts. The bike is basically wheels and an engine, just like a bobber should be. To really put the size in perspective, it looks small when a rider is seated on it or even standing beside it, even though it actually has a 64 mm longer wheelbase than its Bonneville T120 sibling.

The cantilevered solo seat pan and well-padded seat is comfortable, and the mid-mount foot pegs and slight reach to the bars puts the rider in a neutral position with a straight lower back. Because of the bike’s diminutive size, it could initially be construed as a little cramped for taller riders, but the Bobber has a unique seat assembly that allows it to be easily adjusted up and forward for a more aggressive riding position or to be closer to the handlebar, or slid back for a lower cruiser-like stance, and therefore is able to accommodate a wide range of riders.
Complementing this variable seating position is an adjustable speedo assembly that lets riders aim the speedo gauge to their liking or to minimize sun glare on the speedo face. The minimalist gauge features an analogue speedo with a multi-function display that includes all the regular info you’d expect, like an odometer, trip meters and tach, but also includes fuel level and range till empty, gear position, fuel economy, traction-control settings and a host of other important info, all accessed by a button on the left switchgear to scroll through the various fields.

Riders will appreciate the Bobber Black’s added braking power up front, as an easy two-finger pull on the adjustable brake lever activates a pair of two-piston Brembo calipers squeezing 310 mm discs. All that front stopping power gets directed to the ground via that wire-spoked 16-inch wheel and an Avon Cobra tire. The rear wheel also wears an Avon Cobra, with both tires being designed specifically for the Bobber.

The frigid temperatures in the mountains meant extra care needed to be taken due to a lack of traction from mating cold rubber to even colder pavement. What minimal traction that was available is a testament to the Avon Cobras. The pace was rather aggressive, and the bike handled beautifully on a road with rarely a straight section, and while the bike’s foot pegs touched down fairly easily, I didn’t feel the tires skip out at all.

Our bikes were completely stock, with the exception of optional heated grips. Controlled by a discreet button on the left grip, they provided a high and low setting, and I very much appreciated the warmth during this ride. They warmed up quickly, and because they are a factory option, the heat setting appears on the speedo’s LCD screen.

Jewel of an Engine

While the bike is fun to ride and the higher-spec front-end components position the bike on the upper end of the scale, if you’re considering ownership, the real jewel of the Bobber is the 1,200 cc parallel-twin, high-torque engine that’s tuned to produce a few more ponies and a bit more torque than its Bonneville T120 brethren. Acceleration of this liquid-cooled powerplant is as fluid as the shifting is in its six-speed gearbox. The torque-assist clutch is smooth and easy to pull. Initially, the friction point of the clutch on my demo was too far from the hand grip for my liking, but adjusting the dial on the lever brought the contact point to a much more comfortable and predictable position.

Because of the road temperature and lack of traction, most of my riding was in Rain mode in order to accelerate reasonably safely out of the corners, and I was pleasantly surprised at the speed and smoothness with which the engine propelled me from corner to corner. Switching to Road mode just made it all that much more fun, albeit being more aware of what the rear contact patch was doing.

The sound of the exhaust and the intake howl are very pleasant as you build rpm, and I only felt a very slight buzz in the handlebar and the seat midway through the rpm range – it was barely perceivable and not annoying in the least. The bar-end mirrors stayed smooth enough to always give a clear view behind.
For the most part, the road surface was smooth and free of potholes, and with only 90 mm of travel in the front and 77 mm of movement provided from the under-seat KYB monoshock in the rear, the ride was compliant and comfortable. I have no complaints about the ride that I experienced. I can’t comment on how the suspension would fare on many of our rougher Canadian roads, however, and feel this would be the real test of the suspension.

In the custom world, no two bobbers are alike, and the same could be said for the Triumph Bobber Black once you get a hold of the accessories catalogue. There are more than 120 custom pieces you can choose from to make your bike your own individual creation. Or you can start with the “Old School” inspiration kit as a base and go from there.

There’s a reason that the Triumph Bobber turned out to be the company’s fastest-selling bike in its history and won so many accolades after its release last year. The Bobber Black, available in gloss or matte, steps it up a notch, and I expect you’ll be seeing plenty of these on the road in 2018.