A riding challenge that promotes camaraderie and team spirit, and a chance to compete on the world stage

So you think you can ride an adventure bike in an extreme scenario that it was designed for? There’s a world-class BMW competition called the GS Challenge that’s designed for the regular rider, but it proves that experienced riding and problem-solving do win at the end of the day. It’s open to all riders, providing you don’t hold, or have ever held, a professional race licence in any discipline. In other words, it truly is a grass-roots adventure-bike competition at its finest. 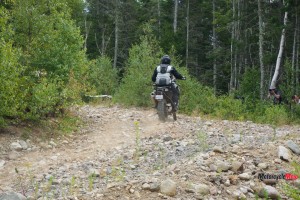 Individual countries around the globe hold competitions to determine the best-in-class competitors, and Canada is no different, submitting a team in all five previous world GS Trophy competitions since 2008. The GS Trophy runs every two years, but every summer there are three GS Challenges across Canada. Consider the off-year events as an education for what you need to know and do for the qualifying-year GS Challenges.

In 2017, local competitors faced off at regional challenges at Rocky Mountain House, Alta.; Horseshoe Valley, Ont.; and Montreal, Que. The top three finalists from each challenge are selected on a points system to compete in the biennial GS Trophy qualifying round, which was held last August near Sussex, N.B., at Adair’s Wilderness Lodge during the Fundy Adventure Rally.

It’s Not a Race 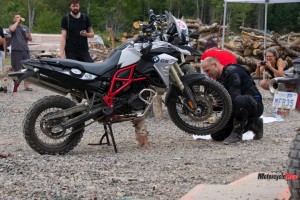 One thing to note: Neither the challenges nor the qualifying round is a race, and not all of the weekend’s qualifying special tests are motorcycle riding related. Rather, the tests are based on a mixture of riding ability, problem-solving, and mental and physical endurance. After all, adventure riding doesn’t take place on a prescribed track. Real-life scenarios, like traversing logs, deep sand or gravel; changing a tire in the wild; and starting an impromptu fire with only items at your disposal could challenge you on any adventure ride, and you have to figure out how to get beyond the difficulties and move on.

The idea of the Challenge isn’t about winning or losing, it’s about camaraderie and team spirit, although I can guarantee all nine competitors worked very hard to get to the qualifying round and desperately wanted to place in the top three. 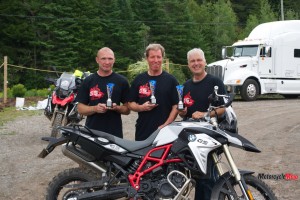 Six of the tests took place on the Friday of the Fundy Rally, while the remaining four tests were completed on the Sunday. Saturday was a fun day for all, as the qualifying competitors and those participating in the rally could slosh around in the heavy rains and mud that composed most of the 2017 Fundy Adventure Rally.

Riders accumulated points in each test. Some tests were timed events, while others were scored based on riding ability; for instance, dabbing a foot down on a tight turn would detract a point from the rider’s total, or, in some cases, stopping in a box and keeping both feet up for one second gained a point.

Some of the timed riding challenges were as basic as straight-line acceleration, performing a tight turn only achieved by fishtailing the spinning rear tire, then back into a straight and finishing with another tight turn to the finish line. Or with a predetermined set of tools and miscellaneous items, the rider had to remove the front wheel, walk around the bike with the wheel and reinstall it. This challenge caused a lot of grief for some of the competitors as bikes fell over, or dislodged brake pads foiled their efforts to reinstall the wheel; others had the job done in no time.

Non-timed events included riding up a hillside with loose, softball-sized rocks, turning 180 degrees at the top and making your way safely to the bottom on a partially different track. Another challenge started with very slow tight turns, then moved on to a log, where the rider had to have the front wheel on one side and the rear wheel on the other side of the log. The ride progressed by spinning the rear wheel on the log to gain forward momentum. That was followed by a sharp turn, then over a series of logs and back through the slow, tight turns to finish.

Some events included pushing the 800GS through deep gravel, lighting a fire with a variety of supplied items, or shooting arrows with a bow at a target while wearing a helmet and riding gloves, all while straddling the bike.

The riding exercises got progressively harder and the riders got more exhausted. The last test was the toughest. Starting on top of a loose dirt and rocky bank, the riders had to go through a pond, head up the opposing bank with a tight turn in the loose soil, navigate up and over a stony hill, traverse a small brook and ride back up the loose, steep embankment. Tough stuff on a 230 kg adventure bike, for sure.

An awards banquet for the GS Trophy qualifier and the Fundy Adventure Rally wrapped up the weekend’s festivities. Huge congratulations to all of the competitors for a job well done in a series of tough tests. In the end, Bela Herman, Jamie Jones and Joel Goulet came away with the highest scores and were selected to represent Team Canada at the 2018 BMW GS Trophy, which takes place in Mongolia from June 3 to 10 – a trip of a lifetime for these well-rounded and highly experienced riders.