Yes, Virginia, there are great motorcycle roads in Nebraska

Okay, so Nebraska wasn’t high on my list of motorcycle destinations either, but research for a book I’m writing about America’s greatest roads required I explore each state from top to bottom. However, on my ride to-do list, there was only a big question mark next to Nebraska. And to make matters worse, I was approaching the triple-landlocked state from the west, having only hours before descending the Rockies with a twisty-road-eating grin on my face.

After much Googling and finding no real answers, I decided to throw out a post to my Facebook friends: “Okay people. I need to find the best road in Nebraska.” I got some pretty funny replies: “The one that leads you out of Nebraska,” “It’s in Southern Nebraska, i.e. Colorado” – that sort of thing, but I also got some promising advice. Though it didn’t sound like a road, “Carhenge” was mentioned several times, as well as the secondary highways in the Sandhills.

When I looked up the Sandhills, I was surprised to learn that more than a quarter of Nebraska is covered with ancient, grass-stabilized dunes, and even more fascinating, this area is also the largest and most intricate wetland ecosystem in the United States, with thousands of lakes and ponds that replenish the Ogallala Aquifer, one of the world’s largest water tables. Between the promise of the Sandhills and the mysterious-sounding Carhenge, my interest was fully piqued as I throttled my loaner BMW K1600 Bagger toward northwestern Nebraska. See, Facebook is good for something.

Molehills Out of Mountains 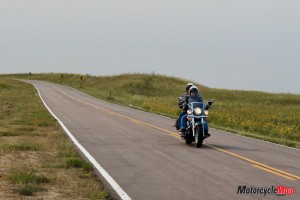 A wildfire burning in Wyoming had spewed enough smoke to smother the sun as it came up over western Nebraska, colouring my first stop, the Scotts Bluff National Monument, a surreal burnt orange. The towering cliffs here were a vital landmark for pioneers travelling west on both the Oregon and Mormon Trails. As I walked a portion of the original path that led the settlers west, I wondered about those sturdy souls and what it would take to journey even this far, not to mention the crossing of those colossal mountains that loomed ahead.

And what would they think of us, flying on our machines, dismissing the Great Plains as boring while making child’s play of mountain passes? As I motored on toward Alliance and Carhenge, I felt a renewed sense of appreciation for my indulgent means of transport.

I intentionally hadn’t Googled Carhenge ahead of my arrival, though I’d guessed it to be some kind of Stonehenge tribute. What I hadn’t expected was how impressive it would be, both in presentation and backstory. One of USA Today’s top three “Quirky Monuments,” Carhenge sits alone on a tidy 10 acres outside the town of Alliance. It utilizes 39 classic American cars – everything from a 1962 Cadillac to a Willy’s Jeep – to recreate the famous assemblage of stones in Wiltshire, England, built by mysterious means some 3,500 years ago.

Build It and They Will Come 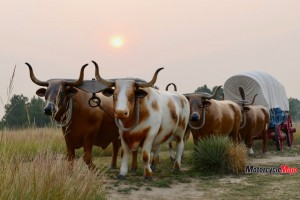 The car version is credited to Jim Reinders, though its construction was a family affair. Reinders’ father, Herman, had originally lived on the site where Carhenge now stands, and it was during his memorial service in 1982 that Reinders came up with the idea to build the replica in tribute to his father, a car fanatic. The family voted in favour and decided to reconvene five years later to begin construction, and impressively, they did just that, dedicating a completed Carhenge to Herman in 1987. Reinders recalls that the Herculean effort required “a lot of blood, sweat and beers” from the family, and though the City of Alliance thought it was a poor use of land, initially mandating a demolition order, it eventually came to its senses and realized Carhenge was probably the most interesting thing about Alliance.

Carhenge was certainly what had brought me to the town, though it was the enchiladas at Mi Ranchito Restaurant on Flack Avenue I might return for. And yes, I realize we’re halfway through this story and I haven’t ridden any great motorcycle roads, but it did look promising as I rolled east and began zigzagging up and down all the secondary roads between Highway 20 and Highway 2, aka the Sandhills Scenic Byway. 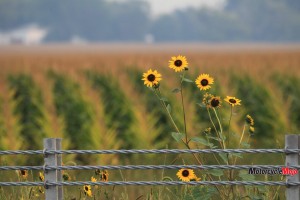 It was early September when I rode across the Sandhills and Nebraska’s yellow coneflowers were going berserk, lighting up the roadsides with sunny ground-borne cheer that I felt as much as saw as I leaned into the first bona fide set of corners, having left Hwy 2 in Lakeside to ride up Nebraska 250 North. Here State Route 250 swoops and swirls across the dunes, up and over rises and down across wet fields littered with cattails and birds of every feather.

Now, I’m not a birdwatcher, but I was impressed by the density of fowl in this region, which turns out to be part of North America’s Central Flyway, a kind of freeway for migratory birds. The bounty of ponds and lakes in the area invite layovers for geese and ducks and cranes, all of them frisking around in the grassy water, adding sound and movement to the otherwise quiet daisy-yellow landscape.

There are few trees along this stretch of road, fewer homes and almost no humans, which felt just fine to me, a loaner who rides more for the headspace it invites than for the attention it brings. In fact, the only sign of human life I saw on the 78 km stretch between Lakeside and Rushville was one cruiser rider who took a very wide line around me as I snapped photos of him from the side of the road. I’m sure it seemed really weird, but there just wasn’t much else to photograph out in the Sandhills, just a bunch of perfect corners, wild daises and all those birds. Which is pretty much paradise if you’re out for a ride. As the 250 snaked north, it also passed a nice-looking park at Smith Lake, where I saw the other biker pull in for a rest, though I rolled on to Rushville in search of gas and food.

Rushville is one of those 21st-century small towns in the U.S. that stands proud yet feels utterly empty. Sturdy, well-kept storefronts line its Main Street, but when you look closely, half the windows are boarded up. There’s no one on the sidewalks, but someone still waters all the planted flowers. It seems so much of America’s interior is being strangled this way: small shops that can’t compete with a Walmart three towns away, diminishing services and opportunities, kids who don’t want to farm. The only place open on Main Street was the Twisted Turtle Pub, so I stopped in for an early dinner: a little homemade pizza that was quite tasty.

An older guy at the bar having an early beer asked me about my bike and we got to talking about Nebraska. He said he’d worked on the railroad until the local line was abandoned in 2007 due to a lack of grain shipments. He grumbled about how the economy in the towns along Route 20 that parallel the tracks have gone from bad to worse, and most everyone still young enough to work has moved away. I throttled on to Gordon and then dropped south on Hwy 27, which promised to be as serene and twisty as 250 and just a little longer (115 km).

There were more ranches on this road, guys who waved from their tractors and cattle grazing among the pelicans and geese, but it was indeed another great motorcycle road with lots of empty sweepers and whoops where the dunes were steep. Nebraska Road Note #14: “Tell people to be careful when pulling to the side of the road in the Sandhills because there will be – duh – sand.”

Back on the Scenic Byway headed east, I wanted to check out the Nebraska National Forest because, well, how many of us knew there was a huge forest in Nebraska? At 574 square kilometres, it’s actually the second-largest hand-planted forest in the world, the work of a botanist named Charles Bessey, who in the early 1900s wanted to see if the ancient pine forests that once covered the Great Plains could be recreated to provide the growing nation with a timber reserve.

It turned out the pines couldn’t grow sturdy enough to be timber producers, but the thousands upon thousands of trees that remain do provide welcome shade for an awesome-seeming recreational area, the Bessey Ranger District, which draws campers and off-road enthusiasts from far and wide. In fact, everyone seemed to be having such a great time, I was wishing for a dirt bike and another day so I could chase them into the sandy woods. But nope, for me it was off to investigate the next state, feeling very confident that the loop I’d ridden earlier in the day wasn’t just some booby prize, but a truly Great Ride, and well worth recommending – maybe especially to introverts, or those accidentally a day ahead of schedule on their way to Sturgis, South Dakota. Regardless, it turns out that Nebraska held more than a few surprises, and some really great riding, too.