Having grown up on a farm in Alberta, Scott Wilson is familiar with making things work with what’s available. It’s that simple can-do attitude that informs Wilson’s creativity when he is working on a custom motorcycle. He’s built a few machines, including his latest café racer-style 1974 Honda CB450 that’s heavily influenced by his appreciation for Quentin Tarantino’s Kill Bill films and Japanese pop culture.

Wilson didn’t grow up around motorcycles, however, and his first street bike was a 1976 Honda CB360 given to him for free 10 years ago, when he was in his mid-20s. While the Honda’s engine ran, the rest of the motorcycle was rough and it was an ideal candidate for a makeover. An autobody technician by trade, Wilson enjoys making things his own, so he began tinkering with the Honda.

“I was thinking of building a chopper,” Wilson says, adding, “But my uncle Ethan suggested a café-racer would be a better direction to head.”

A Change of Wheels 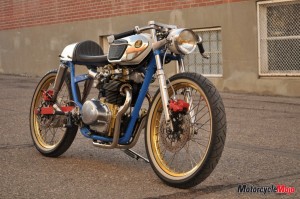 Adding a tail fairing and different forks, Wilson rode the CB360, then upgraded to a Kawasaki KZ750 twin. Some of the parts from the Honda found their way onto the KZ750 café build, and that’s a bike he kept on the road for a season until the simple lines of a Yamaha XS650 engine captured his attention. Eventually, Wilson found an abandoned XS650 that he was given for free. With a David Bird weld-on hardtail Wilson turned the Yamaha into a board track racer-style custom.

“I rode that bike a lot, taking trips into British Columbia and other spots,” Wilson says. “But, I was missing the sporty feel in the ride and wanted to get back onto a café racer; they’re just more nimble and much more fun.” With that mindset, Wilson bought a donor 1974 Honda CB450 that had been painted rattle can black. It quickly came apart, and pieces that were not going to be reused, such as the fenders, gas tank and all of the electronics, were set aside. 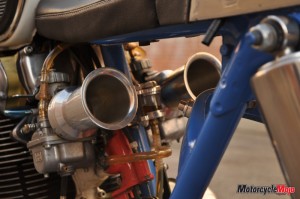 “I had a muddy idea of my final goal, and because I’m a fan of Tarantino’s Kill Bill franchise, I envisioned building a motorcycle that assassin O-Ren Ishii could use as a get-away vehicle. And I wanted it to be as precise as a Hattori Hanzo sword.” (Hanzo is a historical figure portrayed in the Kill Bill films as a world-renowned sword maker who produces samurai blades of exceptional quality.)

“His swords were precision made instruments, and I wanted my bike to reflect that craftsmanship. Some of the pieces on the Honda might fall short of his work, but it’s designed to suit O-Ren Ishii as an assassin’s escape machine.”

He’d already begun referring to the project as “Shinobi,” a name that in Japanese means “to sneak.” Also another term for ninja, a shinobi was a warrior operating as a covert agent in feudal Japan. 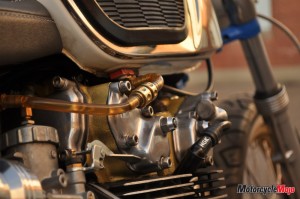 Moving forward, Wilson already had a 1968 Honda CB160 gas tank, and he modified the tunnel to fit the ’74 CB450 frame. From the Old Motorcycle Shop in Calgary, Wilson picked up a used Hodaka headlight. To his eye, the shell is nicely proportioned and it could house a 58 mm GPS speedometer from Speedhut. With the GPS speedo, there are no cables, and the Hodaka headlight keeps things simple and clean.

Wilson had considered running a set of modern inverted forks, but instead used a Honda CB650 front end. The lower triple is CB650, but the top clamp came from Cognito Moto. The forks were internally lowered 76 mm.

Next, Wilson bought a made-in-India metal tail section that’s a Ducati replica. He had Kenny Kwan of Ill-Fated Kustoms bend up a rear seat hoop that Wilson then welded in place behind the upper shock mounts. He placed the tail section so the bottom lines would match those of the gas tank. To him, this is one of the most critically important aspects of building a café – if the lines don’t flow, it doesn’t look right.

A long box-channel steel swingarm was fabricated to increase the overall profile of the Honda. He got started by harvesting the front pivot tube from the CB450 swingarm and then laid out the steel, and pie-cut and bent the channel before welding everything closed. The lower shock mounts are clevises cut off old shocks, flipped around and welded to the swingarm. Rear shocks are special order 12.5-inch shrouded Hagons with limited travel of 3.8 cm.

Online, Wilson had stumbled across an image of a Honda CB750 modified with 21-inch wheels front and rear. The way the larger wheels filled up the motorcycle resonated with him, and it was a look he wanted to replicate. Because he wanted to run disc brakes, Wilson laced Suzuki GS750 hubs to gold-anodized 21-inch motocross rims with Buchanan’s Spoke and Rim stainless steel kits made especially for the GS hubs. Tires are Shinko 2.15-21-inch, and they are both meant or front fitment.

The floating disc brake rotors are both from a Suzuki GS1100, while the calipers are from an unknown Honda model. To keep the front end as clean as possible, Wilson mounted the Norman Hyde “M” bar upside down, below the top triple clamp in a set of alloy chopper risers.

Inverted levers operate the clutch and front brake, and all cables are internally routed through the bar. In fact, to make the front brake work, Wilson ran a cable to a master cylinder mounted between the carburetors on the frame’s backbone, and then ran a hydraulic line forward to the brake caliper. A Honda Super Cub internal throttle was made to fit the Hyde bar, and that involved some intricate work on a milling machine.

“I’d say about 50 per cent of the effort on this bike was spent working on the handlebars,” Wilson says with a laugh. The horn (mounted inside the tail fairing) and all lights, including discreetly mounted front and rear motogadget m.blaze pin signal lights, are operated through motogadget m.switch two-
button controls on the bars.

When it came time to paint the Honda, Wilson borrowed Robb Hoefling’s personal shop in Langdon, and over a weekend had all parts colour finished.
“I always like to see a little colour on a motorcycle, and really like the vibrance exhibited in Japanese pop culture,” Wilson says of his choice of hues.

Early in 2017, with everything assembled, Wilson fired up the bike, only to discover oil pouring out of the right-hand cylinder. When he pulled the engine apart, he discovered broken rings and quickly dove into a top-end rebuild with 2-mm oversize pistons. Fuel and air mix in Mikuni VM32 carburetors, and exhaust moves through a sinuous two-into-one header that hugs the motor before joining under the sump and exiting low by the right side of the swingarm.

“I’m not O-Ren Ishii, but I’ve been running it around the city and it gets lots of looks,” Wilson says.

The last time Wilson had it parked in downtown Calgary, he returned to find a business card tucked into the spokes of the front wheel.

Wilson concludes, “Someone else liked it, too, because written in ink on the back was ‘If you ever decide to sell,’ and that’s cool when you build something that you like that someone else thinks is cool, too.”