A brief history of the Vincent 998 cc V-twin brings us to the Ehret Vincent, arguably the most important Black Lightning in existence and one of the world’s most famous, and expensive, motorcycles

Seventy years ago, the Vincent Black Shadow delivered the most performance from a street-legal vehicle that money could buy, on two wheels or four. Officially timed at 122 mph, it outsped the Jaguar XK120 two-seater sports car, which was then the world’s fastest production car, making the Shadow the first true superbike of the modern era. Vincent’s countless road-racing and speed-record successes testified to the inherent performance wrapped up in the British firm’s 50-degree V-twin engine – so much so that attempts to run a 1,000 cc Clubman’s TT in the Isle of Man floundered after just three races, all won by Vincents, with the others nowhere in sight. Indeed, in the final 1950 edition, only Vincents took part; nothing else on two wheels could compete with the vivid performance and exceptional handling by 1950s standards delivered by the 998 cc motorcycle created by legendary Australian engineer Phil Irving. 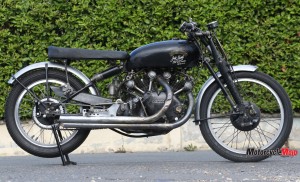 The ultimate Vincent was the Series C Black Lightning, a production version of the bike on which Rollie Free had broken the AMA’s Land Speed Record in 1948 on the Bonneville Salt Flats, with a similar engine specification. First exhibited at that year’s Earls Court Show in London, England, and available only by special order, the standard Black Lightning was supplied in racing trim, with tach, Elektron magnesium-alloy brake plates, special racing tires on alloy wheel rims, rear-set foot controls, a solo seat and aluminum fenders. This reduced the stripped-out Black Lightning’s dry weight to 172 kg, against the road-going Black Shadow’s 208 kg. Its 998 cc air-cooled engine was upgraded with higher-performance racing components, including Mark II Vincent cams with a higher lift and more overlap, stronger 85-ton Vibrac connecting rods with a caged roller-bearing big end, polished flywheels and Specialloid pistons delivering a 13:1 compression for methanol fuel. The combustion chamber spheres were polished, as were the valve rockers, and streamlined larger inlet ports were fed by twin 32 mm Amal 10TT9 carburetors. The four-speed gearbox was beefed up to transfer the extra power, amounting to at least 70 hp at 5,600 rpm (compared with a road-going Black Shadow’s 55 hp), and a top speed of 150 mph.

The Black Lightning’s genesis is the stuff of legend for Vincent enthusiasts, and it essentially began with London Vincent dealer Jack Surtees, the father of future world champion and Vincent factory apprentice John Surtees. Jack had been racing a Norton sidecar with some success, and in 1947 ordered a Rapide from the factory with some special tuning parts. This engine was built at Vincent’s Stevenage plant alongside a second such engine, which was then loaned to George Brown, the firm’s experimental test rider since 1934, who gave the ensuing bike its competition debut at Cadwell Park in 1947. For the unlimited capacity Hutchinson 100 race at Dunholme later in the year, Brown’s special Rapide was further improved, enabling him to finish second in the race to Ted Frend’s works 500 cc AJS Porcupine – a bike that would win the inaugural 500 cc World Championship in 1949. 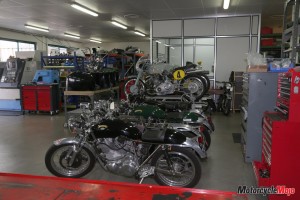 However, unlike the AJS, the Vincent could be refitted with silencers for Brown to ride it the 120 miles back to the factory after the race! In this guise, it was tested soon after by journalist Charlie Markham of Motor Cycling magazine, who was ecstatic in his praise for the special Vincent, pinching the title of Rudyard Kipling’s poem “Gunga Din” to describe it. In this, a British army officer’s life is saved by a lowly Indian water bearer, prompting him to remark, “You’re a better man than I am, Gunga Din.” Markham’s inference was that the Vincent’s capabilities far exceeded his own, and the nickname stuck, so that Brown’s increasingly successful bike henceforth became known as Gunga Din (see Motorcycle Mojo April 2011).