A history lesson of sorts led to a change of plans for this rider.

I had been riding my BMW F650GS for four hours by the time I glimpsed Old Hedley Road. The secondary route east of Princeton, B.C., is a scenic and twisty road winding its way along the north side of the Similkameen River and it’s a touring motorcyclist’s dream. A slower pace allowed me to take in the dry and desolate scenery, featuring towering hills covered in sagebrush and ponderosa pine. The sun was starting to sink behind me.

My destination was Nakusp, B.C. I was registered as a presenter at Horizons Unlimited (HU) Canada West, a travellers’ meeting gathering many motorcyclists and tucked among some of the choicest riding roads in southeastern British Columbia. I wanted to divide the 700 km journey in two, and visit a part of the province I hadn’t seen before. Pulling into a two-tracked gravel driveway, I halted my GS before a dog sporting a blue handkerchief around its neck. The house behind him featured beautifully stained wood, and I looked forward to my bed for the night. Colleen Stevens emerged to welcome me at her bed and breakfast. 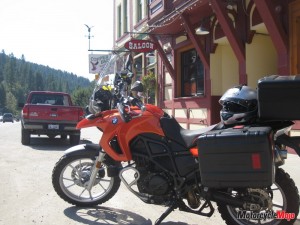 It wouldn’t be long before I was chatting with her and her neighbours Clint and Vicky about the origins of the road I had just been riding. Old Hedley Road was built on the foundation of the Dewdney Trail, itself a foundational road in the 19th-century development of the province. I was riding on a bit of B.C. history. Gold was discovered along the Similkameen in the mid-1800s, and then governor James Douglas wanted to establish a presence in the area. So, he hired engineer Edgar Dewdney to create a trail that would throw the province’s weight around as thousands poured over the border to search for a claim.

Colleen told me she went to school with Dewdney’s granddaughter. Vicky said her mom was writing a book about Jack Budd, horse breeder and associate of outlaw train robber Billy Miner, both Princeton residents soon after the start of the 20th century. This is why I like staying at B&Bs; I get to know locals with fascinating connections with the place they call home. 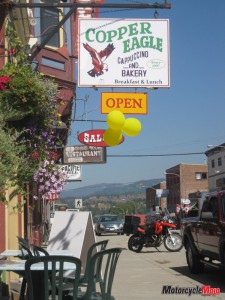 The afternoon would be spent riding Highway 3A, Hwy 97 and glorious Hwy 6. The colourful fruit stands of Keremeos tempted me, but I veered off the Crowsnest onto Hwy 3A. I was reminded how my family would stop on childhood summer vacations to pick up a box of peaches for the trip home to Vancouver Island.
I think it was those holidays that gave me the itch to travel how I do now. As a kid in the back seat of my parents’ Ford LTD, towing a tent trailer, I got to wondering where a passing gravel road led and about the story behind a collapsing farmhouse.

I meandered along Hwy 97, mere metres from the shoreline of Okanagan Lake. Soon I would fuel up in Summerland. I twisted the throttle a little more.
The approach to the junction with Hwy 6 was full of anticipation. I couldn’t wait for its twisties, remoteness and scenery. Once past Vernon, there were several small communities, such as Lumby and Cherryville, while heading east. The landscape became heavily treed as I twisted my way to Monashee Summit, over 1,200 metres above sea level. It was here that the journey took a sinister turn, at least in appearance. 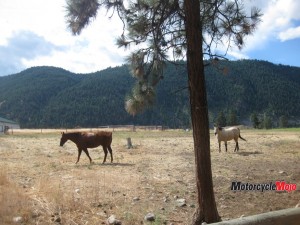 Wildfire reports showed a clear path. The sweet yet dirty smell of fine particulate matter in the air was telling me different. The road was empty but for the Subaru wagon behind me. Most of the traffic was going the other way, in clumps deposited off the upcoming Needles–Fauquier ferry. The sun was going red, and I twisted my throttle a little more to try to outrun the smoke heading east. I hoped the source of the smoke wasn’t ahead. It came from the Joe Rich fire east of Kelowna, which had started in tinder-dry conditions that afternoon.

The smoke eventually dissipated. My thoughts, along with my surroundings, became less dark. Just as I was starting to get into the exciting turns and switchbacks of the descent to Lower Arrow Lake, three ravens, nibbling on something by the left side of the road, suddenly launched toward me. Two flew high, but, in a surprising move, one aimed straight for me. I raised my left arm to protect myself. Just as a collision seemed inevitable, the raven spasmodically banked right, sparing me the act of recovering from imbalance. It was my emergence from the dark part of the journey, and it was smooth riding all the way downhill to the cable ferry across the lake.

I parked my F650GS on a downhill behind an RV. To the left was a sign informing me that priority boarding for motorcycles did not apply on this ferry. Not to worry, as there were only four vehicles lined up for the next sailing. I was at Needles. As a result of the completion of the Hugh Keenleyside Dam in Castlegar in 1960, Needles was now underwater ahead of me. There wasn’t much left above the waterline but a cemetery and the ferry landing. Not all ghost towns are dry.

A five-minute ferry ride brought me to the last bit of Hwy 6. High winds from the west and more smoke had me angling the bike to the left as I took turns aggressively, keen to make it to the Nakusp and District Sports Complex in time to register and eat dinner with friends. Even in the red light of the setting sun, the quaint town of Nakusp looked welcoming. Many other adventure motorcycles were visible in the town. I had come to the right place and my dinner was waiting for me.

The next day, my PowerPoint presentation was projected on a screen behind me in a de-iced curling rink. I had a prepared introduction for the two dozen folks kind enough to listen to my historical riding adventures. Instead, I dropped my original introduction and told them of the people steeped in history I had met east of Princeton as I rode the twisty and scenic Old Hedley Road, based on one of the oldest trails in the province. I told them of the awesome ride that is Hwy 6 east of Vernon and the wildfire smoke and the drowned town of Needles it led me to. I told them that there are plenty of amazing roads to ride in B.C., and plenty of stories as to why they were built in the first place.

There are more than I can count, and plenty more roads yet to ride.