An important bike for KTM in a highly competitive middleweight market

KTM has made a key roll of the dice with the introduction of the 790 Duke, its first-ever parallel-twin powered by the all-new LC8c (liquid-cooled, eight-valve compact) engine.

Previously, KTM had only its 690 Duke single-cylinder niche model to compete in the significant segment that is the middleweight marketplace. Now, with the 790 Duke twin – aka “the Scalpel,” on account of its focused design and pared-to-the-minimum weight and bulk – KTM has a mainstream contender for marketplace supremacy, making this a vastly important bike for the company that’s both competitively priced and highly distinctive. What’s more, in transferring production of this and all other future middleweight KTM – and Husqvarna – models powered by the LC8c engine to China in 2020, KTM president Stefan Pierer will ensure that the 790 Duke, its forthcoming 790 Adventure due in a year’s time, and other later models will all be even more affordable.

With its typically sharp-edged styling by Kiska Design, the 790 Duke fills the gap between the 690 Duke single and 1290 Super Duke V-twins in the Austrian firm’s streetbike range, and in doing so brings an entirely new level of electronic sophistication to the middleweight sector, with features that some Japanese one-litre sport bikes don’t even have. Delivering a maximum power of 105 hp at 9,000 rpm with a dry weight of just 169 kg, it’s a typical KTM in terms of adding performance via reduced kilos. And in addition to a comprehensive and easily readable TFT dash and two-way quick shifter as standard, it features electronics previously seen only on bigger bikes, including inertial measuring unit-controlled traction control and cornering ABS. 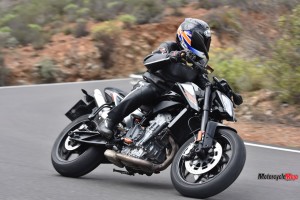 Company engineers began creating the LC8c motor back in 2012; since then, the 250 people engaged with the project in research and development invested more than 111,000 man-hours (okay, several woman-hours, too), with 60 of them working full time on it, covering 604,800 km of intensive dyno testing and over 900,000 km on the open road. KTM doesn’t do things by halves, but even so, the fact that they invested so much time and money in getting this platform right indicates how important the project is to the company’s future growth strategy.

First, though, they spent two years considering whether to produce a downsized middleweight version of their larger capacity 75-degree V-twin family of engines, before settling on a DOHC eight-valve parallel-twin. “We had to get this right because it will be such an important platform for us for many years to come,” says Torsten Gaul, the Austrian firm’s head of engine R&D. Gaul says that after evaluating the two formats, it became clear the V-twin configuration would not be suitable, given he says their “main goal was to get the engine as compact as possible. With the V-twin, you have limitations regarding the seat height, because the rear cylinder sticks up into the seating area, and the engine is also longer, which means you must have a shorter swingarm for the same wheelbase, whereas we wanted a longer one for better grip. Also, the height of the engine with the throttle bodies between the vee also brings disadvantages for packaging reasons, so we decided to go with the parallel-twin format.” 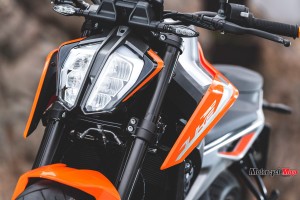 KTM paid special attention to keeping the 88 x 65.7 mm, 799 cc engine not only light, but also narrow to help maximize cornering clearance, as well as to suit riders of all heights. “We wanted to make a bike that’s intuitive to ride, that’s light and responsive with the extra performance of a twin, but without sacrificing the agility of a single,” says Adriaan Sinke, LC8c product marketing manager. Also key was the fact that it centralizes the mass of the engine, enabling the engineers to design a more compact, easier-handling motorcycle. Plus, to be in line with the firm’s “ready to race” philosophy, they wanted to establish a visual link with their motocross bikes. Consequently, the parallel-twin concept won out.

The result is a lightweight, liquid-
cooled engine with its crankpins offset by 75 degrees with 435-degree firing intervals to replicate the gritty sound of a KTM V-twin’s irregular firing order, fitted with twin counterbalancers to eliminate vibration – one at the front of the engine and one in the cylinder head. Thus, the LC8c engine can be employed as a stressed member of the frame, which in KTM tradition is made from tubular steel, with a die-cast aluminum rear sub-frame and an “inside-out” swingarm operating the non-adjustable (except for spring preload) direct-action cantilever WP shock giving 150 mm of travel, matched up front by a 43 mm upside-down WP fork that’s equally devoid of adjustment, but gives 140 mm of travel. 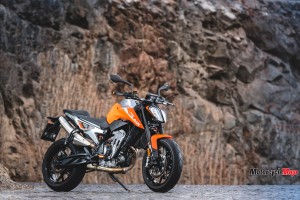 The LC8c is tuned as much for mid-range torque as top-end power, peaking with 63 ft-lb at a relatively high 8,000 rpm for a parallel-twin, but there’s a broad spread throughout the rev range, with more than 59 ft-lb available at 6,000 rpm. The chain drive to the cams is offset to the right of the cylinders, while the six-speed gearbox allows clutchless quick shifting both up and down the well-chosen ratios, and is matched to a power-assisted slipper oil-bath clutch, which is cable-operated for easy maintenance and to save weight. The entire very compact engine weighs just 50 kg without throttle bodies or oil (53 kg with those included), Gaul says, compared with 41 kg for the 690 Duke’s single-cylinder powerplant on the same basis.

That’s pretty amazing for an 800 cc twin-cylinder engine, and you definitely feel the result when riding the bike. After being honoured with a brief getting-to-know-you ride last September on the prototype 790 Duke, the chance to spend a whole day on the grippy roads of Gran Canaria, Canary Islands, including a couple of hours riding the island’s Maspalomas circuit, allowed for a more intensive evaluation. As with the first time around, the 790 Duke felt small, slim, short and sporty, with a close-coupled riding stance that has your chin seemingly over the front wheel. It’s a responsive, eager-revving bike that’s not only thoroughly practical, but also hugely entertaining, and totally intuitive to ride. It’s one of those bikes where you feel a part of it from the very moment you hop aboard – this could make riding to work a lot of fun, though maybe not half as much as taking the long way home on it.

With four engine modes available, I started out using Street mode before switching to the slightly sharper but still super-controllable Sport map – there’s also a Rain mode, with a smoother pickup and reduced power, as well as Track mode, which is sharper than Sport for racetrack use, though even that has a crisp but controlled pickup from a closed throttle that’s not at all snatchy. The LC8c engine pulls cleanly wide open from 3,000 rpm upward, with a crisp throttle response in both Street and Sport – I ended up using Sport all day, even in traffic and tight, twisting mountain roads. It pays to surf that flat torque curve, so short-shifting wide open at 7,000 rpm, rather than the 9,500 rpm redline, gives you plenty of acceleration en route to 160 km/h on the TFT dash, with the prominently marked gear-selected reading always readily viewable at a glance.

Vibration was never an issue at any revs en route to a top speed of about 225 km/h, though Gaul admits his team deliberately left in just enough vibes to give the engine some character, which it has aplenty. The two-way powershifter is superb, delivering light, positive wide open gearshifts under acceleration, and equally positive downward clutchless shifts accompanied by a great-sounding autoblipper. I didn’t miss a single gear in a 230 km day of riding.

The 790 Duke’s steering geometry is pretty steep, with 24 degrees of rake and 98 mm of trail, delivering a 1,475 mm wheelbase, and that’s likely the reason for KTM fitting a non-adjustable WP steering damper behind the lower triple clamp. But the Duke’s agile, super-responsive handling is the payoff for that, coupled with total stability on fast third- or fourth-gear turns – it feels planted to the tarmac, yet the great leverage from the wide 760 mm tapered aluminum handlebar lets you carve corners and especially switch direction in fast chicanes like the one at Maspalomas really easily. As I said, it’s intuitive. That handlebar can be adjusted almost infinitely in search of your preferred riding position – in addition to four different clamping positions offered by the upper triple clamp’s design, you can also rotate the bar through three different angles to get comfortable with it. Then, as well as the stock 825 mm seat height, there’s also a lower 805 mm seat option available from the extensive KTM aftermarket catalogue, or you can reduce it still further to 780 mm via a lowering kit.

Even though KTM has obviously aimed to keep costs down with the non-adjustable WP suspension, the generous travel is well controlled in everyday use, and after a day spent trying my best to fault their choices, I must admit that KTM’s development team got their settings for it just right. I’d never ridden on Maxxis tires before I tried out the 790 prototype, but the Taiwanese manufacturer whose products are on most of KTM’s off-road range have done a good job here with its Supermaxx SP street rubber specially designed for the 790 Duke’s lightweight 17-inch cast-aluminum wheels. The 180/55ZR17 Maxxis rear tire will be another factor in the nimble handling, too.

The twin 300 mm front discs are gripped by four-piston radial calipers from Spanish company J.Juan, and these stop the bike well with lots of feel, without using the large 240 mm rear disc very hard at all. The settings for the slipper clutch have just enough engine braking left dialed in to help you stop for a second-gear hairpin from high speed without chattering the rear wheel on the overrun. Plus, the settings for the clutchless autoblipper are so ideally chosen that you hardly have to use the brakes climbing a twisty mountain pass – just backshift a couple of times for a slow bend, and the residual engine braking invariably takes care of slowing the bike in normal use. The clutch action is superlight and positive when you do have to use it. This won’t cramp up your left hand when riding the 790 Duke to work each morning.

Even braking hard at the end of the Maspalomas circuit’s main straight after enjoying the extra performance provided by the street-legal Akrapovic silencer (available as an option) fitted to the bike I was riding there, the 790 Duke remained stable and well controlled – and the Maxxis front tire was hard to fault. The Bosch 9.1 MP ABS did activate occasionally, but after proving to myself that it did cut in – though not too intrusively – I switched it off, as you can do in Track mode only. The non-adjustable suspension didn’t misbehave too much, and you have plenty of warning when the tires start to approach their limits.
KTM is planning a 790 Duke Power Cup road racing series around the world, and I can’t think of a better bike for newbies and returnees, and everyone in between, to go and have a weekend of fun aboard, trading elbows on the track and revving each other up in the bar at the end of the day. In 100 per cent stock street mode, the 790 Duke can be ridden pretty hard in something approaching anger without misbehaving, and it totally fulfils the expectations that something painted orange brings to the party – and at a relatively inexpensive price. Ready to race, indeed.

Although it won’t be available in Canada until late 2018, the 790 Duke is a very good motorcycle that sets the bar higher for its rivals in that crowded middleweight category, and it’s in every way a true KTM, replete with the brand’s core values. This is a very impressive real-world ride.