The highway widens into four lanes as the steady kathump kathump kathump of the cemented road pulsates through my handlebars. Approaching Bradford, Pennsylvania, Tina and I catch the light scent of oil wafting in the air and pass by the telltale nodding donkeys as they teeter-totter tirelessly, pumping high-grade crude, just as they have for the past 150 years.

Rolling through Bradford on our way to Kane, I’m wondering what Transylvania, Spotsylvania and Pennsylvania all mean. Apparently, sylvania means “woodland” in Latin, so literally, this is “Penn’s Woods.” A rather appropriate name given that America was over 90 per cent forest when the first Europeans arrived.

In 1681, long before motorcycles were invented, William Penn, a devout Quaker, approached King Charles II of England and requested that a family debt be repaid. The king resolved this by bequeathing Penn what is the present-day states of Pennsylvania and Delaware. Incidentally, the man on the Quaker Oats cereal box until 1946 was the one and the same William Penn. 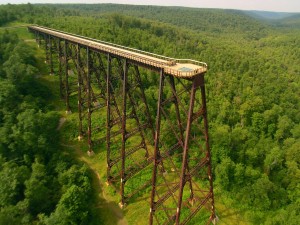 It’s morning, and deep in the Allegheny National Forest, at the Kane Manor Country Inn, the frigid reality is 0 C, and last night’s cold and gloomy mist hangs in the air. After a week of temperatures near 30 C, this is bone chilling, so we dawdle over breakfast waiting for the mercury to move. The town of Kane was named after the Civil War hero General Thomas L. Kane, who was Presbyterian and a personal friend of the Mormon leader Brigham Young. Kane was instrumental in providing safe passage to Utah for Young and his followers.

All bundled up and feeling like Bib, the iconic Michelin Man, we stiffly climb aboard the 1200GS and meander out of town on PA 6. Gotta love those heated hand grips on a cool morning! The road is still wet and we feel like the only people on the planet. No cars, trucks or visible signs of life anywhere.

At Ludlow, a little signs says “Tionesta Overlook,” so, deviating from my plan, we wind upward into the mountains. The road soon changes to single-lane gravel, but fearlessly I roll onward, imagining a magnificent overlook of the surrounding mountains and vibrant autumn colours. After a half hour, and no end to the road and no overlook, we disappointedly head back down the mountain.

Route 6 winds through the hardwood forests, and the pleasant aroma of smoke curling lazily from chimneys completes the wilderness theme. It’s autumn in the northern hemisphere, and although the flora is dying all around us, it’s still a beautiful sight to behold as my new toy, a BMW R1200GS, thrums a pleasant ode to my ears. 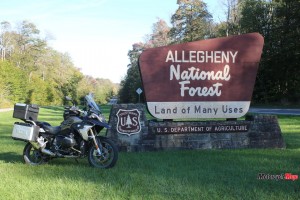 Approaching Warren, we take PA 59 high above the Allegheny River – a nice, newly paved mountain road. Terracing high above the river, we park the bike at an information centre, where we catch an incredible view of the 55-metre-high Kinzua Dam. Water cascading forth from the dam in great white plumes not only creates electrical power, but also controls flooding. In 1936, the Allegheny overflowed her banks and flooded the city of Pittsburg, more than 225 km downstream. As a result, Congress passed the Flood Control Act, and decades later, with much controversy, John F. Kennedy signed the legislation to begin dam construction. The resulting Allegheny Reservoir created Kinzua Lake and submerged over 10,000 acres, one-third of the Seneca Reservation. The controversy still rages on today.

Pennsylvania Route 59 goes past the Longhouse National Scenic Drive, a picturesque American Scenic Byway that unfortunately is closed the day we arrive due to construction. Around a curve I spot the sign for the Rimrock Overlook, so we wind through a forest of oak and cherry to a parking area. Several sets of stairs take us down to a huge outcrop on the face of the cliff and a stunning panorama of the Allegheny River, slipping silently between the surrounding mountains on her path to the mighty Ohio River. I install my polarizing filter on my camera, bring the camera into position to point and shoot, and the filter slips off, falling 30 metres into the forest and rocks below. That was a clumsy, 50-dollar mistake.

From Rimrock Overlook we turn onto PA 321, a plunging road that twists and turns into a forested valley floor with mountains looming large all around. With not a car or human in sight, we thread through the forest on this breathtaking journey and I feel like an early explorer may have felt, minus the comfort of a paved roadway, of course. This is not a place to hone one’s racing skills. Overdo it and you might not be found for hours. Here, a Spot GPS tracking device makes much sense. 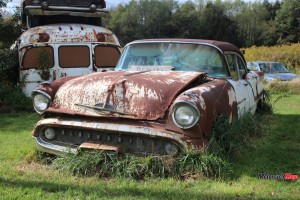 At PA 346 we wind our way toward Bradford, and about 8 km before town, through the tall pines, I see a beautiful covered bridge and the Marilla Reservoir. (In 1992, I helped build a 36-metre clear-span covered bridge in Guelph, Ontario, and since then have become somewhat of a covered bridge aficionado.) I have to stop and inspect, only to find that it’s a wooden bridge resting on steel I-beams. That’s cheating! Although pretty, it is not an authentic covered bridge from the old school.

Coasting downhill, following the meandering Tunungwant Creek, we pass through the beautiful University of Pittsburg and into Bradford. The hills should be covered with vibrant colours, but are not for the unseasonable mild weather. Bradford was a bustling oil town and is still the home of Kendall Motor Oils. High-grade oil was discovered here around the time of the Civil War, and the wells are still producing high-grade crude. By 1881, the Bradford Field provided more than 90 per cent of the national oil supply, but these days, Bradford is reinventing itself as a tourism destination.

Escaping from urbanity, we scoot south on PA 770 and re-enter the Allegheny Forest. At Custer City, PA 770 takes us
to PA 59 again, and then onto the PA 321
Scenic Byway. We cruise down this delightful roadway back to Kane, where a delectable lunch at Texas Hot Lunch/4 Sons awaits our palates. In 1911, James Bechakas emigrated from Greece and opened the Texas Hot Lunch, and has been in business continually since 1928. Ninety years later, the business is still owned by the Bechakas family.

Taking legendary PA Route 6, we head east to Mount Nebo Lutheran Chapel in the township of Mount Jewett. Surrounded by generations of pioneers’ graves, this beautiful octagonal building is a historical testament to the abundance of Swedish immigrants who settled this area, their new home in America.

Continuing along Lindholm Road, the bike eats up the winding ribbon of black through the deciduous forest to PA 59. At Ormsby, Conner’s Auto Parts is a veritable treasure trove of antique cars lined up in rusty rows on the hillside.

Just as I begin to relax on a straight section of PA 59, a deer grazing at the side of the road captures my complete attention. As we ride carefully by, it’s reaffirmed that wild animals were here first and are an ever-present danger. At PA 321, again we enjoy another incredible ride along back to Kane. After a healthy carving of prime rib at Bradford’s Beefeaters Restaurant, located in the repurposed Carnegie Library, we head back to the Kane Manor and a warm, comfortable bed.

Maybe age has made me a bit choosier, but nothing makes me lose my zeal for riding more than a frosty morning, and the next morning has all the ingredients. It’s -2 C, and thankfully I covered the bike the night before, or I would be wiping the frost off the saddle. Again we hover over breakfast waiting for Old Sol to warm things up a bit.

We are off again on PA 321 to PA 6, which will take us over to Sheffield and the PA 666. If this is the number of the beast, we certainly saved the best for last. Twisting along the winding blacktop, the GS is eager to eat up the chicken strips as we peg-scrape back and forth between the trees following Tionesta Creek. Ahead, the sign says 30 mph, and just beyond, the road is swallowed up again by the forest. Glancing left I see an inukshuk in the middle of Tionesta Creek. Someone has had some extra time on his or her hands.

Rounding a curve and emerging from the twilight of the forest, a black bear presents himself, standing in the middle of the road directly in our path. I slow down, getting Tina’s attention, just as he unconcernedly shuffles off into the bush. Helmet cameras were made for moments like this. But all too soon the 50 miraculous kilometres of PA 666 comes to an end at US 62 and the mighty Allegheny River. In Tionesta, we take a break on a town park bench as Tina studies her paper GPS – I chuckle to myself, as she has never trusted mine.

After a few minutes of rest, the feeling returns to our posteriors, so we mount up and follow PA 36 through Tylersburg and Leeper, where we catch Route 66 through the Alleghany State Park and make our way back to Kane. A stop at one of the area’s many wineries is mandatory, so we follow the signs to Flickerwood Wine Cellars and have a look at its fine selection of berry-flavoured wines. We chat with a fellow biker on a very old Gold Wing before heading across town to our digs at the Kane Manor.

After a farewell meal at the Texas Hot Lunch, the Allegheny ride is in our history book, another check mark on my bucket list of places to ride. The remarkable Allegheny National Forest has a lot to offer, and it’s just a few hours’ ride from my home in southern Ontario.