I get a buzz every time I ride in the Colorado Rockies, and it has nothing to do with the state’s copious cannabis supply. There’s a fantasy-like feeling of plentitude in this mountain range that doesn’t exist anywhere else I’ve ridden in North America. Like a restaurant that only serves your favourite dishes, or a clothing store where everything fits, almost every road you ride in these mountains is unreservedly epic.

Imagine passes that soar over cathedral-like peaks at more than 4,000 metres, endless tangles of asphalt and dirt that connect heart-wrenching vistas and national parks with haunted mining towns and milk-and-honey destinations like Telluride and Aspen. Even if you lived right there in the heart of it, it would be your life’s work to explore all the options.

For me, the best on-pavement ride in Colorado is the 375 km San Juan Skyway, a loop that incorporates the storied Million Dollar Highway, four breathtaking high-altitude passes and four historic Old West towns: Silverton, Durango, Telluride and Ouray, each with its own distinct personality. The Skyway also takes you past the entrance to Mesa Verde National Park, where you can explore Ancestral Puebloan cliff dwellings that look as if they’ve jumped from the pages of National Geographic. 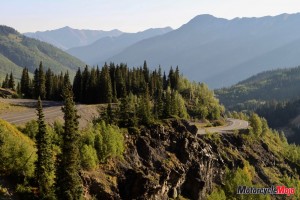 A creature of habit, I tend to revisit familiar roosts during my perennial migration between North America’s motorcycle events and destinations. On the San Juan Skyway, the town of Ouray, aka America’s Little Switzerland, is my usual layover, in particular, the Beaumont Hotel, built in 1886. Although the route begins in Ridgway, I prefer Ouray and Silverton for their boomtown charm and reasonable lodging prices.

To wake up in Ouray on the leading edge of this loop is thrilling, like being a kid on Christmas day. If it’s midsummer, I’ll take off at first light to avoid the crowds, but when it’s spring or fall, I wait out the chill to lessen the potential of black ice on the passes.

No matter your starting point, you’ll want to ride these roads as early in the day as possible, since most summer and fall afternoons can bring thunderstorms and at times heavy rain.

Having ridden the whole loop in both directions, I prefer a clockwise approach, so from Ouray, that means starting out on the Million Dollar Highway as it climbs sharply out of the south end of town.

This section of the Skyway teeters on the edge of steep iron ore cliffs as it slithers its way up toward Red Mountain Pass at 3,358 metres. An engineering marvel, the project was led by Otto Mears, who cut the 40 km roadbed in 1883. Mears was an entrepreneur who saw the need for a passage between the area’s thriving mining camps, and once the road opened, he set up a tollgate and charged a hefty $3.75 per vehicle and 75 cents per horse. There is no consensus on how this 40 km stretch of U.S. 550 got its Million Dollar moniker. Perhaps Mears made – or spent – a fortune, or maybe it’s simply because of the intensely rich experience it provides travellers.

Although the road is completely paved, it feels delightfully treacherous, and those who fear heights will want to avoid peeking off the steep edges.

One Is Silver and the Other Is Gold 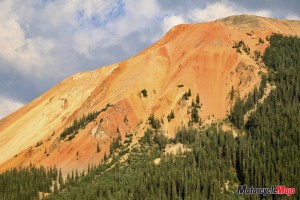 After cresting Red Mountain Pass, the road tumbles swiftly into Silverton, another boomtown reborn, this one with origins in silver mining, as opposed to Ouray’s payload of gold. These highly mineralized San Juan Mountains make up the southern end of the Rocky Mountain range, extending all the way into southwestern New Mexico.

Today, the area’s treasure hunters pilot 4x4s, ATVs, dirt bikes and ADV bikes, chasing the challenging rock-strewn ribbons of dirt that lace together Ouray, Silverton and Telluride. The most famous route is the Alpine Loop, 121 km of rugged and at times technical trail that includes famous Cinnamon Pass, with a summit at 3,853 metres, and Engineer Pass, which crowns at 3,901 metres.

The Indian Roadmaster I was piloting on my most recent lap of the San Juan Skyway was hardly the bike for hard-core roosting, but it was fun to roll that big girl down Silverton’s Main Street and sidle up next to the jeeps, dirt bikes and side-by-sides that line every curb.

The 77 km of U.S. 550 from Silverton to Durango loosely shadow the Animas River, as well as the historic narrow-gauge railway, which has been running continuously between the two cities since 1882. The trip by train takes a little over four hours (nine hours round trip), something rail buffs might relish, but for most of us, it’s far more fun to ride the steep mountain highway in a fraction of that time, untangling its sharp curves until they finally loosen into long sweepers as you glide down into Durango.

Every Road Has Its Thorns 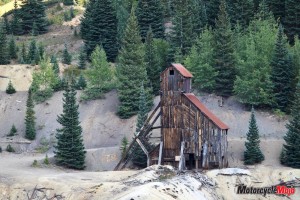 There’s nary a great motorcycle loop that isn’t blemished by at least one corridor of boring brick-and-mortar blandness. On the San Juan Skyway, that comedown is Durango in general, and the section of U.S. 160 west to Cortez. You can cut up on Highway 184 west straight to Dolores and get back into the mountains more quickly, but you’ll miss the entrance to Mesa Verde National Park, and if you haven’t been, it’s totally worth spending some time there.

For nearly 100 years beginning in the late 1100s, the Ancestral Pueblo people built and lived in the elaborate dwellings situated within massive natural alcoves beneath the area’s cliff-side mesas as they farmed corn, squash and beans on the mesas’ fertile crowns, or “green tables,” the literal meaning of mesa verda. For 600 years prior to building in the sheltered recesses, they lived on top of the mesas. Researchers aren’t clear what caused the shift, but it’s certain their topside homes had also been cozy: complex, pit-style dwellings that housed entire communities, also viewable from within the park.
By the early 1300s, these native peoples had moved into modern-day Arizona and New Mexico, leaving their earthen villages abandoned. No one knows exactly why.
You can easily spend an entire day ogling the widespread ruins, so if you have the time, overnight nearby so you can have the park to yourself late in the afternoon or first thing in the morning when it’s cool and less crowded. (Cortez has plenty of clean, vanilla lodgings, including a Hampton Inn and Holiday Inn Express.)

From Cortez, you head north along the Dolores River on U.S. 145. Once you pass the silver-rush town of Rico, the mountains will slowly gather up around you again like massive, grey ocean swells. The San Juan portion of the Rockies features the tallest and most rugged peaks in Colorado, with 13 summits above 4,300 metres. Several pullouts on this stretch of 145 lets you take in a handful of those sentinels in a single scene.

After cresting Lizard Head’s Pass, you’ll descend into the ski haven of Telluride, famous for its swank digs and star sightings. One of its earliest celebrities, Butch Cassidy, robbed his first bank here in 1889. He and his henchmen and horses must have been in pretty good shape to make a fast getaway from a town situated at 2,668 metres.

You can get even higher in Telluride by taking the public gondola to the town of Mountain Village, at 2,909 metres. The first and only free gondola service of its kind, the almost 13 km ride is super-scenic and more than worth the wait in the usually short lineup. Both Telluride and Mountain Village have a profusion of great eateries, without a single chain restaurant among them. As you’d expect, the majority of dining options are chichi, but if you’re looking for everyday fare, there’s great pizza at Brown Dog and some of the best tacos I’ve ever eaten at quick and quirky Taco Del Gnar.

The fastest way to complete the Skyway loop is to take U.S. 145 north to Placerville and continue on to Ridgway on 62 east. But if you’re feeling adventurous, the most satisfying way to close the gap is via Last Dollar Road, a very well-maintained dirt road that climbs through aspen groves and offers views of multiple ranges as it winds over Last Dollar Pass.

This is a beginner/intermediate 4×4 road that can get bumpy at times, and while adventure bikes are ideal for a crossing, they aren’t necessary on a bone-dry summer’s day. I didn’t have the extra time to take the Roadmaster across, though I wouldn’t have hesitated, having previously ridden Last Dollar Road without problem on a fully loaded Gold Wing. I personally find that heavy cruisers and touring bikes, with their torquey engines, low COG and wide tires, are surprisingly manageable on this type of well-groomed dirt road.

At the very least, take Last Dollar Road up beyond the Telluride airport (paved), or as far as you feel comfortable, as an out-and-back bonus. You’ll find the turnoff a little less than 5 km west of Telluride on U.S. 145, just east of the roundabout.

Whether you close the San Juan Skyway loop in Ridgway dusty or clean, there is only one additional challenge: deciding which epic Colorado highway to get high on next.