A change of plans leads to an almost-forgotten highway

It was a sunny Sunday. There were many other motorcyclists passing in the other direction. Friendly waves were visible as they rumbled past me in the cool of the Fraser Valley. There were more and more of them, seemingly hungry to pack in as much riding as possible in the fertile lowlands, as though they didn’t have anywhere else to go. 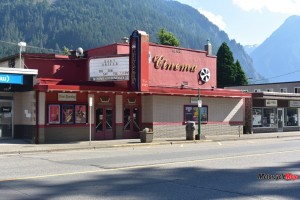 British Columbia had an alarming number of wildfires in the summer of 2017. Many raged near the Cariboo Highway corridor: Highway 97, specifically between Cache Creek and Williams Lake. I had planned a longer ride on this weekend, one that would have had me riding near Quesnel Lake, but there were too many highway closures and evacuation orders. I wished the best for those who had to leave their homes.

Instead, I decided to do some motor-cycle exploring close to home. Highway 7 jumped to mind. This slower-paced and scenic secondary highway is the route I prefer to the speedy straight shot of Hwy 1 when leaving Vancouver and riding east. It would have been the start of my route up to the Cariboo. Whenever I’ve ridden Hwy 7, I’ve seen signs for many interesting towns and historic stops. This was my opportunity to get to know my recently acquired 2010 BMW F650GS and stop in at some of those bypassed places, culminating in the town of Hope: “The Gateway to Holidayland.” 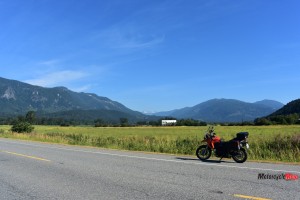 Highway 7 gets really interesting east of Mission. Rolling through massive expanses of farmland, the road twists and turns through small communities such as Hatzic and Dewdney. There was enough open road to enjoy twisting the throttle and getting into fourth gear while taking in fresh, crisp valley air. I geared down quickly to take the sharp left leading across Nicomen Slough and into the small community of Deroche. The bike bounced over railroad tracks in first gear. The tree-lined highway cleared to become a wide open landscape during the crossing of the bridge over the Harrison River. Log booms floated and aging wood pilings stuck out on the vast expanse of water. I smelled fresh-cut lumber. I straightened the bars, focused on the road ahead and looked forward to my first stop.

Stepping Back in Time

I took a right to navigate some cracked and narrow roads bordered by cornfields to Kilby Historic Site. A barn wall provided a welcome bit of shade for the GS and me as I removed and stored my riding gear. I sauntered into the orientation barn, an aging wooden one-story building that once served as a horse shed. Staff in period costume served me lunch on red-and-white checked tablecloths as the tinny sound of 1920s radio played from speakers above. I was being steeped in Fraser Valley life from a century ago. Kilby Historic Site is a place where the Fraser and Harrison Rivers converged and where a CPR station brought many travellers to Harrison Mills. 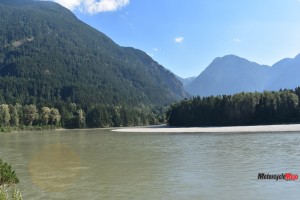 Boardwalks and ramps led me to the T. Kilby Hotel and General Store. Inside, Ernie, an interpreter dressed in 1920s garb, standing next to a gleaming antique cash register and in front of shelving filled with century-old tin packaging, told me of the horrible flooding the area has experienced over the last century. Boardwalks connected the community.

My GS crunched along the parking lot gravel as I pushed on. The warmer afternoon made putting on my riding gear more uncomfortable, but I opened up all flaps and knew I’d soon cool off as I rode toward the Cascade Mountains and my next destination. I was enjoying the smooth ride of the BMW’s parallel-twin engine, getting to know the capabilities of the Brembo brakes. I was also getting a feel for the rpm-ranges of the individual gears as well as cycling through the digital gauges when at a stop.

Back on Hwy 7, fruit stands, sometimes nothing more than produce being sold out of the back of a truck, would appear. There was an abandoned gas station, an indication of how increased dependence on Hwy 1 has reduced demand for services through this secondary road. There were a few roadside diners, RV parks and smaller motels, signs of a fading culture based on life on the road.

A swift climb and wiggly descent by the Fraser River had me monitoring my speed before a straight stretch along vast fields of corn brought me to the town of Agassiz at the junction with Hwy 9. Taking a left got me to a straight stretch of road that followed the left bank of the mighty Fraser.

As the Cascade Mountains loomed in front of me, I geared down, angled the bars to the left and took a wide 180-degree turn before stopping at the junction with Hwy 1. A left turn brought me to an incredible sight, one that had me struggling to keep my eyes on the road. The bridge over the wide Fraser had me slowing down to appreciate its splendour. British Columbia’s largest river’s raw, slow power pulsed beneath the bridge I rode across, a fitting end to a glorious afternoon’s ride. On the other side I was greeted by a selection of characterful motels.

I made a booking in central Hope, allowing for what I hoped would be interesting exploration of the town on foot. As I took a left onto Wallace Street, several cruisers passed me the other way. I spotted RVs, jeeps, and vans loaded with camping gear. Lining Wallace Street were several carved wooden sculptures, a nod to the town’s rustic beginnings. I geared down and brought the GS to a halt at my accommodation for the night.

A quick wander through town had me noting how many motorcyclists were travelling through. This was something I remembered from my childhood visits to Hope, when my parents would bring me here for a meal or an overnight stay before we pressed on to our campsite destinations in the Okanagan or the Kootenays.

A short walk down to the Fraser brought me to the Fort Hope National Historic Site, recognized by a simple cairn overlooking the Fraser River. It reminded me of how the town really got started. It began as Fort Hope in 1849, a Hudson’s Bay Company outpost that took in supplies heading upriver from Fort Langley. Things really kicked off in 1858, when the gold rush brought in hundreds of prospectors keen to get to the Cariboo gold fields. Roads were built from this gateway town to get to the gold. Hope was, even then, a junction for travellers looking for adventure and seeking their fortunes. I looked beyond into the setting sun, the quiet power of the Fraser’s blue-green flowing waters lulling me into a peaceful state.

While chasing my shadow back to Harrison Mills and beyond, before reluctantly joining the traffic leading to Vancouver, I thought how fortunate I was to have had the opportunity to explore Hwy 7. Wildfires may have closed one door, but another one opened, giving me the chance to get to know both the roads closer to home and my BMW F650GS.