This adventurous Brit has melded his love of seeing the world and off-road riding with some of the world’s toughest motorcycle competitions.

Lyndon Poskitt is one of those unique individuals who marches to the beat of his own drum. At 39 years old, he recently completed his third Dakar Rally, which is one of, if not the most, arduous off-road motorsports competitions on the planet. The 2018 edition marked the 40 anniversary of the race and is widely considered as being the toughest Dakar Rally ever. Finishing this is a victory in its own right, but competing in the Original class – which is the unsupported class that mandates the riders must work on and maintain their bikes by themselves without the aid of outside support – is considered the most respected way of competing in the Dakar. The feat has been likened to climbing Mount Everest without oxygen.

I first met Poskitt in August of 2014 at the Rally Mongolia a few months into his new career as a video-making, professional off-road motorcycle racer after he spent the previous 17 years as an aerospace engineer. He had just ridden across central Europe and Asia on his modified KTM 690 to the start of the rally and quickly prepared the same bike for competition. From that moment forward, there was no doubt in my mind just how special and charismatic this Yorkshireman was. He was on his way around the world on the mother of all motorcycle trips on his bike that he calls “Basil,” barely loaded with only the essentials for survival, and he was doing the trip off-road whenever possible! Poskitt documented his trip by shooting video footage and then sending the SD cards back to the U.K. to be edited and uploaded by his sponsor Adventure Spec. His video series called Races to Places has blossomed into having a vast YouTube audience.

Poskitt is an accomplished motorcycle rider who began at an early age riding trials. His father, Robin, played a large part in his upbringing and is the perfect role model. They have an extensive machine shop at their home; the elder specializes in restoring vintage cars and building classic rally cars. 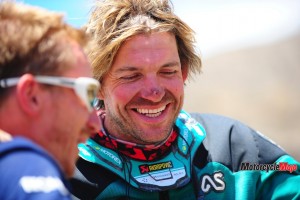 I recently asked Poskitt what motivated him to give up his career as an engineer and pursue such a free-spirited path. He answered without hesitation, “I was competing in a marathon in 2013 and had a life-changing experience. At the time, my job was going great – I had money, toys and nice cars. I had worked my way up the corporate ladder into management but I wasn’t truly happy. During the marathon, I became severely dehydrated. I nearly died. I spent nine days in hospital recovering and watching a number of videos about people riding around the world. From then on I decided to change my life and start living.”

In December 2013, he gave his employers notice and he departed for the horizon in April 2014. His first stop was the Hellas Rally in Greece. Poskitt then made his way to Rally Mongolia, which started in the capital city of Ulaanbaatar. After that rally, he continued his voyage down through Asia to Australia and raced the Finke Desert race before heading over to New Zealand. Once satisfied with his exploration of New Zealand, he headed to North America and then through Central and South America, ultimately riding to the start of the 2017 Dakar Rally, where he parked Basil temporarily and jumped on his new steed Rex, a KTM 450RR. Poskitt had secured sponsorship from Motorex Oils for the 2017 Dakar, as the company was celebrating its 100 anniversary and loved his story.

Poskitt completed the rally, but not without hardship. He admits he was not well prepared and became increasingly worn down, enduring some difficult moments. But with an excellent second place finish in the Original class that year, he set his sights on another attempt at the class win for 2018. His YouTube movie Malle Moto – The Forgotten Dakar Story received numerous accolades, such as “incredible,” “inspirational” and “illuminating.”

Building a Fan Base 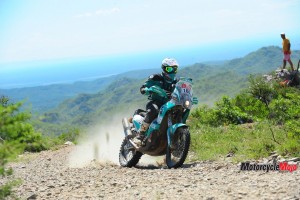 This time around, his plan was to produce daily videos of his Dakar effort – that in itself is an extensive undertaking. Not only was it very expensive, but also very time- and energy-consuming. Poskitt turned to social media to fund the video series via Kickstarter, and the plan was a resounding success. More than 600 donations were made to fund his Dakar video series. I asked him what he felt was the most satisfying part of this year’s Dakar – the finish, the result or the video series. He responded decisively, “Without a doubt, the videos were the most rewarding part of the Dakar this year. It was extremely tough competing and producing videos; it was by far the most difficult endeavour I have ever undertaken. I felt I had to produce good videos because so many people were counting on me. I think I put as much pressure on myself as the factory riders do to win.” The video series enjoyed a massive number of viewers, with more than 20 million viewed minutes and upwards of three million unique views watching an average of six minutes of video per view.

His fan base is worldwide and growing, as seen in the 20-episode Dakar series that shows numerous spectators holding up handmade signs with #100 (his race number), #lyndon or #rex. He tried to interact with his many fans as often as time allowed and he often stopped to shake hands during the liaison stages at impromptu meet-and-greets.

The media side of his Dakar took an hour per day every day working with videographer Dario discussing timelines or edits. That was an hour Poskitt could have – and should have – been sleeping or resting. I asked him if he felt the video work played a part in his result. “The media work didn’t really play into the results, but it’s very hard to quantify. I always had the cameras running. I could have used the extra rest, but I don’t think I would have been any faster during the rally.”

The Toughest Rally to Date 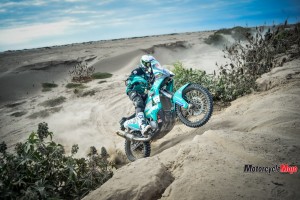 Letting his supporters down was out of the question, even though just prior to the start of the rally he had been bedridden with a chest infection that had him worried. “It was a worst-case scenario,” Poskitt said. “I was really sick and worried about disappointing everyone. Fortunately, once the race was underway I felt better and was riding well. I hadn’t spent much time on the bike, and preparing is one of the most difficult parts of the entire project. I didn’t race all year, but during the first few days, the massive dunes in Peru didn’t seem to give me too many problems.”

This year’s Dakar Rally was one of the most difficult ever according to most knowledgble insiders. I asked Poskitt why this year was so difficult, and his response was surprising: “I did the Dakar in 2013, and after that my thoughts were that any experienced adventure rider could do this rally. This year there is no way that would happen; you needed to be super-fit, technically a great rider and have an unbelievably strong mind.”

It’s not surprising he feels that way, given how he described part of his experience. “The open-country sections were relentless, riding for hours through and over camel grass, dunes and riverbeds, mud, rocks, and we came out to a gravel road thinking I can rest. Half a kilometre later, we were back off-road for another few hours,” he said, noting that he felt pretty good during the first week, but the second week was just as brutal – some days he was in tears. There was not once he was flat out in top gear cruising along. The rumour was that the Dakar had become too easy, so the ASO organizers enlisted a new team to lay out the course. It was very difficult, but there were ASO support trucks everywhere with water and medical support.

So, what’s in store for the affable Brit now that the dust has settled from this year’s Dakar? He replied with confidence, “I am very satisfied knowing I completed this very difficult rally. I’m at home in the U.K. now catching up on work. The Lyndon Poskitt Racing website has gone crazy since the Dakar; we sell rally necessities ranging from complete engines and bikes to parts needed to build rally bikes.”

Poskitt will be heading to Capetown, South Africa, to meet up with his bike Basil to complete the Races to Places journey. He’ll spend this year riding up the east coast of Africa, through countries such as Kenya, to the start of the Africa Eco Race and finish up in Dakar, Senegal, completing an International Cross Country race on every continent.

I was curious about his crew that accompanied him to this year’s Dakar; I wanted to know the story about Uncle Rick (not his real uncle) and Dario, and how they became involved in the Dakar effort. “The video production side was very time-consuming; we didn’t have a video editor two weeks before leaving after a deal fell apart. I interviewed Dario for the job. It turned out very well, but it cost much more than planned. The end result is a really good video series that documents my entire Dakar experience accurately and in an entertaining fashion.” Poskitt explained that Uncle Rick is one of his previous sponsors (Attwater Group), and that “now we are good mates. I asked him to come along and drive the media vehicle to carry Dario from bivouac to bivouac. All things considered, I’d say for this Dakar: everything went nearly perfect.”

Poskitt finished second to former factory Yamaha rider Olivier Pain in this year’s Original class and 33rd overall. I asked him about his feelings relating to the actual results. “I am super-happy with the result,” he said. “The Original class is a very different experience than having a team that works on your bike and takes care of all of the details. Finishing thirty-third in the toughest-ever Dakar is really something special, and I’m happy to be on the podium in the Original class.”

What Does His Future Hold?

Other than his 2018 plans to ride the length of the African continent, Poskitt has numerous projects and ideas in mind, including the opportunity to go racing on four wheels.

I asked him if we would see him in Canada or Japan this year (we both rode the Hidaka Two Day Enduro [HTDE] in 2016 and he has been a special guest twice at the Overland Adventure Rally held each July in Ontario). His response was, “The largest contributor to the Kickstarter fund was a Canadian. To show my appreciation, I would like to visit him and shake his hand, as well as participate in the Overland Adventure Rally in July. I would very much like to return to the HTDE in Japan as well and do a proper video with Dario.”