Three friends and three bikes in the rugged remoteness of Alaska. Could it get any better?

Imagine you had three dream bikes in Alaska with your two best friends for 10 days. That was basically a dream of mine for years – and recently, it came true.

Never being to this part of the world before, I pictured baron lands; sharp, rocky mountains; a minimal number of people; small towns; and a very desolate, remote feeling. Well, that’s pretty much exactly what I got.

Alaska is no joke. There is so much open land, as high-population city dwellers, it really is hard to wrap your mind around. This isn’t a controlled National Park. This isn’t a place where someone can find you if you scream really loud. This isn’t a forested area where you can get back on the path – there is no path.

We made our own paths. 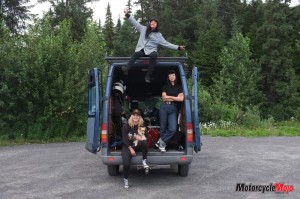 The Wild Ones crew are no strangers to adventure. We three women travel together in places none of us have ever been, we take risks and we bring our motorcycles along. This wasn’t our first rodeo, but crossing that border into Alaska didn’t make us feel as though we were ready for this type of remoteness. We really were in the middle of nowhere. What we are used to is being outside our comfort zones.

We arrived at our first location, wide-eyed and ready to explore.

Hatcher Pass: If you’ve been, you know the feeling. It’s something you can never quite get across through words or photos. We were in the sky, above the rest of North America. It was the greenest greens contrasted below the bluest sky-blues. We were among monstrous mountains; we were so small. Our new home right in the middle of it all: a tiny cabin barely standing, with three motorcycles parked outside ready to be ridden wherever we pleased for the next 10 days. 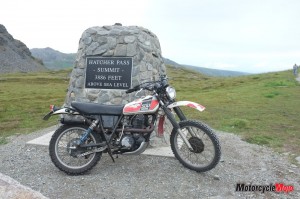 My 1976 Yamaha XT 500 was used to the altitude of mountain passes. It was used to being in places it has never been before; it was also used to being outside its comfort zone and it was used to me, its owner and biggest fan. The old Yammy was my partner in crime, and I think it was just as excited to be in Alaska as I was.

Standing up on the pegs of my old friend riding up the dirt road toward the highest elevation in the area was an amazing feeling. The crisp air felt weird in the dead of July. Over and over in my head I said, I’m riding my XT in Alaska. A dream come true, to say the least.

The paths seemed to go forever, the wrong turn seemed so much more dangerous than it usually did, and every once in a while I’d catch a glimpse of a bear, a fox or a marmot. The freedom was massive. Becky, this is more freedom than you’ve ever had in your life was my thought as I raced around the backside of Hatcher Pass, more alone than I have ever been.

We spent those 10 days exploring as much of of Alaska as we could. We had motorcycles at our fingertips, no plans, and were ready to get lost. It was bucket-list material.

Land of the Midnight Sun 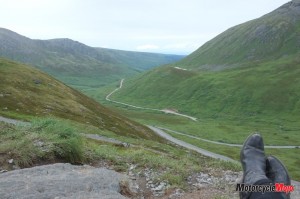 Lanakila MacNaughton is the planner, the mom. We follow her lead across states and countries all over the world. On the Alaska trip, Lana drove the Sprinter chase van to Anchorage all the way from Portland, and got Adri and me gas when we ran out.

Adri Law is my best friend. In the past year, we rode across Europe together, lived together, tattooed our names on each other, and rode through Mexico, Washington State, Oregon and Canada together. We are like sisters, and now we were side by side riding through Alaska. We were Lost Boys in our dreamy Never-Never Land.

This far north, the sun doesn’t set in the middle of summer, so we rode into the “night” without even realizing. The glaciers that towered over the roads leered down on us as if watching us, since there wasn’t anyone else around for them to watch. So often we stopped to take a photo or just take off our helmets to listen. The quiet of the North is something that is familiar to me. I feel so at home and at peace when all you can hear are birds and the wind. “True Alaskan Girls” is what we joked we were when we’d conquer menial trip tasks at hand, but truly, I think we felt as if we could stay here forever and just live off the land – never to return back to our homes in Vancouver, Portland or Los Angeles.

You can off-road basically everywhere.

You can ride on the beaches.

There are no helmet laws.

We didn’t see one cop.

The state is your playground, and you better not die before going.

Here’s an example: Imagine an empty beach, flat and wide, rocky but smooth and totally deserted – not a vehicle or person in sight. That’s what we discovered on our way to Homer. It felt as though my XT had a mind of its own and just took off into the misty, salty air. I flew through a group of seagulls trying to enjoy their lunch of washed-up seal. I didn’t realize how many birds there actually were until I was in the middle of the flock, with loud squawking happening all around my head and gulls bumping into each other mid-air trying to escape my recklessness. They weren’t used to this type of animal, and I truly felt like one, part of nature and right in my natural habitat.

I highly recommend Alaska to anyone who rides a motorcycle. Whether it’s on a dirt bike or a street bike, there is something for everyone up there. The roads are long, open and free; the backcountry is massive, technical and so very available. Even with 10 days in Alaska, I feel as though we didn’t quite scrape the surface, so give yourself some time, be prepared for the elements, bring gas and don’t count on having cellphone service. The best part about Alaska is its roads, rivers and lakes, but even in the dead of summer, it’s not warm. Don’t bring a bikini. Oh, and watch for grizzlies.