We might have seen a twin-cylinder, two-stroke 500 cc race replica from Harley-Davidson on the roads of North America if the timing had been a little different

As a home-run two-wheeled Trivial Pursuit question, it has few equals: Over 40 years ago, in 1975, Harley-Davidson competed in the 500 cc World Championship against Suzuki and Yamaha with a race-winning two-stroke Grand Prix racer of its own design – true or false? Sorry to disillusion the Hog faithful, but however unlikely, it happens to be true!

Okay, not exactly a full season of GP competition, more just a handful of races on the world stage, including one for Harley-Davidson’s factory rider Gary Scott, who retired his RR500 from the Austrian GP held at the Salzburgring in early May that year with engine problems. But by then, the same such bike had already finished seventh in the season-opening French GP at Paul Ricard in the hands of Michel Rougerie, in a race won by Giacomo Agostini, making his two-stroke GP debut on a Yamaha after his shock switch from MV Agusta.

Rougerie also scored two non-title international victories in France on the RR500, and his 250/350 GP factory teammate and Harley’s reigning 250 cc world champion, Walter Villa, had given Phil Read’s four-cylinder MV Agusta a serious wake-up call in early Italian championship rounds with the same bike. Yet later that same year, the twin-cylinder four-carb H-D RR500 project died away almost as mysteriously as it had been born, leaving Harley’s Italian factory where the bike had been created to focus on retaining its 250 cc world crown with Villa that year, going on to make it a hat-trick of titles in 1976, as well as doubling up by winning the 350 cc crown that year, too. 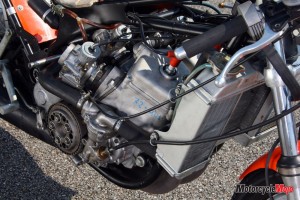 Those achievements were the work of the close-knit band of just four men who made up the Harley-Davidson road-racing team working out of its Italian subsidiary’s lakeside factory at Varese, which formerly housed the Aermacchi flying boats. Postwar, Aermacchi became a motorcycle manufacturer to compete with dozens of other companies in catering to the need for personal transportation in war-ravaged Italy – so successfully that in 1960, Harley-Davidson purchased 50 per cent of the company as a source for lightweight motorcycles to be sold in America alongside its Milwaukee-made V-twins, acquiring the remaining half in 1974. But just four years later, in 1978, it sold its Italian subsidiary to the Castiglioni brothers, who renamed it Cagiva – only in due course, in 1998, to rebaptize it as MV Agusta, which it remains today.

Throughout the 1960s, Aermacchi H-D had successfully gone road racing with its air-cooled horizontal-cylinder OHV singles, sold in the Unitied States as a Harley-Davidson Sprint. But in 1971, the Varese-based factory began developing a two-stroke 250 cc twin, after its prodigal son Renzo Pasolini had rejoined Aermacchi from Benelli to race it. In 1972, Pasolini lost the World Championship by a single point to Yamaha-mounted Jarno Saarinen – only for fate to decree that they should both lose their lives in the terrible crash in the 250 cc Italian GP at Monza the following May. Pasolini’s vacant seat in the squad – by now rebaptized as a full Harley-Davidson team – was taken by the up-and-coming Gianfranco Bonera, and as Albino Fabris, one of the four men, together with Ezio Mascheroni, Claudio Lazzati and ex-racer Gilberto Milani, who made up the Harley GP team’s engineering crew, recalls, it was thanks to Bonera that the RR500 project came about.

“We’d made a 350 cc version of the 250 twin, which by now was liquid-cooled,” Fabris says. “We also built a 385 cc version of that, and in the final round of the 1973 500 cc Italian Championship at Misano, Bonera gave Phil Read on the four-cylinder MV Agusta a lot of trouble throughout the race, and only narrowly finished second to him, ahead of all the other true 500s, after setting the fastest lap. Well, that set us all thinking about what might be possible with a purpose-built full 500, and since Walter Villa, who had by then also started to ride for us, didn’t like the 385 and wanted to race a full 500 cc bike, we decided to ask our management to let us build one.”

The answer from Harley’s Italian subsidiary’s management was a positive one – but with certain conditions. Though its Italian spinoff was doing okay, the U.S. parent company, then controlled by AMF, was suffering a slide in sales owing to quality issues and increased Japanese competition, so there was a strictly limited budget to develop the bike, and it would have to be offset by making a customer version available. A minimum of 25 examples of this had to be built in order to homologate it for AMA competition. Otherwise, go ahead, guys – see what you can do!

As always in Italy, passion overcame whatever restrictions might have been thought to be imposed, and during the spring of 1974, engine designer Egisto Cataldi – already the creator of the 250/350 cc parallel-twins that would shortly gather up a total of four World titles – worked after hours at home to design the RR500 engine from a clean sheet, with only the gearbox casing and some minor details carried over from the smaller engines. 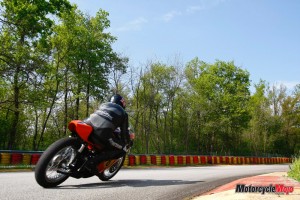 Like the smaller powerplants, the new Harley RR500 was also a liquid-cooled parallel-twin with a 180-degree crank, and its six transfer/dual intake/single exhaust port cylinders that were canted forward 15 degrees from vertical measured 72 x 60 mm for a capacity of 488 cc.

Unlike its piston-port predecessors, the new Biancone (as in “Big White,” referring to the fact that the factory bike raced in a plain white fairing for a couple of its early races) had a reed-valve engine, in an attempt to soften the power delivery and make the bike more tractable on tighter tracks. However, the problem was that there wasn’t yet a reed valve pack big enough for the bike’s requirements – nobody made them at all in Italy, so they couldn’t even persuade someone local to make them a special design.

The only solution was to use a pair of Yamaha reed valves on each cylinder sourced from the newly launched four-cylinder TZ750, so that meant doubling up on carburetors, too, with two 34 mm Dell’Ortos mounted to each cylinder with the reed blocks splayed apart at an angle for clearance. These were later replaced on the single factory racebike by 34 mm Mikunis, while the total of 18 RR500 engines built (not 25, whatever they told the AMA!) resulted in 16 complete motorcycles being sold to customers that winter for 3,500,000 lire, all of which retained the Dell’Ortos.

Ignition was provided by a self-generating Dansi CDI mounted on the left end of the crank with just 21 degrees of advance, and the 89 hp delivered to the rear wheel at 10,000 rpm (with maximum torque of 50 ft-lb at just 6,800 rpm – quite a two-stroke tractor!) was transmitted via an extractable cassette-type six-speed gearbox with different standard ratios from the 250/350, matched to a 16-plate Surflex dry clutch positioned on the left behind the generator.

This muscular-looking motor was mounted in a chrome-moly, tubular-steel duplex frame very similar to that of the smaller bikes, but subtly reinforced, with a 55 mm longer swingarm delivering a 1,410 mm wheelbase. This contained the eccentric chain adjuster in the axle mount, as opposed to in the swingarm pivot on the smaller-engined bikes. The RR500’s 35 mm Ceriani fork was set at a rangy 28 degrees rake with just 85 mm of trail, but after starting out with twin Ceriani shocks at the rear, the team soon adopted Girlings. Up front on all the customer bikes, a pair of 280 mm Brembo cast-iron ventilated discs was gripped by twin-piston Brembo Serie d’Oro gold calipers, with a 200 mm Ceriani single leading-shoe drum brake at the rear. Borrani 18-inch alloy rims were employed at both ends – a WM2 front and WM3 rear.

On the works racer, however, the team initially experimented up front with the unique and much more costly 260 mm Campagnolo so-called hydro-conical cast-alloy wheel, with a hydraulically operated conical drum brake contained inside the hub; and as Villa was a fan of this (he used it extensively on his 250 World Champion bikes), they experimented with it for some time before reverting to more conventional twin discs for 1976, after Villa stopped riding the RR500. 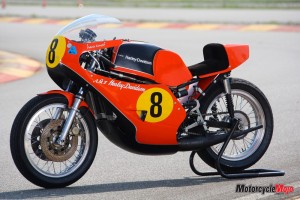 However, the rear disc brake setup on the factory bike was a different matter, and was retained throughout its career, having been invented by the team and patented by Harley. “We wanted to prevent rear-wheel hop under hard braking, which was inevitable with the inertia forces caused by such big cylinders, and gave the chain a hard time,” Fabris says. “The rear brake assembly weighed four kilos, so moving it to the centre of the bike and attaching it to the gearbox output shaft not only reduced unsprung weight and thus improved suspension compliance, it also compacted the mass more centrally, and made the bike steer better.”

The 170 mm disc was gripped by a single-piston caliper, and was cooled via a duct in the side of the fairing. With this installed, the factory racer scaled in at 124 kg with oil and coolant but no fuel, split 53/47 per cent forward, as against the 130 kg weight of the customer bikes, split 51/49 per cent. Wonder why Harley hasn’t made more use of this patent since then – for example, on its VR1000 Superbike? Or did it maybe forget it ever had it?

Victories for the RR500

After developing the RR500 in track testing during the second half of 1974 – in between defeating Yamaha to win Harley-Davidson’s first-ever World Championship of any kind in the 250 GP class – the RR500 model’s racing debut actually came about on March 16, 1975, in two different countries.