Even at a standstill, Kawasaki’s new supercharged Ninjas, the H2 SX and especially its sparkly green sibling, the SX SE (Special Edition), draw lively opinions. Some love the strapping Transformer-like styling, while others call it busy. One old man watching me fuel the SE way out in the Mojave Desert said it looked otherworldly, “like something an alien might bring down to race around on.” I told him the power the H2 makes is what’s really out of this world, some 200 ponies whipped up by a state-of-the-art supercharger. He just laughed and pedalled his bicycle away. He probably thought I was kidding.

But the new H2 SX and SE versions are no joke, although it is a bit funny that on Kawasaki’s website you’ll find these two bikes residing under the tab “street/touring” instead of the tab listing the company’s “supersport” machines.

The Softer Side of Searing 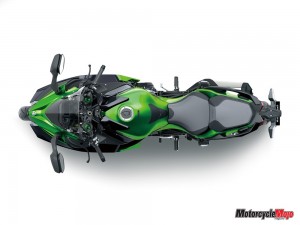 The green Special Edition version provides even more functionality with a laundry list of goodies, including Kawasaki’s Quick Shifter for clutchless gear actuation up and down; cool, new LED cornering lights activated by lean angle; an easy-to-read TFT display; larger windscreen; steel braided brake lines; heated grips; a centrestand; and lastly – and rather amusingly – Kawasaki’s Launch Control Mode, for those days you don’t (or do) feel like doing wheelies from every stoplight.

It was the SE version I had nabbed from Kawasaki’s U.S. Headquarters in Southern California late one afternoon to head straight toward the high desert for four days of real-world riding. 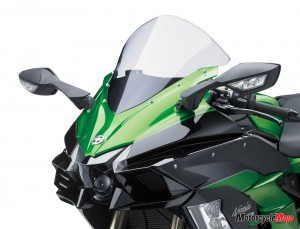 My tour began with a stint of lane-splitting down one of California’s vast 12-lane freeways, where just getting to the proper splitting lane (in this case, between the HOV and fast lane) is a journey. Splitting lanes in stop-and-go traffic is a great way to test a bike’s low-speed handling characteristics.

With a claimed wet weight of 260 kg, the Ninja SE is not light by anyone’s definition. At parking lot speeds, it’s a bit of a fish out of water, at least while you learn how to be an active dance partner to its sensitive, speed-loving chassis. Luckily, the bike’s wasp-like waist allows a rider to integrate easily, quickly becoming an influencing component in the balancing act.

The 45 minutes spent teasing out a line between lanes of jostling cars and trucks also showed just how well mannered this ferocious beast can be even before your throttle hand is fine-tuned to the supercharger’s rapture. That said, I did take a few minutes to flick through the adjustable rider-assist elements that fill the large TFT display. I chose a Power Mode of “Medium” (75% juice), the KTRC traction control at its Mode 2 (of 3) setting and engine braking tuned to “Light” for smoother declaration. I would eventually default to these settings as an ideal middle ground for almost all real-world situations.

Once off the crowded freeway, I was able to relax and settle into the H2 SE properly, swinging the big sport-tourer east toward the mountains and infamous Ortega Highway, one of SoCal’s illicit proving grounds, drawing conga lines of newbie squids and veteran knee-draggers alike. 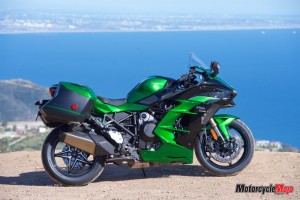 Lucky for me it was late in the day during the middle of the week, so the Ortega was reasonably clear of traffic except for a paving crew that had just finished rolling out new black carpet. It was immediately apparent the H2 SE is right at home in these fast, sweeping corners. Power engagement is very linear, especially in the Medium setting, coming on via a strong, even wave that crests around 6,500 rpm as the supercharger announces its arrival with a breathtaking surge of energy that delivers you very quickly to a soft rev-limiter at 12,000 rpm. It’s the kind of power that makes you want to throw back your head and cackle.

Fast cornering, particularly as the road tightened into more of a dense tangle, was fairly intimidating during this orientation period, but I was quick to remember the bike is equipped with wildly sophisticated electronic corner management functionality harvested from the company’s experience in World Superbike. This system measures real-time chassis orientation while monitoring the rider’s movement and inputs in order to adjust traction control and braking during cornering for optimum stability.

I can’t say that I ever came close to pushing the H2 SE’s limits during my four-day stint charging around California’s high desert, but I can say that I pushed my own limits of comfort as a rider and felt very satisfied with the bike’s consistently predictable outcomes. My first thought about having such a powerful monster loose on the streets was that it will be too easy for people to get in over their heads. While the H2 is a force to be approached with great caution, it has a host of built-in checks and balances that police human folly.

Into the Great Wide Open

The Ortega is only one section of the 179 km-long Highway 74, which connects several high mountain passes between San Juan Capistrano and the desolate Palm Desert, where I would spend the bulk of my four-day tour. Unfortunately, the broad, flat valleys that separate the high mountain ranges are densely populated and simply torture when you’re riding a bike like the Ninja H2. You know how you cringe when you see that guy driving a Lamborghini around the city? Riding the H2 on surface streets feels quite a bit like that: inappropriate, like asking a racehorse to pull a wagon.

The big superbike’s brakes are plenty to bring the hurling works to a quick halt. The dual front discs are especially instructive, and I liked to use them in concert with the less-impactful single rear in almost all situations.

It was on these surface streets that I began to notice the first hints of physical effect that would manifest over the long days of riding to come. My bum in particular was a quick judge of the sit-bones crunching seat, a first-change item if I were to own this bike for its touring-intended purpose. The ergonomics, while spacious for a supersport, were fairly cramped for long days spent static in the saddle, causing me to spring up on the pegs with a groan every so often.
But overall, exploring the great wide open on the H2 SE was surprisingly chill. Hand placement is not so low that undue weight is placed on the wrists, and the windscreen is just high enough for wind to travel easily over the top of my helmet, offering just enough protection without much buffeting. The TFT screen on the SE is quite easy to read, and all the controls/adjustments were easy to use. My favourite and most oft-used feature while touring turned out to be the cruise control. I’m not sure I would have as many good things to say if it weren’t for these short disconnects.

The stylish saddlebags were also a major benefit. A cinch to remove and replace, they offered a surprising amount of packing space – plenty of room for four days’ worth of sundries between the two saddlebags and my backpack.

As for chassis feedback, the H2 SX’s fully dialable suspension is exceptionally accommodating no matter the road surface. Unusually intense winter rains had pocked most of the desert highways I explored, but nothing seemed to faze the big Ninja.

Coming out of the desert after four days of flying low on the H2 SX SE was bittersweet. I wasn’t ever completely comfortable, but I was happy and also never bored.

There is a certain sense of vitality that goes along with piloting such a virile machine. A kind of core-clinching fortitude that makes you feel that much more alive. While there are several other sport-touring machines that are miles more comfortable and worth considering – including Honda’s wholly transformed, now super-athletic Gold Wing – there are few bikes that will make you grow virtual chest hair the way the H2 SX and SX SE will.

But commanding that much hulking, musky power has to be high on your priority list. I don’t see someone hoping for a well-rounded sport-touring experience being happy with something this aggressive. The H2 SX or SX SE will be a statement bike for someone who wants a very specialized experience, and they are also quite expensive compared to other sport-tourers one might consider: $21,899 for the black-only SX and $25,299 for the feature-rich SE.

Is there really room for a class of hypersport tourers like the H2 SX and SX SE? Heck yeah. There will always be riders who want the fastest, the most sophisticated, the most badass.

And some will be riders like me, people willing to trade comfort and a wad of cash for the thrill of being able to tour around on the back of such a bristling beast.

Why ride when you can fly?