Some fantastic memories were made in a simpler time of motorcycling

I thought that a “blast from the past” might hold some interest for Motorcycle Mojo’s older readers, especially those with a love for older motorcycles. I was born in South Africa and started riding at the age of 16, when my dad gave me his 1955 350 cc BSA B31, which he bought brand new; it was my pride and joy for several years.

I lived in Cape Town and soon made friends with several others who also had a love of motorcycles, and it wasn’t long before we started going for rides together on the weekends. Cape Town and the environs have some of the most spectacular scenery in the world, and offer the opportunity to go for rides along the coastal road that runs right around the peninsula encompassing both the Atlantic and Indian Oceans. A ride like this would take the whole day, starting at our meeting point in the centre of Cape Town.

We had some interesting bikes in our group but not all of us rode together at the same time – whoever was free at the time of a ride usually joined the group.

The BSA Clubmans racer used to run on Castrol R oil, which was a castor-based oil that was extensively used in those days by most of the racing motorcycles. When an engine ran on this, the aroma of the Castrol R exhaust fumes was something fantastic, and we always used to ride behind it to enjoy this lovely smell. 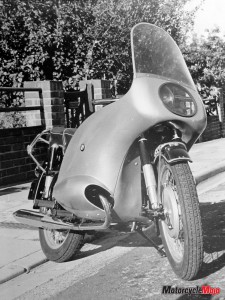 Once a month, we would organize a ride that started from the centre of Cape Town (Greenmarket Square) and continued along the National Road to Somerset West, a ride that took about 45 minutes, depending on the speed. Some of our riders were crazy and used to consider this a race, and it became a spectacle that was watched by many Capetonians, including the police, as the bikes flashed by on the long stretches of road with some of the riders lying flat on the tank! When I think about it now, I realize that some of us young folks must have had a guardian angel watching over us.

Weekend rides were many and varied, depending on the time of the year and the weather. One memorable ride took us inland on a very hot summer’s day. We were riding in shorts, which was not very clever, but in those carefree days we didn’t even consider the consequences should we fall off, and just rode in blissful ignorance.

One ride took us into a semi-desert region called the Karoo. It was very hot, and by lunchtime we were hungry, too, so we stopped alongside a windmill that was close to the road. Windmills were used for pumping underground water into a small dam alongside the windmill, and from which animals drank. We all stripped off and jumped in for a lovely cooling swim. Sandwiches and a cup of coffee at the side of the road refreshed us for the trip home.

Cape Town enjoys a Mediterranean climate, which for us North Americans is easy to handle, with lovely warm summer days with temperatures reaching 30 C and above. The winters, which are usually mid-year from March to September, tend to be cooler, but never colder than 0 C. In Cape Town, the rain comes in winter, and depending on where you are, it can sometimes be like a deluge, so there are not many motorcyclists who venture out, except those who use a bike for going to work.

After I started work doing an engineering apprenticeship, I was earning enough to pay off a new bike, and my dad signed the papers for me to buy a brand-new BMW R50. This was a milestone in my life and something that I will always remember with great happiness. As it was my sole form of transport for both summer and winter, I needed to find a way to improve weather protection during the rainy months. A friend of mine and I found a company on the Isle of Man called Peel Fairings, which made beautiful dolphin-type fairings for BMWs. We wrote to them and ordered two fairings for our bikes. This was a wonderful addition to what was to my mind the most beautiful motorcycle in the world. This fairing not only kept me totally dry in the winter as long as I kept moving, but also added some top speed when carrying a passenger.

Road racing was very popular, and a track called Killarney was built in Cape Town for this purpose. The most popular bikes were the Manx Nortons and AJS 7Rs, with an occasional G50 Matchless, BSA Gold Star or KTT Velocette. We were fortunate in later years to get a chance to watch Geoff Duke on his Gilera, and the thrill of the sound of that magnificent Italian four will stay with me forever, as will his wonderfully smooth handling of his machine.

As what happens to many of us who ride motorcycles, the time came to get married and have children, and my motorcycle days ended until I was in my 50s, at which point I again indulged myself and bought a 1975 BMW R75/6. I rode this until last year, when at the age of 78, I felt that I had pushed my luck long enough and decided to sell my bike. It was not a difficult decision to make; maybe the years bring sense to a person at the right time. I reasoned that in all my riding years, I had never had an accident or even fallen off my bike, and that the smart thing to do would be to call it quits while I was still in one piece.
One needs to know when enough is enough, and it’s lovely to be able to look back and have all those amazing memories.