If you find sport bikes uncomfortable but still want the thrill of speed and acceleration, this just might be the bike for you

But supersport machines are temperamental, highly focused machines that sacrifice comfort and utility on the road in their relentless pursuit of track-day lap times. The S tagged onto the Super Adventure’s name signifies that it’s the road-oriented version of the Super Adventure R, which is also focused, and designed for serious off-roading. All of this points to a bike that should be a beast to handle, but the Super Adventure S is aimed at riders who desire a sporty ride, want to pile on the mileage in comfort, and plan on taking only occasional forays onto gravel roads and moderately challenging trails. KTM held a press launch for the 1290 Super Adventure S in Southern California, where we discovered that this superbike in adventure-bike clothing is actually a splendid overall performer. 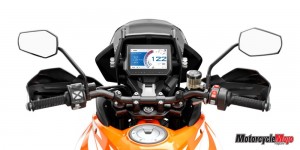 The immediate visual cues differentiating the Super Adventure S from the R are the former’s wheels. And while the R rolls on trail-ready 21- and 18-inch front and rear spoked wheels, the S makes do with 19- and 17-inch cast wheels, onto which are mounted Pirelli Scorpion Trail II radials. It’s also equipped with WP-sourced, semi-active and electronically adjustable suspension that has 20 mm less travel than the R’s manually adjustable suspension. You can adjust the suspension for damping and preload via a directional keypad on the left handlebar switch assembly while using the 6.5-inch TFT colour screen to choose your settings. Suspension damping can be adjusted while riding, but preload (four load-based settings) must be adjusted with the engine running and the bike propped up on the centre stand to unload the spring.

Regardless of which setting you choose – Street, Sport, Comfort or Off Road – because the suspension is semi-active, it uses sensors and a computer to tell it what’s happening at the wheels, and it makes continuous finer adjustments depending on the surface condition. In practice, the suspension works remarkably well, soaking up bumps seamlessly and gliding over rough roads with no harshness. Switching to Sport mode firms it up enough to maintain an aggressive pace through twisty sections of road without wallowing through sweepers, while keeping the bike composed through tight turning transitions. The only noticeable adventure-bike trait the Super Adventure exhibits is the tall arc you make as you swing from side to side when manoeuvring through successive turning transitions. Despite its height, brake dive is modest, unless you’re charging and braking hard going into turns.

As mentioned earlier, the engine is very powerful, but to make things more manageable, KTM has included a comprehensive electronics package including adjustable lean-sensing traction control and combined braking with ABS. Traction control and ABS can be tailored to cope with different riding environments via the different ride modes, which include Street, Sport, Rain and Off Road. 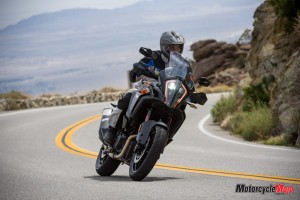 KTM also offers the My Ride app, which you can download onto your smartphone for $12.95. I think it should be offered at no cost, but it does add a lot of functionality and convenience, including turn-by-turn navigation that you can see on the screen, and hear in your helmet headset when connected to the bike via Bluetooth. If you prefer looking at a map while being guided by the navigation system, though, you’ll have to mount your phone to the handlebar, since the bike’s screen is not configured to display a map. With Bluetooth connectivity, you can also listen to music or accept calls. If you’re worried about your smartphone’s battery life when using it for navigation or other functions, fret not: the Super Adventure has a waterproof phone case  that includes a USB port for charging your device. Although this case seems to be tacked on like an afterthought (mounted inside the right-hand side of the fairing), and accessing it is somewhat tight, it is a very convenient addition. There’s enough room in the case for my iPhone 5s and its charging cable, but there didn’t seem to be much more room available for larger phones. There is also a 12-volt accessory outlet mounted conveniently on top of the central fairing bracket, just below the instrument panel.

A Lot of Amenities 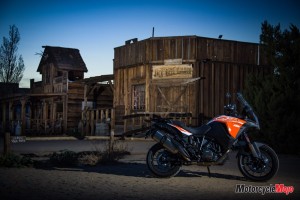 Cruise control and self-cancelling turn signals are standard, but curiously, a heated seat and heated grips are optional. KTM should follow BMW’s lead in this respect and at least make heated grips standard on all its big adventure bikes. The windscreen is height-adjustable, and it can be raised or lowered easily while riding by turning either of the knobs mounted to the side of the screen. It offers good wind protection for the torso and shoulders, though it produces some buffeting at speed. Also standard are integrated saddlebag mounts and all-around LED lighting, which includes adaptive cornering headlights. These lights incorporate lean-sensing, side-mounted LEDs that light up while cornering to provide better vision through turns at night. For riders looking for even more convenience, KTM offers the optional Travel Pack, which includes an electric quick shifter that works the gearbox up and down, an adjustable engine-braking function that combines with the standard slipper clutch to smooth deceleration, and a hill-hold assist that automatically holds the bike still for a few seconds when taking off on an incline.

The riding position is typical of an adventure bike, which means it is upright with very roomy ergonomics that are ideal for a taller rider. The tank rises high, which makes the bike feel bigger than it is, though it’s relatively narrow at the rear, nestling comfortably at your inseam. The handlebar is wide, and tall enough to be an easy reach for my six-foot frame when riding while standing on the foot pegs; seat height is, as expected, tall at either 860 or 875 mm (it’s two-position adjustable). The seat is firm but wide, and proved remarkably supportive during our daylong ride.

Starting the bike does not require turning on the ignition with a key; a key fob is provided for keyless starting, and for unlocking the gas cap and locking the steering remotely. A mechanical bypass system has been incorporated in case you lose the key fob or its battery goes flat.

Clutch effort is light, and the bike launches readily with very little throttle. Twist the grip, however, and the Super Adventure reveals its supersport tendencies: it rips forward forcefully, gaining revs with surprising urgency. And that’s with the traction control on. Turn off the TC and the S blasts forward, lifting its wheel easily even in third gear at speed. The gearbox has very short throws, though the lever felt a bit stiff; the latter might be attributable to my test bike’s low mileage (less than 600 km).

Switching to Off-Road mode disables the ABS at the rear brake and allows the rear wheel to spin at up to twice the speed of the front wheel for better control on dirt. We didn’t ride off-road, however, so I can’t comment on the Super Adventure S’s off-road ability. I have ridden the R model off-road, however, and if you’re serious about backwoods exploring, the R is the Super Adventure model you want.

Despite its supersport spec sheet, the KTM 1290 Super Adventure S is a manageable machine, with lots to offer a sport-oriented rider looking for an alternative to a sport bike, but who doesn’t want to compromise road performance by opting for a more off-road-oriented machine. It’s more aggressive and leans toward the more sporting side of the adventure-bike spectrum than the BMW R1200GS, and is more in line with the Ducati Multistrada in that respect. At $19,499 (same price as the Super Adventure R), it undercuts the BMW by $800 and the Ducati by almost $1,700, and that alone makes it a serious new contender in this hotly contested category.