An impromptu gossip fest with coffee shop locals, an apparition in a cemetery and fantastic winding roads make for a great few days in Georgia.

The first indication that I was entering the Deep South was the road sign designating Virginia SR 20 the “Constitution Route.” The second was the tangy smell of barbecue wafting from what looked like a horizontal oil drum on someone’s front porch. And the third was dropping the kickstand in the parking lot of Appomattox Courthouse, the National Historic Site in Virginia where generals Lee and Grant brought an end to the U.S. Civil War.

I had arrived here to attend the annual Horizons Unlimited Travellers Meeting, and as a part of our weekend, we toured the courthouse grounds. We heard the tales of Lee’s surrender and how Lincoln – in an effort to heal rather than conquer – granted freedom to the entire Confederate Army, bidding them to return home to re-establish their farms and their families. Nearby, however, I was surprised to discover a tiny cemetery for 19 soldiers resting beneath an epitaph recently placed by the United Daughters of the Confederacy: “Dedicated to the memory of those who served in the defense of the Confederate States of America.” Perhaps, I thought, not all southern ghosts are at rest. 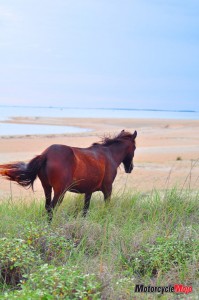 After a weekend of travel tips, inspiration and meeting new friends, I rode south into North Carolina, stopping in Dupont State Forest to enjoy its many beautiful waterfalls, then followed Hwy 64, an amazingly serpentine road that gave both me and my 2006 Suzuki V-Strom a good workout. Rain threatened as I pushed on into Georgia and into darkness. I followed 441 and 115 leading to Dick’s Creek Road, where I gave up finding my intended campsite and finally lay down in a quiet cemetery. At 3:30 a.m., however, I awoke with a start. There in the blackness of the night (and my own bleariness), I saw a woman in a riding jacket standing over me with hand on hip as if waiting impatiently for this trespasser to awaken. I jumped and said, “Hello?” And it was only when she didn’t answer that I realized the woman was named Suzi and the hand on her hip was in fact one of the bike’s hand guards. Clearly, I needed more sleep, but it took a while to shake off my brush with an apparition in a cemetery.

Hanging with the Locals 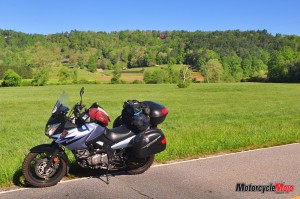 Around 6:00, the first drops of rain woke me and I headed for Cleveland, Georgia, to find a café where I could eat, write and wait out the storm. I left my gear at a round table and ducked into the washroom. When I came back out, three retired Georgians were sitting at my table. Waving me forward, they called, “Come si’down, son. Welcome to Geawgia. Where y’ from?” These three seemed to know everyone who came in the doors, and soon several more joined us. When the first three finally left, more again filled their seats. I sat through three full shifts of locals, catching up on the town gossip and poking fun at each other. As one of them explained, “All you need to know is, it isn’t a lie until someone believes it.” They were slightly taken aback to learn I did not have a weapon with me on my travels, and at least two of them didn’t understand why I would include Martin Luther King Jr. National Historic Site in my itinerary. (But this gets dangerously close to discussing politics – something that didn’t bother any of my new friends in the least, as they went on to debate their president’s latest moves. I was glad to claim non-citizen status and just listen – especially as I was the only one not carrying!) Nonetheless, they were more than helpful in providing directions to MLK’s home, and offering suggestions of other sights in the area.

“If you’re still around, c’mon back tomorrow,” they said as we finally all broke for the day. “We’ll be here.”

The ride into Atlanta was a soaker with powerful winds, but I arrived intact and, to my pleasant surprise, dry. My new Klim gear had lived up to its promise. In the Georgia warmth, however, I experienced the conundrum that all manufacturers face in striking a balance between water resistance and adequate ventilation. I was more than eager to peel off some layers to tour the Atlanta sights. These included both MLK’s childhood home and church, as well as iconic Swan House and the futuristic Marriott Marquis that served as sets for The Hunger Games movies. 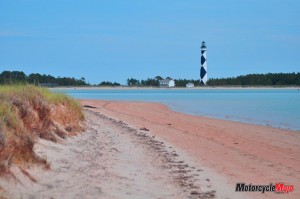 Back at Dick’s Creek that evening, I followed a twisting road to the campsite I had found on freecampsites.net. I lay down in the quiet woods and looked up among the long pines that stretched toward the stars above. The quiet was almost sacred. The next morning, I rode Hwy 60, a fun 56 km of tight turns and switchbacks with a few short straightaways just for variety. Lightly travelled, the road was in perfect condition and generally well cambered. If every hilled region wants to claim its own “Dragon,” this is Georgia’s, complete with two roadside grills welcoming bikers. As I rode, I noticed that, where it showed, the dirt was rust red. For the most part, though, if something could grow here, it did. From grass to shrub to tree to vine, Georgia was swelling with green, often crowding the roads with its fullness.

I then shot over to Blairsville on number 15 to catch Hwy 348, the Russell-Brasstown Scenic Byway. While 60 had been like a timed slalom, 348 began more leisurely through Chattahoochee National Forest. I rode on what felt like a cushion of air the entire 40 km on gently winding curves past several scenic lookouts before encountering more challenging 180-degree switchbacks, all the better for the pristine pavement with newly painted lines. I breathed in the aroma of oak, pine, and tulip trees, which adorned the route.

The Confederates Live On

East of Atlanta I stopped to tour a monastery in Conyers and then the town of Covington, which has been the setting of numerous TV series and movies, including Cannonball Run, Footloose, Halloween II and, unintuitively, Selma and Sweet Home Alabama. I was struck yet again by a statue in the town square that stubbornly keeps alive the antebellum past: “To the Confederate Dead of Newton County: Their gallant and heroic deeds like monumental shafts arise from out the graveyard of the past and mark the tombs where valour lies.”

My free campsite in Ocmulgee Flats Hunt Camp was a trailhead for horseback riding, and I would share the spacious area under the pines with two tethered horses and their riders. But first I had to make it to the site.

The road in, reported to be a kilometre of gravel, turned out to be 7 km of very loose gravel with ruts and a fallen tree across the road. This offered real-life justification for the couple of off-roading courses I had taken just last season: I may never do the Trans Canada Adventure Trail, but if I needed to traverse a rugged patch getting to a campsite, I could do it. I discovered in the morning that the road was a loop and I had come in the back way. In fact, the regularly used route was in good condition and much shorter.

I rode out past groves of giant pecan trees to reconnect with Terry, whom I had met at the Horizons Unlimited weekend. He showed me around the Andersonville National Historic Site, a POW camp for Union Soldiers – and one I had not heard of. The casualties due to starvation and disease were staggering, eroding much of the glory once associated with being imprisoned for your country. Terry then took me for lunch to the Anderson Station Confederate Restaurant, which was filled with Civil War memorabilia, and where I had the biggest burger I have ever seen, trimmed with a tiny Confederate flag stuck in the top. At this point, Terry – himself a proud southerner – offered his considered perspective: “Y’know, slavery could never last. And we lost the war. We really should get over it.”
Coincidentally, my next stop was the Jimmy Carter National Historic Site in Plains, where the 39th president is honoured as a man who understood the importance of reconciliation. Both as governor of Georgia and president of the United States, Carter worked tirelessly to heal the painful legacy of racial inequality. At age 93, he still does.

Into the Depths of Georgia

As the sun sank low, I made my way east to Woodcliff, where I would spend the night with Ron and Stephanie, more new friends from the Horizons Unlimited meeting. The route consisted of dusty and sometimes slippery dirt roads. In fact, they were so far out in rural Georgia that I began to wonder if they ever had to drive toward town to hunt. The couple had bought an old century home and restored it beautifully, including a wonderfully appointed shop for Ron’s BMW R1200GS. We sat up late into the night enjoying stories and laughter until we could hardly hold our eyes open.

In the morning, with recommendations to see River Street in Savannah and Fort Pulaski National Monument, I set out. The city was not a disappointment, with its cobblestone, many city squares and Spanish moss-draped live oak trees shading walks and streets. After a night’s camping on the northern edge of Francis Marion National Forest, I was up for a day of exploration on Cape Lookout National Seashore as I returned through North Carolina. I took the ferry to Shackleford Island, where I photographed a few of the hundred wild horses that live along the seashore, and I would have considered camping there were it not for the incessant gnats and the threat of heavy weather. Instead, I found another free site in Croatan National Forest. It rained all night and I was glad that I wasn’t on the exposed seashore, and that my tarp, stretched out from the bike, covered most of my bivy.

Making for home the following day under clear skies, I began to think back over my adventures. I had stretched my budget by finding free accommodations (a perverse point of pride), and I had exercised my new riding skills. I had also discovered a part of American culture that I had never really experienced firsthand: that for many southerners, the Civil War is barely over, and strong fault lines remain. I took hope from MLK’s words that “The arc of the moral universe is long, but it bends toward justice.” And I found a deepening appreciation for the many like Lincoln and Carter who have laboured toward forgiveness and reconciliation. As I rode north of the Mason-Dixon, I thought warmly of my many new friends, and I whispered in my helmet, “May the long arc continue.”