At a time when many women didn’t even ride, Kathy Hubble proved against the odds that she could compete against the boys – and win

I met Kathy Hubble in 2003, when we raced against each other in the SV Cup Series at Mission Raceway in British Columbia. I was enamoured of her confidence and skills on a motorcycle. When I first started racing, there weren’t many women at the track, and while I didn’t mind racing against and hanging out with the guys, there was an instant camaraderie whenever I met another woman racer. My first thought about Kathy was that she was totally badass! She not only raced motorcycles, she also worked in the stunt industry, had her pilot’s licence, could ride a unicycle like a boss and do practically everything. I felt in some ways that I was meeting a kindred spirit, someone else who was willing to try anything and seemed to have a knack for all things fast and exciting.

We had had some intense battles, bashing bars and going head to head road racing. We had stood next to each other on the podium several times, and the final SV Cup race of that year was super-intense, as she and I and another competitor, “Flyin’ Brian,” had gone all out fighting for the championship. We were three abreast down the straightaway when I inched off the edge of the track and had my worst crash to date. Kathy finished second in the Championship that year, and we’ve been leading somewhat parallel lives ever since. 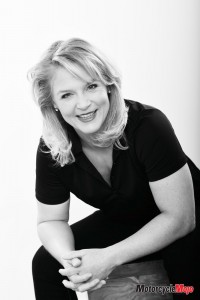 Kathy starting riding and racing motorcycles at the age of seven, when her then new stepdad, Donn, joined the family. He raced sidecars and had five vintage bikes. He told her that if she saved up her allowance and paper route money, she could buy her own minibike. So she did! Her first bike cost her $60 and was powered by a Briggs & Stratton lawn mower engine.

When I ask her what she loved about riding as a kid, she says, “I just loved how cool I felt that I could go out in my backyard and toddle off all on my own, and I still feel this way! Riding gives me a complete sense of independence and freedom.”

Donn and Kathy’s brother both raced sidecars at Westwood Motorsport Park in Coquitlam, B.C., and although she was too young to do that, she begged Donn to let her do some kind of racing, so he allowed her to start flat-track racing in Bellingham, Washington, every Saturday night. Kathy describes racing on those Saturday nights as the “best feeling in the world when I got my YZ80 and raced knobby class with the boys!”

Kathy won the season championship during her first year, then got flat-track tires for the following year and won that class, too. “I felt like I was meant to be there,” she says. “I was so excited all week at school waiting for race weekends to come.”

Girl Versus the Boys 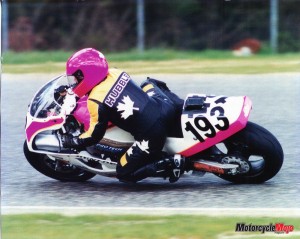 Kathy later won the 125 cc class, and then eventually got into road racing once she was old enough. I ask her what it was like to be the only girl racing against the boys. “To be honest, it didn’t even occur to me that I was racing all boys,” she replies.

Kathy was somewhat of a pioneer in terms of road racing as a woman in the days when very few women even rode motorcycles, let alone raced. “I was a little more aware that I was racing the boys by the time I started road racing at 16,” she says. “People would tell me, or write, that I was the first female to win a road race at Westwood, and things like that. But all I wanted to do was race and win! I didn’t care who it was against, it made no difference to me who was there.”

She only road raced for a few years, though, because in 1990 they tore down the amazing Westwood Motorsports Park, and so Kathy switched gears and focused on competing full time in judo competitions around the world. She says she was “so bummed to leave road racing at that time.”

Kathy grew up comfortable interacting with and racing against men. When I ask her about her views on women-only classes, she says, “I have only ever competed in women-only racing recently when I came to the Okanagan [B.C.] and there was no track, so I took up Hare Scrambles. I grabbed an old Honda CRF230 and won the Women’s class my first and only year there.” (Kathy is 49 years old, FYI.)

“I really appreciated having that Women’s class because I didn’t know anyone, and there’s just a real cool respect and instant camaraderie with women when they compete with one another. We just get each other and become immediate friends, both on and off the track.”

The Best and the Worst 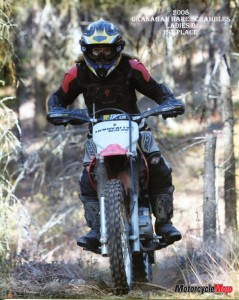 Kathy’s best moment in road racing was back in 1989 when she won the season championship at Westwood. Or maybe it was when she went back to road racing 15 years later at Mission. After all, it was in Mission where an old friend of hers, Troy Burstyk (they used to flat-track race together as kids) ran up to her at the finish line of a race and asked her to help teach at what was then his road-race school, called Westcoast Superbike School. “I think I actually felt really worthy as a racer for the first time when he asked me that,” she says. “He wasn’t asking me because he needed a girl instructor or anything to fill a quota; he just said he needed a fast racer, and that felt really good. I enjoyed my time there more than anything else in any racing.”

Kathy’s worst crash? “Probably high-siding in the off-camber Turn 3 during a Wednesday night practice at Westwood on an RZ350. I broke my foot and had to race that Saturday with it in a cast.” She adds, “I needed the points for the season championship, so I reached down and shifted with my hand! I got my first-ever second place, but at least got the points!”

When Kathy was only 13, a movie called Stepfather was looking for a young girl who could be “beaten up” for a scene. Casting called all the local judo clubs, searching for someone who might fit the bill, so Kathy applied for the job and got it. It would be the start of a very successful stunt career.

From there she did a bunch of TV series throughout her teens, shows like Wiseguy, 21 Jump Street to name just a couple, but her lucky break came when she landed on the movie set of Rumble in the Bronx with Jackie Chan. The stunt coordinator was looking for a girl who could ride a KX250 over a line of 20 cars. She had never ridden overtop of cars before (it’s not really the kind of thing that someone would practise regularly), but Kathy figured she could probably do it, and so she did. If you watch the bloopers at the end of the film credits, you can see that she does have a good crash off the end of one of the cars.
“I think Jackie [Chan] felt bad that I crashed (he broke his ankle on that shoot also, jumping onto the hovercraft), so he gave me another role in the movie! After a couple of weeks of healing from a huge hematoma on my femur, I ended up on that set for another few months.”

It was there that she got to really know the Vancouver stunt community and became entwined in the career path of stunt performer. It was also a definite highlight of her career. “I’ve been in too many other shows to count since then, but I’d have to say Rumble was my favourite, followed by a few fun ones like Smallville, Power Rangers, Lucifer, Supernatural and a few others.”

Kathy does all sorts of other extreme sports, including her newest passion, ju-jitsu. When I ask her what drives her and what fuels her passion, she answers, “I’m not sure really. I just flow from thing to thing that excites me. If it’s a big challenge, then I’m driven even more!”

When she was 45, Kathy went back to judo (she’s a black belt), and won the Worlds in 2013. She says that it was so hard on her body that she decided to try her hand at ju-jitsu. She was teaching judo at a ju-jitsu facility in Kelowna, B.C., and it seemed easier on the body, and more technical and challenging. “I love martial arts because you can never stop learning,” she explains, “and even when you get to black belt, it’s really just the beginning. There is so much discipline required, and always an uphill mind battle. It’s so stimulating.”

I asked what one talent she would like to have that she doesn’t already possess. Her answer cracks me up: “Sewing. Or cooking, maybe? I feel like I really need to learn some domestic skills sometime!”

I totally understand the feeling, Kathy!

Her role model was and always will be her stepdad. “He always had complete integrity, he worked so hard for what he had, he would always lend a hand to anyone to help them better themselves, and if I could be half the person he was, I’d be extremely happy.”

Kathy currently rides a KTM 690 Duke on the street. She says she likes it because when she’s on a side road and nobody’s looking, she can practise her wheelies. “One day I’ll get better at them!”

She currently lives in Kelowna with her husband, Jon. Her thoughts on the motorcycle industry in Canada are that “It’s awesome! I especially love seeing so many women riders out there. It feels like every time I go out now, I see just as many women as men, and that certainly wasn’t the case when I first started riding. And there is such cool riding gear for girls now, too. I don’t have to wear my brother’s leathers anymore!”

What’s next? She plans on winning a couple more ju-jitsu Masters World Championships, teaching judo at her local club and doing stunts in the entertainment industry as long as they’ll have her.

“Oh, and I’ll keep working on those darn wheelies!” she says with a laugh.