All in the Family

Wayne Rudd not only has an eye for the classics, but is also doing his part to preserve an 86-year-old heirloom

That didn’t really matter to his young nephew, Wayne Rudd.

Throughout his years growing up on the family farm near Camrose, Alta., Rudd dreamed about riding a motorcycle, but never got one until he’d graduated high school. That’s when his dad learned Uncle Edwin was selling the BSA.

“I didn’t know what size bike I wanted or anything like that,” Rudd says, “but we went out to look at the BSA in the barn. My uncle wanted $50 for it, but my dad instead negotiated a trade using one of his 1950 Dodge half-ton trucks for my uncle’s 1946 Monarch and the BSA.”

While some teenagers at that time might have been more interested in the latest motorcycles from Japan, not Rudd.

Not Deterred by Age 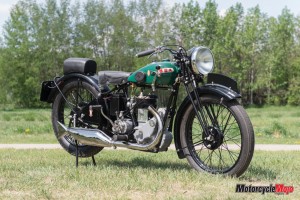 “I recognized the BSA was a classic, and its age didn’t put me off at all. In fact, I really liked the look of it,” Rudd says.

Bolted to the licence plate bracket on the rear fender of the BSA was a 1944 Alberta tag. Although the bike was obviously neglected and likely hadn’t been used for 20 years or more, Rudd was drawn to the charms of the classic British motorcycle and set about preparing to make it run.

His dad helped pull the spark plug so the Lucas magneto on the 349 cc single-cylinder side-valve engine could be checked for life – it gave a fat, blue spark across the plug gap. Encouraged, they changed the oil and poured fresh gasoline into the tank.

“The kick start didn’t work, but I pushed it in gear about 20 feet and dropped the clutch and got on the saddle,” Rudd recalls. “It started, and away we went around the farmyard.”

For Rudd, the BSA is a piece of family history. Uncle Edwin originally purchased the BSA to get to his job as a steam engineer at a coal mine near Cadomin, a small hamlet just east of Jasper National Park. The roads were so bad, Rudd explains, that Uncle Edwin felt safer getting to and from work on a motorcycle than in a car. Although he left the Cadomin area in 1938 and soon got a car, the BSA remained in the family.

Regardless of how his uncle might have used it, Rudd put the BSA to the test, as he says, racing it around the farm on a dirt course, and occasionally riding it on the lonely country gravel roads.

“I kept it around the farm,” Rudd says, and admits, “mostly, I just abused it, but it never missed a beat.” 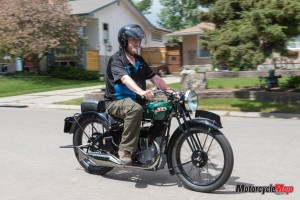 “I kept all of these machines because it wasn’t big money that I’d paid, and there were sheds all around my parents’ farm where I could store them,” Rudd says.

His first brand-new motorcycle was a 1969 Norton Commando Fastback in burgundy metal flake. He didn’t keep this bike long and sold it for $1,000. With that money in his pocket, he had the option of buying a Vincent Black Shadow from International Cycle in Edmonton, a convertible 1958 Cadillac Eldorado or a new Arctic Cat snowmobile.

“Which one do you think I bought?” he asks with a sigh. “Yes, I bought the Arctic Cat.”

In the early 1970s, he sold the snowmobile to get back onto a new Norton Commando, followed by a 1975 Honda CB750. His last “used” motorcycle-related purchase was a 1928 Indian Scout engine that he discovered while shopping with a friend for a used fridge. In the weeds in the backyard of the house they were visiting sat the engine, and Rudd got it for $5.

By that time, Rudd was playing bass guitar in the bluegrass/country/rock/folk band Winterwood. Their claim to fame was opening for Ry Cooder at a show in 1977, but by 1978, the band had played itself out and Rudd moved to Calgary, where he got a job with the City. 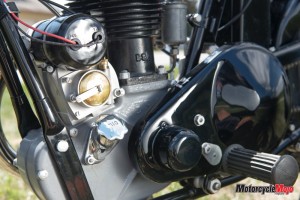 “I retired in 2012, and always had the bikes on the back burner,” Rudd says. “I didn’t want to sell them. I wanted to restore them – but couldn’t do them myself because although my dad was very mechanically inclined, I’m the opposite.”