Does a Dyna lose its spunk when it becomes a Softail?

It’s not every day you overtake a Ferrari F12 Berlinetta on a twisty mountain road . . . while you’re riding a Harley.

But that’s just one of the cool things that happened to me while I was testing Harley’s completely reworked and reclassified 2018 FXLR in Southern California, one of nine all-new motorcycles that make up a reimagined Softail line.

I’d just turned off the Pacific Coast Highway in Malibu onto Latigo Canyon Road, which snakes its way up to famous Mulholland Highway and the Rock Store. These minor roads are the undisputed territory of local speed lovers, unknown to tourists and avoided by natives in favour of more efficient highways. 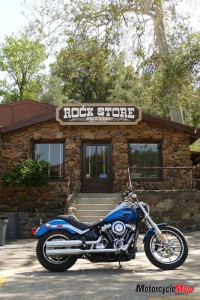 Seeing a flash of the Berlinetta’s tail a few corners ahead, I’d decided to put the Low Rider to work; after all, I’d ridden this bike directly to the mountains in order to lay it bare. The Dyna series had long been my favourite of the Harley strains, stout and sport-intended bikes preferred by riders who put handling first. The Softail line, on the other hand, has always been about looks. When Harley announced that for 2018 the Dyna bikes had been redesigned and would be reintroduced as Softail models, it caused a bit of a rumble among Dyna devotees.

It was a bold move, in fact the largest development project and launch of new product in Harley-Davidson’s 115-year history – nine hallmark models across two distinct lines stripped to their abstract essence, then rebuilt mechanically from the ground up: new wheels, new frames and chassis, new suspension, new drivetrain.

“People want tradition, but they also want technology,” says Paul James, director of product planning at Harley-Davidson. “They want to experience the best of both worlds, and that’s what these motorcycles deliver.”

The nine reborn bikes – Sport Glide,
Street Bob, Fat Bob, Low Rider, Breakout,
Softail Slim, Fat Boy, Heritage Classic and Deluxe – each retain their distinctive personas and styling queues, though all now sport the clean, Softail-esque rigid-rear look by sharing a new carbon steel tubular frame that’s both lighter and stiffer than previous frames. The new frame and chassis design is said to increase lean angles while providing sharper turn-in response. I was anxious to put the new engine and chassis to the test, and the sight of the Berlinetta’s white tail wiggling up the road ahead had the effect of a shiny fishing lure. 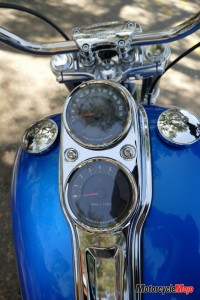 The new 107 ci (1,753 cc) Milwaukee Eight engine used across the Softail line is phenomenal. Power is smooth and everywhere, though especially thick in the low to middle range. Since this new V-twin uses dual counterbalancers to cancel primary vibration, it can be mounted directly to the frame, which increases chassis stiffness, further improving the bike’s handling. Despite the frame mounting, vibration is negligible, with only a slight buzz coming through the handlebar as you approach 4,000 rpm.

Just a few kilometres up the dizzying road and it was clear this Softail Low Rider is a Dyna at heart. I wasn’t dragging any hard parts and I was reeling in the Ferrari corner by corner. As the driver saw me in the rearview mirror, his cornering became a little more chaotic and I was thinking maybe I should back off so as not to become a distraction. It’s a dangerous road with oft-dirty blind corners and huge drops, and it just felt a little wrong to pester someone trying to manoeuvre a half-million dollars’ worth of machinery.

A few corners later and the Berlinetta pulled off the road to let me pass, and then it was all bluster and dust as he pulled back on the road behind me. The guy looked a little wild-eyed as I went by. Definitely over his head in that car, and I’m guessing he didn’t tell his pals about getting chicked by a girl on a Harley.

Anyone still worried about the Dynas losing their mojo as Softails can sleep tonight. The Low Rider was right at home in the labyrinth of slinky back roads that crisscross the Santa Monica Mountains. The bike’s cornering clearance is indeed more generous, steering is lighter and the handling very nimble, a true feat when you consider we’re talking about a classically styled cruiser with a 19-inch front wheel.

Is it still easy to touch the foot pegs on the Low Rider? It’s not difficult, especially if you’re chasing Ferraris, but there’s noticeably more clearance than on past versions, and when you do slide a peg on pavement, it’s not problematic. As long as you stay cool, the Low Rider’s tracking will remain rock solid. Other Softails in the line will proffer quite a bit more clearance than the low-slung FXLR.

If Looks Could Thrill

The Low Rider’s profile is immediately recognizable with its signature 70s-style stepped seat, headlight brow, bobbed fender and tank-mounted gauges. What’s missing is the unsightly battery box, and the two-into-one exhaust has been replaced by attractive two-into-two shotguns. Aficionados will be a bit fussy about losing the trademark dual shocks out back, though the hidden monoshock performs very well, and can be easily adjusted for preload. Up front is the high-performance fork introduced last year on Harley’s touring models that delivers 130 mm of travel, and does just fine soaking up irregularities.
I have long legs (34” inseam), and although I felt a bit like a spider at stoplights (26.2” seat height), I never felt cramped while underway, and in fact found the Low Rider’s compact rider triangle agreeable for aggressive riding. On long freeway stints, the mid-mounted foot pegs allowed for good, wind-fighting core engagement. A new torque-assisted clutch decreases lever effort, but the pull is still taxing during hours of canyon carving or around-town riding.
When I finally arrived at the Rock Store on Mulholland Highway, the parking lot was completely empty, which is a slightly sad feeling when you’re riding such a cool motorcycle, but the fact it’s a weekday is also the reason I had all the twisties to myself.

This famous motorcycle hangout is a must-visit if you’re ever in Southern California on a weekend, and if you want to experience it to full effect, stop by on a Sunday. The main structure, built entirely of volcanic rock, served as a stagecoach stop in the early 1900s and later a gas station. Ed and Veronica (Vern) Savko, purchased the place in 1961, and opened it as a local grocery store to serve the tiny mountain community of Cornell.

The Legend Lives On

Because the roads in every direction are challengingly steep and twisty, it’s no surprise that motorcyclists started showing up at the Rock Store to enjoy a cold beverage and some camaraderie. Over the years, it’s become a famous gathering spot for the moto crowd, studded with all flavours of bikes and riders, not to mention moto-minded celebrities (Jay Leno, Tommy Lee, Harrison Ford and Matt LeBlanc are regulars).

I mounted up and headed back down to the city for the night, taking Decker Canyon Road, a narrow twister on which I had my first accident on a motorcycle back in 1986. I was trying to keep up with a far better rider when I locked up the rear brake deep into a potholed corner and – bingo – high side.

Decker’s road surface, much like the bike I was riding, is totally improved. Over the years, the Motor Company has done an amazing job retaining the essence of what a Harley is supposed to look and feel and sound like, all the while discreetly implementing new technologies that benefit both safety and rider experience. The optional ABS on the unit I was riding, for example, would probably have saved me from that painful accident.

This 2018 Low Rider was a winner for me: easy to ride around town but likes to party in the corners; looks great straight out of the crate, yet is still asking for some custom touches. But moreover, the tasty goodness of this one model is evidence the entire line of Softails is better than ever.

“One thing I think we’ve achieved is a perfect balance of the best of the Softails and the best of the Dynas,” chief engineer Ben Wright says. “We’ve married looks and the performance into one architecture.”

Wright believes these are the best cruisers Harley has ever built, and after a couple of days on the Low Rider, I have to agree. My fast-riding friends will be happy to know the Dyna spirit is safely embedded in the new Softails. Rather than being neutered, these bikes have been further endowed. Just ask the guy in the Ferrari.