It’s not so much the destination, but the journey that makes a great road trip.

It all started out, as most road trips do, with a gaggle of riders sitting around in a back room trying to decipher the mystery of a crossplane crank and trading stories of their past road adventures.

“Have you guys ever been to what was once the largest waterfall in the world? Now it’s just the prehistoric bones of a 5.5 km-wide cataract at the end of a 30 km chasm.”

Here were Bruce, Shel and I ready to pull the trigger on our first trip of the year. Bruce would be on his Suzuki 1200 Bandit, Shel on his Ducati Multistrada, and yours truly with my Yamaha Royal Star Venture and cargo trailer full of camping gear.

As you all know, a large part of the enjoyment of a road trip is the anticipation and packing. Camping gear has to be sorted, the trailer bearings lubed and maps copied. My bike’s oil is changed to allow for long rides in hot weather, and before you know it, we’re meeting and taking off through Vancouver, up the historic Fraser Canyon and on to Kamloops for the first night’s layover.

Leaving Kamloops, we head east from Vernon on Highway 6 toward Cherryville and the Monashee Pass through lush farm country and past lumber operations. Then on to Nakusp after crossing Arrow Lake on the cable ferry. Keep in mind that it’s an inland ferry – not part of BC Ferries – so the usual loading rules do not apply and bikes have to get in line like everyone else.

On the road into Nakusp, take a look at the hydro poles on your right. They are a unique crossbar design and the local osprey take advantage of this to build huge nests on them – adding to the nests each year to the point where they start to look like Vancouver condos.

Still on Hwy 6 out of Nakusp, the road wanders through some high lakes and what resembles a green shag rug of evergreen forest until we descend into New Denver, where Tamara awaits us at the Nuru Coffee Bar. She rides a Ducati Monster and owns Nuru, so her connection with riders is real and immediate. 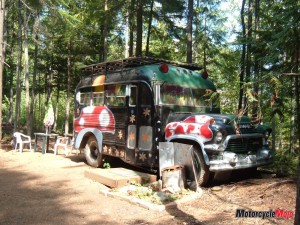 The road from New Denver gets really interesting as we head east on Hwy 31A to Kaslo, and finally Hwy 31 to Toad Rock Motorcycle Campground, just north of the Balfour ferry.

Great pavement, little traffic, spectacular abandoned-mine scenery on both sides of the road and gnarly twisties provide multiple layers of bliss for any rider. In the past on this road, I saw my first wild turkey in Canada, and on this trip, a turkey vulture is guarding something at the side of the road and refuses to budge as we blast by. Damn, they’re ugly.

We’ll stay at Toad Rock for a couple of nights, so we don’t just hit there and pack up the next morning – we’ll have time to tour and see the spectacular Kootenay countryside. Toad Rock is most likely the best motorcycle campground in the west. The first time I stayed there, I thought I’d died and gone to motorcycle heaven run by an angel called Mary Laird.

Mary greets us warmly as old friends and meets her newest campers, Bruce and Shel. While setting up camp, Shel and Bruce are introduced to Happy, the camp pig, as he waddles onto our site, mooching for anything to eat, grunting happily. In the evening, we wander down to the pavilion to join the Toad Rock family gathering, laughing with new friends and ruthlessly murdering the truth with our travel tales. There are no rules when you’re telling travel stories. Sitting around a campfire before sacking out is the ultimate camping experience, isn’t it? 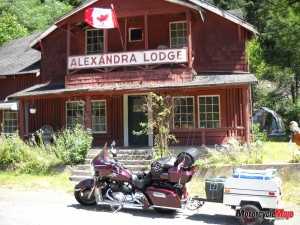 After a camp breakfast of coffee and burnt toast, we ride into Nelson so Bruce and Shel can explore. Shel is searching for a 93 octane at a Chevron station, but there isn’t one, so he opts for a can of octane boost and we end up at the Oso Negro Cafe to unwind in the shade of its fancy patio.

Great final night at Toad Rock with the crowd at the pavilion, and after packing up camp, we head to Nelson for lunch and fuel before heading for the U.S. border via Castlegar and Grand Forks. It is pleasantly cool over the Blueberry-Paulson Pass after the oppressive heat of Castlegar. A quick stop at the Nancy Greene rest area re-establishes the plan to meet in Christina Lake for lunch if anyone gets separated. 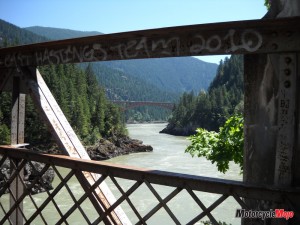 The border crossing at Danville, south of Grand Forks, is tiny compared to any of the other major ones we usually use, and the U.S. Customs gent has all three of us approach, rather than one at a time – much more efficient for him, I guess.

Heading south from Curlew, Washington, I think we have made a mistake, as the road is winding and narrow, and each side is covered in heavy bush. We are just waiting for something furry to leap out in front of us, so we are relieved when we pull into the impressive town of Republic, where we promptly get lost trying to get out of town.
After getting directions from a Republican, we get back on Hwy 20 to 97, then south to Omak, where we score the last two rooms at the Omak Inn. That’s what happens when you ride without reservations. People may ask us where we’re headed, and we reply, pointing, “That way.” So far, we’ve never had to camp at the side of the road.

The front desk clerk, Adrian, is the proud new owner of a Honda CBR600RR, so he checks out our bikes pretty closely and marvels at our “cramp busters”, floorboards, heel and toe shifter, cruise control, radios, trailer and the fact that we could ride comfortably for more than an hour at a time.

Into the High Country

From Omak, we cut off onto Hwy 155 through the Colville Indian Reservation, which runs through high ranching country, showing evidence of past fire activity, but is significantly cooler riding than if we had taken a valley route along Hwy 97. Alma and Dave’s Fruit and Produce on Hwy 155 provide us with some local cherries and a cold drink, as well as a lesson from Dave about local history and geology.

According to Dave, these huge, house-sized boulders we saw strewn across the countryside were the result of a monstrous flash flood that occurred when an ice dam broke and a 107-metre-high wall of water swept the area after the last ice age. This is confirmed when we visit the Dry Falls info centre later that day.
Highway 155 eventually leads us down through a winding chasm of desert to Coulee City and the Grand Coulee Dam, which is our first major destination. This thing is massive.

Constructed between 1933 and 1942, it was part of President FDR’s Depression-era works program, and today is the largest hydroelectric
power producer in the U.S. Damn near a kilometre and half long and167 metres high, it is the perfect venue for the summertime laser light show that splashes across its huge face.

We’re cooled off now, after an hour in the visitor centre, so we head west down Hwy 2 and then south on 17 to the Ice Age relic, Dry Falls. Once the largest falls in the world, this precipice is 122 metres high and is about 5.6 km across its arcing face – about five times as wide as Niagara Falls. Today, it is dried up completely – a skeleton of its former might. You can still see the “scour pits” where the water cascaded into the channel below. These now look like small lakes.
Over several millennia, the water flowing from glacial Lake Missoula carved a canyon more than 30 km long. This canyon is now a water playground with huge lakes.

It’s gotten really hot. Farther west, the countryside along Hwy 2 has changed again to pure prairie, alternating between rocky flatland with 60-metre-high dust devils and a defined boundary with about 300 acres of new green wheat.

A necessary stop at the Hot Rod Cafe just outside Wenatchee for hydration nets us a surprise spectacular setting – a great place if you’re a gearhead. We are totally immersed in NHRA, Sprint car and virtually any type of motorsport memorabilia. The topper is the Sprint Car sitting on the roof.
When we get onto the bikes for the final leg to Leavenworth, Wash., and our stop for the night, the thermometer on my bike reads 109 F. We needed that stop. We get the last overflow camping spot at the Leavenworth KOA and set up camp in 104 F.

That KOA pool draws me like a magnet halfway through setting up. I couldn’t care less that 50 little bladders have emptied themselves – I have to do something to get relief from that heat. A nice quiet night’s sleep, despite the overcrowded campground and the tuner car crowd next door.

The Last Leg for Home

Riding east through the Mount Baker/Snoqualmie National Forest is mountainous, scenic two-lane, and I can’t remember ever going through Steven’s Pass before, although the buildings at the summit are pretty striking institutional architecture, reminding me of Mussolini’s Italy.

I had promised Shel a treat once we got to Anacortes – the Marine Supply and Hardware store. To catch the 2:50 p.m. ferry to Sidney, B.C., he budgeted a half-hour inside the store, which, if you’ve never been there, resembles a Second World War supply depot or the old basement at Capital Iron in Victoria.

There are about 10 of us bikers loaded on the car deck. We wander around the boat as usual until we hear cannon fire and come upon two square-rigged ships having a battle on the ferry route. We did hear the booms and we did see cannon smoke, but we didn’t see any shattered masts floating nearby or blood on the orlop. If Washington State Ferries makes this a regular occurrence, I’m sure its ridership would skyrocket.
This ferry ride caps off a unique trip through unknown territory in the wilds of the U.S.A., in addition to an impromptu geology class.