The Complete History of an American Original

Every mainstream marque in motorcycle history has at least one book written about it, and now it’s Victory’s turn for a definitive history.

There are a lot of Victory motorcycle fans out there, and for good reason. It was an amazing brand. Every Victory owner I have ever spoken with loved the bike – although some minds changed when news came about shuttering the factory doors. 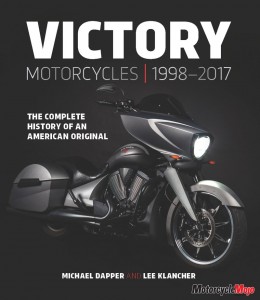 Michael Dapper, founding editor of Victory Rider Magazine and former employee of Victory from its very early days, and Lee Klancher, photographer and author of many books for the gearhead, have released this book that chronicles the Victory brand from its initial concept and the beginning of the market research in 1993 to the release of the first Victory V92C motorcycle in 1998 and right up to 8:15 a.m. on January 9, 2017 – the moment that Polaris executives told its employees, and the world, that Victory would be no longer. The last Victory (a red Vegas) rolled off the line the next day at 9:36 a.m.

The first portion of the book was originally published as The Victory Motorcycle in 1998 – a publication that is now out of print. In addition to explaining how a modern motorcycle brand gets past the initial thoughts scribbled on a proverbial napkin to the very first prototype and to the first machines to come off the production line, the authors know the brand inside and out and include many anecdotes from the people behind the scenes who made the Victory brand happen.

Also included in this hardcover, 192-page coffee-table book is detailed information on every Victory model ever produced, including design notes from engineers and designers, model specs, paint colours and quotes from employees and journalists around the world.

In the end, the brand had image problems that no amount of marketing could fix, and the production output was minuscule compared to its American competitor, making it financially unfeasible to continue.

If you’re a Victory owner or fan, or just like motorcycle history, you’ll appreciate this very interesting account of the first mass-produced, all-new American motorcycle since the 1940s.