A small boy’s dream evolves into his lifelong love of motorcycles. 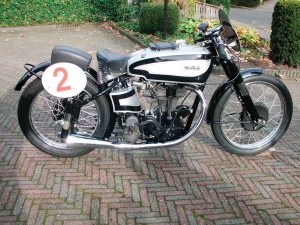 The bus was stopped at the intersection. A small boy sat on the upper deck at the right front seat, staring at the showroom of Robb Motors. “Robb’s,” as people used to call it, sold cars and motorcycles. It had models for every price range of car, and all were from prestigious manufacturers – Rolls-Royce, Bentley, Jaguar, Rover, Austin, to mention a few. It was also a retailer for Norton motorcycles, which is what interested the boy on the bus. Not only did the dealership sell road bikes for everyday use, it also sold racing motorcycles, and standing on the showroom floor was a brand-new Manx Norton in full racing trim, complete with clip-on handlebars, racing seat, rear-mounted foot pegs, a small racing screen and a tach with a moveable red-line marker. The boy on the bus could not take his eyes off it, even when the bus continued on its way, taking him to school.

All day the boy thought about that Norton, and as soon as school finished, he boarded the bus to take him home. The journey took him past Robb’s again, at which point the boy jumped out and walked into the showroom to get a closer look at the Norton. Nothing in the world could be nicer than this, and he looked at it from every angle – even feeling the twist-grip throttle – and imagining what it must feel like to be riding such a dream bike. The exhaust pipe swept back from the cylinder head and ended in a large megaphone alongside the rear wheel. He smelled the leather of the seat, and while he was imagining himself riding this beauty, his thoughts were interrupted by a hand resting on his shoulder. 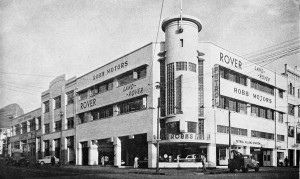 A saleperson had been watching him and decided that he needed to give this boy something to think about. “Would you like to sit on it?” he said. The youngster could hardly believe his ears “Yes sir, I would love to,” he replied. “Climb aboard. The bike is on a stand and it won’t fall over.” The boy thought that his heart would burst from excitement as he swung his leg over the seat and climbed on. Everything just seemed to fit so naturally – the hand grips were waiting for him, the tach and windscreen slipped into place in front of him. And although his legs were still too short for his feet to reach the foot pegs and his hands were also still too small to allow him to reach the front brake and clutch levers, he could feel that this machine would one day fit him perfectly. He loved the feel of the fuel tank between his knees, with the lovely aluminum fuel cap located between his chin and the handlebars.

The salesperson told him to stay there as he went over to his desk and took out a camera. He took a picture of the boy on the bike. “Come back next week and I will give you a copy of this photo,” the man said. The boy was at a loss for words as he carefully dismounted.

The whole of the following week, all he could think about was the prospect of getting that photograph of himself sitting on the Norton. Finally the day came, and he collected the photo from the kind salesperson. For this small boy, the love of motorcycles was born on this day.

That photograph was my most prized possession for many years, but unfortunately I no longer have it with me. My bicycle was my substitute for that motorcycle, and when riding it, I used to pretend that it was the Norton. I was eight years old at the time. From then on I was hooked, and all I could think about was that one day when I would be able to buy a motorcycle like that Norton, and make all of my dreams come true.