A new urban commuter with a penchant for highway travel

It’s been exactly seven years since BMW Motorrad re-entered the personal transportation sector, after coming to the party a bit too early back in 2000 with the, er, idiosyncratic C1, prices for which have since gone through the roof – very aptly, since of course it had one. BMW’s comeback to the two-wheeled world of urban mobility came in July 2012, with the advent of its maxi-scooter, the C650GT. Its parallel-twin engines were and still are made in China by Loncin – BMW’s established Asian partner, which had from 2009 onward also produced the G650GS single-cylinder motorcycle’s 652 cc engine. The German manufacturer’s steep pricing for its twist-n-go twins hasn’t deterred 70,000 examples of them from finding customers since then. 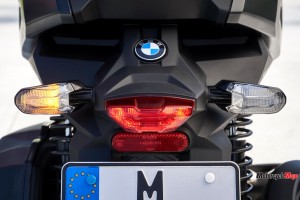 Now BMW is entering the even larger 300–450 cc midsize global scooter segment representing around 40,000 units annually, with the C400X launched at last November’s EICMA show in Milan – appropriately, since Italy is expected to be the largest market for the 65 per cent of total production that BMW’s scooter project manager, Peter Maier (who led the creation of the C650 models), says the German company expects to find homes for in Europe. But this time around, the entire vehicle, rather than just the engine, will be built in China, though Maier is at pains to stress that BMW will exercise super-tight control over that process, just as it does for its G310 motorcycle models built for it by TVS in India.

“This midsize scooter is 100 per cent a BMW product,” Maier insists. “Every single part down to the smallest screw, whether in the engine or bodywork or chassis or instrument, is a BMW component. We are responsible for every element from design to manufacture, which is closely supervised by our engineers, so it’s completely built to BMW quality standards.” This is doubtless aimed at allaying any concerns of customers with long memories, after BMW switched production of its complete G650GS motorcycle to the Loncin factory in 2009. But it soon became aware of various quality problems associated with outsourcing it to China, and repatriated manufacture to its Spandau factory in Berlin in 2011, leaving Loncin to manufacture only the engines. However, judging by the good build quality of the array of C400X scooters fresh out of China that awaited us for the June press launch just north of – where else? – Milan, such issues have been successfully addressed this time around. Indeed, the perceived quality of the switchgear, or of the plastics of, say, the pair of lockable storage compartments in front of your knees, with a 12 V socket in the right one, which has room to charge a large smartphone, is fully in line with competitors’ products, and arguably of better quality than on BMW’s own larger C650GT model. 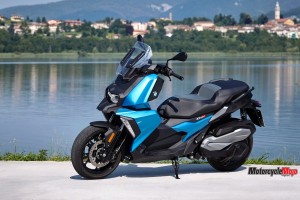 Having begun clean-sheet development of the C400X four years ago in 2014, production of this 2019 model scooter began in China on July 1, according to Maier, with deliveries to North American dealers commencing in the fourth quarter of 2018. As of this writing, prices were not yet available. In some ways, the BMW offers a step up from its competition with its level of equipment, such as the optional 6.5-inch full-colour TFT screen, the first on this type of scooter. The two big BMW roundels on either side of the C400X obviously count for something, as does the very Bavarian shade of Zenith Blue it’s available in, alongside Alpine White with a broad red seat stripe, or Black Storm Metallic. The C400X’s sporty styling is certainly distinctive, and clearly denotes its brand heritage, with a vestigial beak hinting at its GS relatives, and BMW’s trademark asymmetric styling for the LED headlight.

Despite the C400X label, BMW’s new midsize scoot is actually a 350 cc model, powered by a liquid-cooled, fuel-injected, chain-driven SOHC, four-valve engine, which makes a respectable 34 hp at 7,500 rpm, and peak torque of 25.8 ft-lb at 6,000 revs. The BMW’s wet-sump engine is attached to a CVT transmission, and following traditional scooter practice, the entire powerplant comprises part of the cast-aluminum double-sided swingarm. 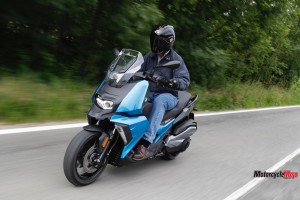 BMW has tried to ensure the C400X lives up to its established standards in terms of refinement, employing a gear-driven counterbalancer inside the engine, as well as a unique rubber mounting system for the swingarm/engine unit that the firm claims eliminates vibrations without sacrificing chassis rigidity. There is indeed hardly any vibration, and the mirrors stay still at all speeds up to the 139 km/h claimed maximum – though I saw an indicated 143 km/h on one of Italy’s high-speed highways. There, the BMW was completely stable at any speed, and what, despite appearances, is a non-adjustable screen (shame!) actually gave a surprising amount of protection to a 5’ 10” rider. There’s an optional taller screen (and lower 760 mm seat, as opposed to the 775 mm stock one) for those who wish. It’s a pretty satisfying mileater despite the engine’s smaller capacity, though its biggest attribute is its torquey response from low speeds – BMW has obviously focused on delivering zestful acceleration as a prime part of the package.

Not Your Regular Scooter