A ride on BMW’s most powerful bike to date reveals astonishing acceleration and handling.

My first glimpse of the BMW HP4 Race was earlier this year during a California Superbike School (CSS) event. Dylan Code, son of Twist of the Wrist II author and CSS founder Keith Code, rolled out the shiny, nearly $100K limited-edition motorcycle/work of art and parked it carefully on a black carpet. He then dutifully set out four poles connected by red tape to hold onlookers back from touching the exclusive machine. It looked like a Hollywood celebrity, flanked by bodyguards. Immediately, students began to gather around, whispering techy facts and pointing at the fancy bits.

The HP4R is the “bike that no one asked for but that every track rider wants after they ride it,” Dylan said. “It’s a production prototype factory race bike that exceeds the build quality of a World Superbike. The price tag is high, but the riding experience is even better than the price tag suggests.”

Because the California Superbike School is always running events at racetracks around the United States, and because it is already associated with BMW and uses BMW S1000RRs for coaches and students, it made sense for BMW to loan the school one for test rides for interested buyers. “For us, it’s a real treat to have around. I’ve had plenty of opportunity to ride it myself and can say it’s the best track bike I’ve ever ridden,” Dylan said.

Step Up to Ride the Rocket 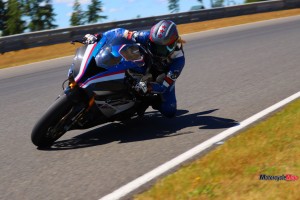 The school decided that all the coaches should have a chance to test ride the bike at some point during the year. So, during a stretch of five days of teaching at the Ridge Motorsports Park, Washington, I decided I was ready for my chance. The Ridge is a fantastic flowing track with elevation changes and a great variety of corners. It often tops the coaches’ list of favourite tracks in the U.S. The day was hot and sunny, and all conditions perfect for such a test ride.

I was to take it out during lunch, and I have to admit I was feeling nervous as the time neared. The sheer price tag of the HP4R reminded me that any mistakes on the track would be extremely costly – and by costly, I mean it would likely bankrupt me. When Keith sauntered toward me, grinning and asking about my upcoming test ride, I told him I was planning on taking it easy and not riding it too hard or aggressively. He threw his head back and laughed and said, “Misti, that bike begs to be ridden. It inspires confidence. Go out and ride it as it’s meant to be ridden.” He paused and then added, “It’s more fun than the S1000RR.”

The HP4R is an exotic, limited-edition, track-only weapon. It features a full carbon frame and fairing, as well as carbon front and rear wheels, making it 40 kg lighter than the S1000RR it’s based on. That’s a mere 171 kg fully fuelled. Combine that featherweight chassis with the 1,000 cc, inline-four, race-ready engine that produces 215 hp at 13,900 rpm and you’ve got a rocket ship of a motorcycle – the closest thing that most regular folks will get to riding a World Superbike. Only 750 of them will be available worldwide, and with a price tag of $95,000, it’s an exclusive work of art perfect for those who are looking for a spectacular track-riding experience.

A Rundown of the Details 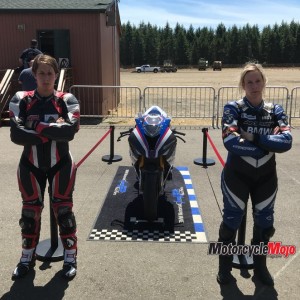 Before I rode the bike, Dylan sat me on it and began going through some of the seemingly unlimited customizable options: everything from the programmable BMW slick Dynamic Traction Control and Engine Brake Control to the clip-on handlebars that can be rotated in or out and the seat height that can be raised or lowered to three different settings.

The savvy electronics also feature other adjustable options like the much-needed wheelie control and launch control, and a pit lane rev limiter that can be activated on the fly. Öhlins suspension components include an FGR 300 fork and TTX 36 GP shock, exactly the same as the components used in World Superbike championships. Suspension offers colour-coded adjustment knobs for compression and rebound, while the fork features a click setting function for the spring preload.

As I was trying to wrap my head around all the possible options and tricked-out displays and buttons, including the 2D dashboard, GPS and 2D data logger, and a factory-unlocked ECU for endless customization of power maps, Dylan asked me, “How much engine braking do you want?”

“Uh, why don’t you just set it up exactly as you usually have it and I’ll ride it like that,” I replied. As a rider who normally makes as few adjustments or changes as possible, my brain was spinning with the infinite number of options.

There are four riding modes (Wet, Intermediate, Dry 1 and Dry 2) that all have plus or minus setting options to further dial in the exact riding specs that the rider is looking for. You name it and it’s most likely adjustable.

The Butterflies Are Ready for Flight 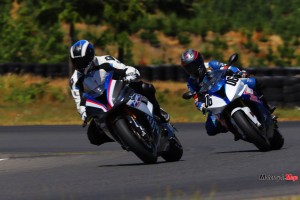 Dylan fiddled quickly and effortlessly with several buttons, putting me into Dry 1 mode with his usual settings, and expertly warmed the bike to exactly 90 F. I felt the butterflies creep in again as I put my helmet and gloves on and got ready to enjoy the rare and sought-after ride. As I sat on the bike, Dylan pointed… 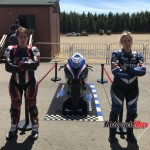