» Articles, Featured Bike, Issues, November 2018 » Too Much of a Good Thing

Too Much of a Good Thing

With budgets cut, there were only so many ways to make the Manx Norton competitive, albeit unrideable.

The Manx Norton has no rivals for the accolade of being the ultimate British racing single in both 350 and 500 cc configurations, and as a production race bike, only the later TZ250/350 Yamahas can match its global appeal and formidable record of success over such an extended period in the hands of its customers. Indeed, the Manx’s popularity and copious race wins imbued the Norton marque with an aura of quality that extended right down to its humblest roadster, in a way few other brands have ever managed besides Ducati. That’s a key commercial justification for going racing in the first place, a strategy perpetuated today by the marque’s current owner, Stuart Garner, in taking Norton TT racing in the Isle of Man with some degree of success.

The introduction in 1950 of the double-knocker (DOHC) Manx engine and the Ulster-built “featherbed” frame designed by the McCandless brothers, enabled Norton’s Bracebridge Street factory to keep abreast of the European multi-cylinder opposition for a few extra years, after providing Geoff Duke with the means to take both 350 cc
and 500 cc World Championships in 1951, and the 350 cc title again in 1952.

Thanks to the efforts of the factory race team in the 1950s, Norton held a similar status on two wheels in the British public’s consciousness as Jaguar had earned on four through its World records and Le Mans 24-Hour race victories. In Norton’s case, this was achieved by Duke’s against-all-odds World titles, and maintained by a brave if stubborn defiance of the inevitable threat posed by the so-called foreign multi-cylinder designs from Italy and Germany that, as the ’50s flew by, challenged Norton’s racing dominance ever more successfully.

The single-cylinder Manx Norton ultimately represented a gallant example of the traditional British love of the underdog, so that even after the factory team withdrew from racing at the end of 1954, Norton’s image was upheld by the hundreds of privateers from many different nations who continued to race Manx Nortons successfully – and, in many cases, profitably – right up until the early ’70s. 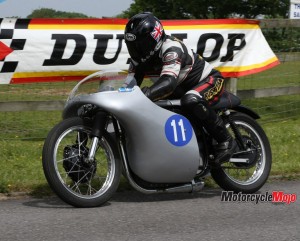 But as far as World championships went, Duke’s trio of titles was the end of the line for Norton, although the British factory continued to develop new ways of keeping its aging singles competitive by maximizing their advantages of lower weight and reduced bulk, particularly in terms of frontal area, against the wider, heavier fours. This resulted in the “Silver Fish” Kneeler frame in 1953, and the following year’s low-slung F-Type (for “flat”) engine with its horizontal cylinder, a concept borrowed from Moto Guzzi, whose sleek ultra-lightweight singles defeated the more powerful Gilera and MV Agusta fours to win the 350 cc World title in five successive seasons.

But Norton race boss Joe Craig’s attempts to emulate Guzzi via the F-Type were stymied when, on the same day as its debut test at the MIRA test track with Ray Amm in October 1954, the board of directors at AMC, which had purchased Norton one year earlier, announced the company would be withdrawing immediately from Grand Prix racing. Henceforth, Norton could only race what it sold, which meant that the Birmingham firm’s race shop (which continued operations until 1962) would only develop and manufacture the 350/500 cc Manx customer racers. These duly became a mainstay of road racing throughout Europe and Australasia, and at all levels from club racing to the Continental Circus, where Nortons stacked Grand Prix starting grids for two decades, especially after Moto Guzzi and Gilera pulled out of racing after 1957.

In addition to making countless improvements to the engine, many of which found their way to the customer Manx models, Norton’s development engineer and race boss Doug Hele continued to explore reducing the existing Norton singles’ top-speed handicap versus the fours, without going to the expense (in any case, now forbidden) of developing an all-new engine, like the F-Type. His most extreme such experiment appeared in practice for the 1960 Junior TT on the Isle of Man, in the form of the 350 cc Lowboy prototype. Fitted with a standard 1959-spec 40M engine with hairpin springs but no engine number, denoting its factory genesis, this radically reinvented the Manx Norton’s architecture in order to achieve a 75 mm reduction in the height of the motorcycle, with consequent advantages in top-speed performance. The centre of gravity was also stated by Hele to be 52 mm lower than on a standard Manx.

This radical prototype was tested successfully at MIRA in April 1960 by Dave Chadwick, Norton’s new signing, who was supposed to ride it in the Junior TT after reporting excellent handling and no problems with the rear tire overheating, thanks to the exhaust pointing straight at it. But the next week, he was tragically killed at Mettet in Belgium, so for the TT, the Lowboy was given to Eddie Crooks, winner of the previous year’s Manx GP on a Norton. He only managed a single practice lap on it at just under 149 km/h before declaring it unsuitable for racing because of the strain on his wrists and shoulders resulting from the lack of a fuel tank to rest his chest on at speed.

Crooks’ thumbs down for the Lowboy, however, didn’t mean it got thrown in the race shop’s garbage can just yet, and at that season’s final Oulton Park race in October, it reappeared in the hands of local rider Keith Terretta. He’d been signed up for 1961 by nearby Manchester dealer Reg Dearden, who worked hand in glove with the Norton race shop. By now, Hele’s device had new handlebar and footrest mountings fitted in an effort to make the rider more comfortable, as well as a wire cage over the cylinder head, complete with pad for the rider to rest his chin on. However, the resultant higher stance gave away part of the wind-cheating aspect, which was further compromised by the adoption of a taller and more conventional fairing, which now had room for the central number plate as dictated by FIM regulations, rather than the numbers displayed on each side of the original bodywork. Had Crooks decided to race it in the Junior TT, he’d have had his forward vision obstructed by having the number plate mounted centrally in order to meet those requirements.

The Lowboy Gets Scrapped 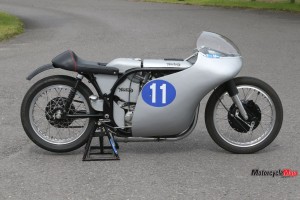 Terretta unfortunately got turfed off in his heat race at Oulton in a coming together with two other riders at Cascades Corner, though not before commenting favourably on the Lowboy’s handling, as well as on the new Amal GP2 carb, by now fitted with extra downdraft thanks to a modified inlet port on the factory cylinder head. But that was the last time the Lowboy appeared in public for another 40 years, and it was indeed junked after Norton’s Bracebridge Street race shop was shut down by AMC in 1961. Fortunately, though, it was rescued from the scrap heap by inveterate special-builder Bob Collier, who’d worked in Norton’s Experimental Department since 1949. A prodigious builder of off-the-wall specials, Collier well understood the advantages of a low build, having created the RGC 350 cc GP single that debuted at the 1953 Belgian GP at Spa, consisting of an AJS 7R engine canted over at 45 degrees to produce an ultra-low wind-cheating device in those pre-streamlining days.

Sadly, though, Collier didn’t have time to revive the Norton Lowboy, which languished in a disassembled state in an unheated shed until 1997, when it was acquired from him by Sammy Miller, who’d become friends with him while working at the Ariel factory, also in Birmingham.

“It was very tired but almost complete, except for the seat, engine cover and the original fairing,” says Miller, who has four of Collier’s own creations in his museum. “Bob Stanley [the Sammy Miller Museum’s mechanical maestro] and I restored it in around four months, but rather than make a replica fairing, we decided to put it on display without any bodywork so people could appreciate the blue-sky thinking behind it.” After Miller rode it at a Mallory Park demo a couple of years later, Dave Latheron at B&J Motorcycles in Lancashire contacted him, saying he’s had the fairing for many years. Miller says they “came to an agreement, refitted the bodywork, and now it’s exactly as Eddie Crooks rode it in TT practice.” 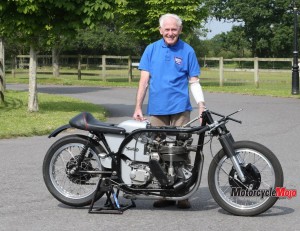 Hele created the Lowboy by removing the standard 24-litre fuel tank from its customary place atop the twin upper frame rails running over the motor, and stretching the Manx featherbed chassis in order to replace it with a 14.75-litre light-alloy tank wholly mounted within the frame, above the four-speed Manx gearbox. This beautifully fabricated example of the tinsmith’s art extends back under the rider’s seat, with a cutaway on the right to give space for the 31 mm Amal GP carb. To make room for this, the swingarm pivot was extended rearward by welding its mounting plates to the rear faces of the frame tubes, thus contributing to extending the wheelbase from the standard Manx’s 1,420 mm to the Lowboy’s 1,485 mm. This also made room for the equally well-fabricated 3.4-litre light-alloy oil tank (vs. 4.5-litre on the standard 40M) to be squeezed into the space behind the gearbox and that swingarm pivot. Thanks to the primary chain getting in the way, its filler cap was draped over the swingarm pivot to exit on the right, rather than on the left, as was commonplace, so as to be on the correct side for pit stops. It was all a masterclass in exploiting every tiniest piece of real estate on the motorcycle.

The fuel tank was further cut away in front on the left to make room for not one but two remote float chambers stacked one above the other. Because…