It’s not really hoarding if everything has a home, is it? 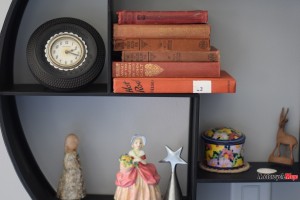 I’m not sure why she hates them so. Perhaps because my abilities with them could best be described as “talented amateur,” as my father used to say, rather than “expert.” Or maybe it’s the smell of oil and gas and old tool boxes (aah, old tool boxes . . .). Or because, as she recently told me, I’m “taking over the whole house” with my stuff, because I had two bike magazines by the fireplace, where I like to sit and read when it’s too cold to ride. But then she pointed out the ones in the kitchen. And beside the bed. And in the living room. It’s going to be a long winter.

I’ve tried organizing all my stuff in the garage and my office, but the stuff keeps sneaking out. It seems that I have too much great stuff for it to be contained. Besides, some of it is really great stuff. Like the ancient tire clock my dad gave me from back in his gas station days. It’s a small-scale General Streamline Jumbo tire (not sure how it can be streamline and jumbo, but whatever) made in Akron, Ohio; it’s got a wind-up New Haven clock in it that still keeps time. Or my clay sculpture of a pot-bellied biker riding an ape-hangered old Harley. Or my poster of the “Dodge fever” ad for the 1969 Polara, my first real car. “Totally new, it is. Expensive, it isn’t.” Unmitigated poetry.

I could go on, but you get the idea. So, I’m trying to clear out some of my stuff to keep her happy. I threw out some of my hubcap collection. But not the good ones – I still have a single wheel trim set from a C3 Corvette project I sold 12 years ago. It could come in handy one day. Then I kinda got stuck and that’s as far as I got. I really don’t have anything else that I can throw out. It’s all really good stuff, like the small collection of gauges that I’ll never use, but who wouldn’t want to look at old gauges? They don’t make ’em like they used to. And some of them belonged to my grandfather. And what about those classic British motorcycle magazines from 20 years ago? Who knows when you might need one of those? I mean, they’re all the way from England, for Pete’s sake! And I’ve got nuts and bolts that go back to before I was born that smell . . . like happiness.

But, a happy wife makes for a happy life. So I sit and look at my stuff, and think. And then I get distracted and start playing with something, or reading an old magazine or book – ooh, the pretty pictures! – and my resolve goes right out the window.
It really is great stuff.