I wasn’t looking for love when I rode up into Idaho’s Sawtooth Mountain Range last summer. I wasn’t looking for late night s’mores, the perfect campsite or the clearest night skies I can remember. And I definitely wasn’t fantasizing about making new friends or creating lasting memories. I had absolutely no clue I was about to become enchanted by a green splash on the map I’d intended to ride straight through, or that I would end up spending almost a week traversing it instead of a single afternoon.

But that’s exactly what happened when I rode up out of the heat of southern Idaho’s monotonous plains and into the majestic Sawtooth National Forest. I’d been on my way north to revisit what I believed at the time to be Idaho’s best motorcycle ride, the 450 km International Selkirk Loop, which encircles the Selkirk Mountains shared by northern Idaho and Alberta. I didn’t make it that far. 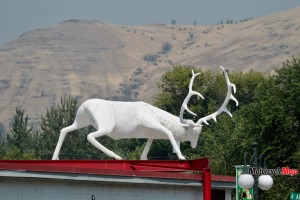 The love affair began with pure drama. I’d just departed the sparkly ski town of Sun Valley on U.S. 75, feeling dusty and half-delirious from riding for a couple of days in intense Nevada heat, when a massive thunderhead trundled across the sky ahead of me. As I rode closer to the deafening rumble, the road began to tighten and twist as it scrambled up into steep mountains now darkened by the storm. And then the rain met me, hard and cleansing and smelling of cooled heat and life. I was so intoxicated by the sudden thrill and force of this energy, my breath caught and eyes stung with tears.

And then suddenly I shot out the other side of the thick, dark curtain of rain and found myself riding through shafts of sunlight and steam as thick as smoke rising from the shimmering road. I stopped at a pullout just over Galena Summit to catch my breath and gaze down into a long, grassy-green valley fringed by mountains as steep and jagged as shark’s teeth. Or the teeth of a saw. The Sawtooth Range. Aah.

You’d think that moment was the pinnacle of my Sawtooth experience, but no, it was only the very beginning of a very long, slow and extremely satisfying stopover.

I was so jarred by the beauty of this river valley and its surrounding mountains I decided to slow down and explore a bit, taking side roads here and there, making notes about which of the many cabins and campgrounds seemed coolest, but never considering a spontaneous stay, because the only thing more obvious than this area’s beauty was its popularity, especially on a midsummer weekend. 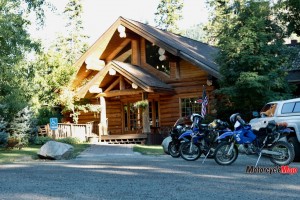 I parked the bike and took off my helmet at the tent-only Alturas Lake campground just to have a peek at the lake and use the loo. As an afterthought, I decided to walk the small trail that loops through the campground. As I was walking past one of the occupied sites, averting my eyes as the best of us do, I heard a voice ask, “Are you looking for a campsite?”

I looked over to see a cheerful couple draped in camp chairs and smiling brightly at me despite my unseemly full-gear appearance. They explained that a big family had prematurely departed from the campsite in the woods beyond their own, because their kids had been unmanageable. “They decided to pack it in,” they told me, and I could tell from their smiles they were super happy these kids had been cleared out. “We’re riders,” they said. “When we heard the motorcycle pull in, we both agreed a biker would be a nice neighbour.” And then, as if I needed encouragement, they added, “And it’s already been paid for.”

And just like that, I had an ideal lakeside campsite, just the right amount of trees away from fun fellow riders Teresa and Kelly Shively of nearby Boise, Idaho, who, in addition to clueing me in about the vacant tent site, yielded the inside story about the area’s history and secrets, including its best motorcycle roads.

Solace Among the Saw’s Teeth 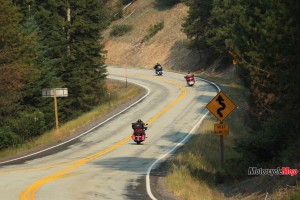 There are times when you’re travelling by motorcycle when you don’t know you’re dog-tired until you slow down. I’d been on the bike for weeks by the time I rode into Idaho, and while my mind had been enlivened by the journey, my body was spent. Over the next few days, I discovered an array of kinks and sore corners and sorted them out; I hiked and swam and ate and rode around each afternoon with a huge smile on my face.

With my tent and other camping gear off the back seat of the Indian Roadmaster I was testing, there was now plenty of room to bungee on the neon green raft I bought in town. I took the raft to all the lakes in the area and launched it from every beach, including one night floating on Redfish Lake, the terminus of the longest Pacific sockeye salmon migration in North America, until my teeth began to chatter. The entire Sawtooth Range is within the Central Idaho Dark Sky Reserve, one of the largest areas of protected natural nighttime darkness left in the U.S., and the intensity of the stars in the night sky is mind-bending.

When I needed sustenance, I headed to Stanley, a quirky little adventure launch pad with a smattering of restaurants. My favourite meals of the day are breakfast and ice cream, and this town had my needs met between the Stanley Baking Company and Stanley Scoops. I enjoyed dinners at both the Sawtooth Hotel on Ace of Diamonds Street and the Mountain Village Restaurant at the junction of Highways 75 and 21, with the former being my foremost recommendation.
Although I did take Hwy 75 back up and over twisty Galena Summit a few more times during my stay, this area between Sun Valley and Stanley is more of a downtime destination than a motorcycle playground. The motorcycle shenanigan portion of this Idaho experience was waiting a half-day north.

Before heading back to Boise, my virtuous camp mates Teresa and Kelly shared their favourite local motorcycle road with me: Lolo Pass, aka U.S. 12. I’d not heard of it, so when I finally grew antsy from all the repose, I packed up and chased the lively Salmon River north for a few hours on U.S. 75 and then U.S. 93 until I reached the town of Lolo, Montana, and the deceptively bland start to what is truly one of the world’s greatest motorcycle roads.

It was already late afternoon when I turned west and ripped right up and over the Lolo Summit, sun in my eyes so blinding I thought I’d passed a sign that said “Winding road next 99 miles.” That, of course, seemed too good to be true, so I turned the Roadmaster around to double-check. The sign had indeed promised 99 more miles of corners, and my map showed nothing but wilderness, so I decided to double back and top off my gas.

This led me down a twisty side road to the Lochsa Lodge, a shady Eden dotted with cute cabins. I queued up for fuel with a biker club that had just ridden the highway from the east, their good spirits and bright laughter rising up through the forest like tinkling bells. They said I would have a great time on the road, but advised I find a place nearby to overnight and begin again in the morning, as I was sure to lose the light and deer were plenty. I looked around at the cute cabins and knew they would all be booked, and retreating to brick-and-mortar Lolo didn’t feel like an option either. And then I heard a voice say, “Are you looking for a campsite?”

And so, for the second time in a week, I was invited to pitch my tent in an ideal spot free of charge, this time by the sympathetic owner of the booked-solid Lochsa Lodge. And while my grassy patch wasn’t overlooking a pristine lake, it was only a few steps from a terrific bar and restaurant and included usage of fancy showers and washrooms.

I’d been six days in Idaho by now and was feeling remarkably untroubled. As if I could stay forever. I’d met only friendly, generous people here. I’d rested in the cool shadows of towering mountains; ridden beautiful, uncrowded highways; floated daily on lakes as crystal clear as Idaho’s night sky. And to wrap it all up, I woke up on my last day high in the mountains with nothing planned but riding 160 km of river-tracing corners.

Wouldn’t you agree that the best motorcycle experiences are most often those unplanned? As with love, you can simply be riding along, minding your business when it hits you. Suddenly a place can feel indispensable, like an essential part of your life you previously
didn’t know was missing. Like home. Or a hand you just don’t want to stop holding.

Money won’t buy you love, and midsummer, it might not even buy you lodging, but it will get you on a motorcycle, and if you point your bike in the right direction, your heart is sure to follow.