After dodging chaotic traffic in Lima, it didn’t take long for this pair of travellers to head for the mountains, literally

I squinted in disbelief. On a grinding wheel of terror, a whole city’s worth of boneheadedness came crashing down like a shelf full of shoes, all around my head at once. Welcome to Lima.

Dodging demolishment by the skin of my teeth was one thing in this black-souled and brazen traffic, but glimpsing a severely injured motorcyclist in an ambulance made my soul cold. Lima’s wrath will sweep you from the road like a bit of goose down in the wind if you’re not careful. Breaking out of a thick knot of cars, I rode Pearl, my F650GS, with the agility and speed of a frightened rat fleeing a rising flood. Barely retaining a grip on the Kamikaze traffic – what did I expect when Peruvians are not required to take a driving test? – the stronghold on my sanity weakened. With the utmost dispatch, we fled to the Pan American’s sandblasted highway toward the Ancash region in the north.

Leaving the Mayhem Behind 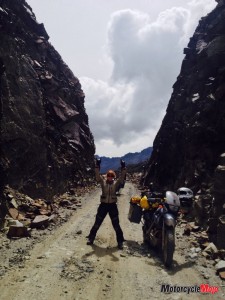 Skirting around the headland, we lapped up the calm coastal views of the Pacific on our left, giant dunes on our right. Life became quiet again. The birds of prey flirted with the ragged edge of the bluff, diving close, hovering on the updrafts, then canting their wings to soar away. The sun shone above the horizon where a gentle band of blue arced across the world – melting into the spaces between the mountains. Tension trickled from my body, leaving me feeling as light as a dandelion seed. Into that peace I rode.

Plains collided with indigo peaks on the hilly road to Huaraz, nestled in a grass-green valley. This is the gateway to the Cordillera Blanca, the highest tropical mountain range in the world. Something told me its 6,000-metre summits wouldn’t let me forget this region for a second. Huascarán National Park, packed full of Andean leviathans, encompasses most of the Cordillera Blanca above 4,000 metres. Jason and I were about to experience a place that’s home to around 600 glaciers, endangered plant species and the poised Andean condor.

Our route to peaking the enigmatic utopia involved a rocky ride first to Yanama, a tiny mountain-enveloped pueblo. Advised beforehand by a friend that the gnarly track was a little rough to begin with, I made a mental note to brace my backside. As soon as we started to climb and I turned the first corner, I stopped. Abruptly. Pearl’s nose faced down and dug into soft earth, filled me with fear. Self-doubt gnawed at my ribs as I careened precariously on loamy soil. I was a hair’s breadth from losing control, and we’d only just started.

My muscles tightened when an understanding dawned. This wouldn’t be a rugged patch to negotiate at the outset, this would be “fun” all the way to the top. But something overrode my worry, and my brain quickly rewired. Whatever it was allowed my soul to connect with Pearl’s. We must’ve communed, because a door opened in my head and out flowed the anxiety. An influx of adrenaline propelled me along the narrow dirt trail – peppered with potholes, scored with ruts and packed with loose stones and biggish rocks. I started to get my ride on.

“Lisa, just keep doing what you’re doing. Although I’d be much happier if you stuck to the left,” Jason deferentially added from behind. Fair enough – those precipices on my right were pretty sheer. They made Bolivia’s Road of Death look like a day at the beach. Part way to the top, Jason inquired, “Are you enjoying yourself, Lisa?”

“Good, because you’re riding like a pro today. I’m impressed.” Jason had said that to me only a handful of times in the last 12 months. I was ecstatic and fed off his compliment like a hungry pup. I think I dined out on it for a couple of days, because for once, my off-road riding ability remained consistently good. 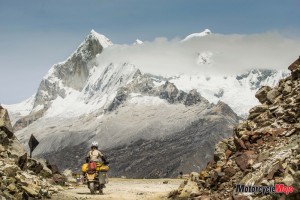 At altitude, the sun was in high-broiling ascendancy. The exertion from off-roading had spread over my limbs in a thick sheen of sweat. No matter, every which way I threw my gaze, ancient mountains rose to scallop the sky with humps of white. Contouring a staggering landscape, I felt ant-sized.

Upon reaching Yanama for the night, I was in a state of pure and incredulous joy. I’d made it and somehow kept Pearl upright, albeit bungling us through on a wing and a prayer. No passing gringos were present, only local children who shrilled happily in the plaza while their parents tended to their herds, or tiendas. Stable doors half opened admitted the breeze. Dogs barked happily in accompaniment and falcons wheeled on the warm air currents. We’d entered the back door to a time-honoured Peruvian life. Images danced on the back of my lids, flickering as I sunk like a stone into a deep sleep.

Night greyed into the lilac canvas of predawn, softly illuminating the hilltop villages on rolling swells of land. I awoke just as the first light stole into the world, and I squirmed to get the kink out of my back. I yawned—a jaw-stretching, tired yawn. Chickens pecked at their corn and piglets squealed in the hostel’s enclosure. I watched a splinter of sun peek over the horizon, and the mountains revealed themselves with an unfathomably icy blue presence. 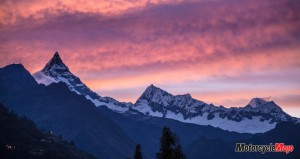 Up and up we bounced over more craggy terrain. Mid-morning, we had scaled a slender backbone of ridge and rode between two ragged shards of mountain. Ice-capped glaciers rimmed the vista, their spiny points raking the bottom of the clouds. Hundreds of natural drainage channels zigzagged through a white maze of ridges. I sneaked toward the edge to get a closer look. The route had left me drained of vitality, but filled with a silence so profound it felt downy against my soul. “A-maz-ing!” slowly oozed from my lips as I gazed with utter gravity, my head panning the grandeur.

Descending the less gnarly switchbacks on the other side of the ridge, we passed the odd minibus, leaving us in a choking curtain of dust, rattling Pearl and me before it disappeared and formed a dust devil whirling off into the sky. I kept my eyes on the stony ruts. I still had a ways to go.

Out of the Clouds

Our wheels back on the national park’s bottom, massive faces of rock loomed above us – an impressive backdrop to a jade-green lake fed by a glacial blue ribbon of water running down from above. A couple of ducks came and went, passing a cow half submerged, chewing on the lake’s grasses. Hunger came on like a charging bull through my stomach.

My belly whined with gratitude over a late lunch in the town of Yungay and begged for more. By the time we’d finished chowing down, satisfaction permeated my body, trickling strength into my limbs. Another mountain-swathed village called Sucre took us in for the night. With a weak-wristed action, I parked Pearl for the evening. Exhausted from head to toe, I stood under a tepid shower; the water soothed me like cool salve on an aching burn.

Alas, the lively ride at a rather lofty altitude had taken its toll, but that mattered little, and even less in what felt like a distinctly different part of Peru. It was going to be hard to leave this little enclave. I sat quietly staring out across the plaza – the place, its people, the simplicity and location not lost on me.