Some of the members of my Jewish motorcycle club, the YOW (Yidden on Wheels), from Toronto decided to honour Israel’s special 70th birthday (Yom Ha’atzmaut) by touring the whole country for two weeks this past April. The preparation took over a year, but the results were incredible. In fact, we just proved an exception to the riders’ motto “It’s not the destination but the ride,” because this special trip was both.

The logistics of getting 14 big touring bikes halfway across the world was daunting, to say the least. We needed a customs broker, a shipping company, an insurance broker and, most importantly, proper documentation for everything. As an example, one of our riders had a new bike but the paperwork had one small mistake, resulting in a four-hour delay at the Israeli customs office in Haifa.

We shipped our bikes one month in advance by cargo ship and our group arrived by air on April 9, 2018. We reunited with our “babies” the following day. In addition to our riding club, we had four Aussies (who also shipped their bikes), one American and our local Israeli leader who acted as our tour guide. We had a large bus for those people who were not riders, like my wife, Judy, or wanted a break from being on the bikes. The bus also carried our extra luggage. Our group in total had over 40 people. 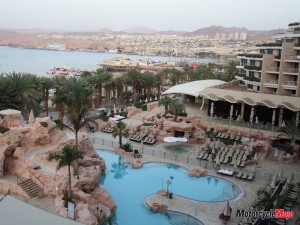 The trip was designed to celebrate three milestones in Israel’s young history: Holocaust Remembrance Day on April 12, Israeli Soldiers Memorial Day on April 18 and Israel’s Independence Day on April 19. For me, this trip had a lot of meaning. Foremost, I am thankful because, being a 76-year-old Holocaust survivor, I was blessed with the ability to be riding my Gold Wing in Israel, the land of my ancestors. I was also happy with some of the challenging roads we travelled on.

I give presentations about the Holocaust in the Greater Toronto area throughout the whole year, especially during Holocaust Education Week every November. In each presentation I state that for me, a motorcycle represents the greatest symbol of freedom. I can’t describe my feeling of pride when I was interviewed for Israeli television (see interview here –
goo.gl/oqLtQA) on top of Masada, which in Israel is the symbol of struggle for freedom against oppression. Masada is an ancient Roman fortress, a National Park and a UNESCO World Heritage site located in the Judean Desert near the shores of the Dead Sea. Masada was only one of our destinations, but to me it was the most meaningful.

The Riding Is Different

Israel is a small country and our entire trip covered just over 2,000 km, but the experiences both on the road and at the different sites we visited were incredible. After we picked up our bikes, we headed north to the Golan Heights on the border with Syria. With 20 bikes in the group, we quickly found out that riding in Israel is not the same as in Canada or the United States. The locals tend to be a bit more aggressive than I’m accustomed to and there are a lot of scooters cutting in and out of traffic. However, other than a couple of minor drops in gravel parking lots (mostly by yours truly), we did not have any mishaps or experienced any mechanical problems.

When we arrived at the Golan on the narrow road that separates the two countries, we saw a UN observer that is posted there, as well as several sculptures created from the remnants of the war in 1967. We spent the night at the foot of the Golan on a kibbutz, which had a very good hotel. 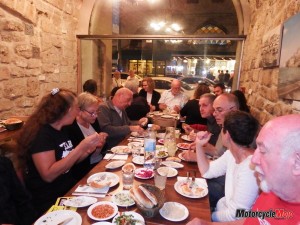 After the Golan, we headed to Jerusalem, and on this leg of the trip I witnessed a very moving and emotional experience. At exactly noon on April 12, the entire country stopped for two minutes of silence to remember the victims of the Holocaust. We were at a roadside rest stop, and we saw cars and trucks in both directions pull off the road; the drivers then got out and stood in silence.

The trip to Jerusalem was 350 km and had some pretty good switchbacks, twisties and steep descents. We spent three nights there, during which time we visited the Western Wall and Ammunition Hill, which was the site of some very heavy fighting in 1967; we were also treated to a spectacular light show at the Tower of David, which depicts the story of Jerusalem.

Our trip was designed to cover as much ground as possible on our bikes – in other words, “just ride, baby, ride.” Over the last dozen years I’ve ridden all over the United States and Canada, and I will say the roads in the Judean Hills just outside Jerusalem equalled any that I’ve experienced before, including the renowned Tail of the Dragon. 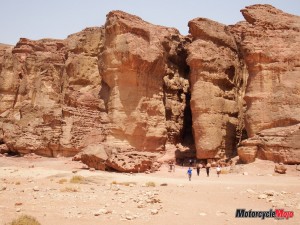 It was really interesting that from the Judean Hills we descended into the Judean Desert and rode into 41 C heat. We were on our way to the Ein Gedi, an oasis and nature reserve located on the shores of the Dead Sea, which at 400 metres below sea level is the lowest point on dry land. To see the desert and sheer rocks with a natural spring cascading down from it is truly a breathtaking sight.

Our next destination was Masada, which we reached by cable car after we left our bikes in the parking lot far below the palace. A large Israeli flag flew on top and the view overlooking the Dead Sea was beautiful.

We spent the following two nights at a nearby resort on the Dead Sea. The hotel parking lot was not biker-friendly, as it was at the back of the hotel with a steep hill and a tall curb. I did negotiate the curb, but because I had to speed up to get over it, I almost hit the retaining wall. When my friend Danny saw this, he offered to park my bike whenever I felt a bit unsure (yes, I was the oldest in the group). After this, I took him up on his kind offer three times and, according to my less than charitable friends, I became the first in our club to enjoy valet service for a bike.

The next destination was Eilat, on the shores of the Red Sea, which we used as a home base: from where we had one-day rides, returning nightly. We rode out to Timna Park, another nature park, where we visited Solomon’s Pillars. Every trip includes some interesting events or out-of-the-ordinary episodes, but birdwatching? Are you kidding me? It was no joke, but a fascinating experience. Eilat is located at a land bridge between Eurasia and Africa, and millions of birds visit there after their epic crossing of the vast Sahara desert, having flown thousands of kilometres without food or water. While in Eilat, we commemorated the Israeli Soldiers Memorial Day on April 18 and Israel’s Independence Day the following day.

On April 20, we left for Tel Aviv, and did some hard riding through the Negev Desert in the high heat. Knowing that the trip was winding down, I was already feeling sad. I wanted to ride more because I knew that our bikes would not be back in Canada for some time. (In fact, the bikes ended up being held at customs for an extra 10 days, and we didn’t get them back until June.)

Nevertheless, the last night in Tel Aviv was special. We had a big feast and reminisced about our experiences. The following day, we rode the bikes to Haifa and loaded them back into the same containers that were used to get them to Israel. For some people, it was the end of the trip. For Judy and I it was only the first leg, as we continued to Greece, Holland, Austria and Hungary to visit friends and family.

The ride was over, but what a ride it was – it really was the ride of a lifetime.