Basking in the friendliness of the people, the history and the amazing scenery that Croatia has to offer

Croatia has become the hidden gem of Europe for many reasons. The small country, which borders the Adriatic Sea, is often overlooked by travellers headed to the more common destinations of Italy or even Greece. Although it has mostly recovered from the Croatian War of Independence, which was won in 1995, there are still remnants of the battle, evident from bullet-ridden bricks and vacated buildings throughout the country. Despite the battle scars, however, Croatia has risen above as a hearty, proud and humble country, eager to welcome visitors to take in the beautiful landscape and enjoy all that it has to offer. 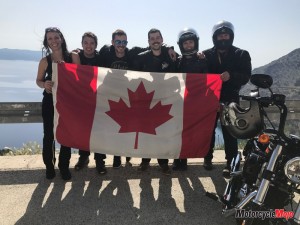 An invitation to ride was all I needed to venture to Europe. Before I knew it, I was boarding a plane from Toronto with my carefully packed bags that were bulging at the seams. The essentials were all there: bathing suit, sundress, leather riding jacket, helmet (two actually), boots, gloves and a few pairs of jeans. I was only going to be in Croatia for only a few days, so I was going to make the most of every day and take in as many experiences as I possibly could. (I took this trip in late April, which was the perfect time to visit. The weather was amazing, and the city of Split wasn’t too busy with tourists quite yet.)

I often find there’s a reason we seek travel, whether we are trying to get away from work, find ourselves, spend time with family or simply get our adrenaline fix. For me, this ended up being more than just another moto adventure (doesn’t it always, though?). It was filled with new friendships, and a better understanding of my own background and heritage. It’s interesting how, over time, the things we do lead us down this wild and crazy path; I like to think of it as a road full of fun and twisty switchbacks, to the ultimate destination of learning more about ourselves. When you think of it, how many of us have “found ourselves” on a motorcycle, or “lost ourselves” to the wide open road? If you raised your hand, or grinned a bit, then you’re still with me, and you get it. 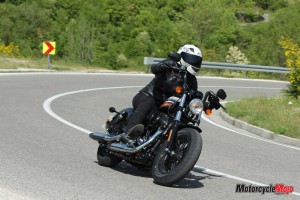 On our way from the airport to Le Méridien hotel in Split, I mentioned to our shuttle driver that my family from generations back was originally from Slovakia (formerly the Czech Republic). It turns out that we were just a short eight hours away from my great-
grandparents’ birthplace. The driver smiled pleasantly and told me how the Slovak people were the first to start coming back to visit Croatia after the war. With my heart warmed, and a reminder to tell my 86-year-old grandma about this, I promised myself I would return again to visit my great-grandparents’ hometown, on a motorcycle of course.

Our adventure consisted of two days of riding through the Croatian mountains and down through the countryside and coastline surrounding Split, the
second-largest city in Croatia. As a bunch of Canadians on Harley-Davidsons, we were a bit out of our element. Yet, despite being over 7,000 km
from home, we felt strangely comfortable in a completely unfamiliar place. Perhaps it was the homemade food (usually served family style), the warm hospitality or the rustic and simple way of life that we seemed to enjoy. Either way, I felt at home, and the trip had just begun. 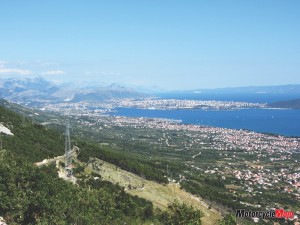 With a twist of the throttle on a 2018 Harley-Davidson Street Glide, the Milwaukee-Eight V-twin engine on this beast roared to life as we set off on our first day of riding through the mountainside. In search of some fun riding, we made sure to head for the hills, literally. The highest mountain peak in the country is Dinara, and we found it just east of Knin and the Croatian border with Bosnia and Herzegovina.

While these mountains are smaller than those in other European countries, at over 1,831 metres high, Dinara certainly tested this flat-land girl from Ontario. Incredibly tight switchbacks, a herd of wild goats and varying degrees of incline and decline throughout the mountain landscape encouraged me to focus intently and manoeuvre the Street Glide carefully.

The ride was mixed with slippery hairpins and wide open roads through orchards (where I could really test out the throttle response on that bike), along with cobblestone streets through small towns. However, the somewhat challenging terrain was worth the end result, with epic views of the sea and the islands from high above.

Our final stop of the day at Hotel Panorama in Šibenik offered the most incredible views of the crystal-blue Krka River and the Krka Bridge that spans 391 metres long. This is definitely a must-stop place – the hotel also features a restaurant with a patio overlooking the Krka Canyon. From there we enjoyed a fairly easy ride back to our hotel, where we traded leathers for Lycra as a bunch of bikers in bathing suits relaxing by the infinity pool chatting about the day’s adventure.
A solid night’s sleep had us up early and ready to ride again.

I swapped the Street Glide for a 2018 Harley-Davidson Iron 1200, and opted for a shorter half-day ride along the Dalmatian Coast. Just as riding down Highway 1 in California is a bucket-list item, so is a ride along the edge of the Adriatic Sea. Perhaps it has to do with being in a foreign country or the fresh smell of the sea; either way, it’s exhilarating to the point of giving you goose bumps or plastering a huge smile on your face.

I focused on the road, but found it impossible not to take in some of the beautiful views ahead of me and of the sea to my right. The islands off in the distance toward Italy were calling out to me for an island-hopping adventure, but that would have to be next time. We cruised along and made sure to stop at one of the many cafés located along the beach. Caffe Bar Malo Mista, in Dugi Rat, was our coffee stop of choice given the amazing view of the coastline. Nothing beats sipping European coffee after cruising along the Adriatic Sea on a motorcycle. This was the ultimate high.

I enjoyed riding the Iron 1200 along the seaside, and then into the countryside. The mid-centred controls made me feel as if I was riding a sport bike, and I could really get into some corners as we rode along. The fresh ocean air invigorated me that day, and I felt more alive than I had ever felt. I found myself on those roads in Croatia, on a Harley-Davidson, and the experience is one I hope to repeat soon. Being that far from home never felt more comfortable and familiar than it did in Croatia.