It’s as much about building friendships as it is about tough competition.

Nestled in the interior of British Columbia rests the Okanagan Valley, and as September came to a close, you could find a gathering of a special kind of people. The kind that bleeds adventure, the kind willing to sacrifice their bikes and bodies in search of an adrenalin rush and a great challenge. This gathering was the second annual KTM Adventure Rally Canada 2018, held September 26–30, with riders from Canada and the United States taking part in the events throughout the week. Riders started to arrive as early as Monday to take part in the skills clinics put on by extreme enduro champion Chris Birch and to try out some of the new Austrian machinery at the KTM demo rides before the rally routes started on Thursday. I had packed my things on my street bike in Revelstoke, B.C., and headed two hours southwest to SilverStar Mountain Resort for the rally.

The KTM Adventure Rally happens in six different countries – Italy, Australia, New Zealand, South Africa, United States and Canada – and is created to bring riders with all makes of adventure bikes over 600 cc together for a weekend of challenging riding and meeting other like-minded folks.

There were initially three routes for riders to attempt while at the KTM Adventure Rally: R1 – the hardest of the off-road adventure routes, encompassing three days and 1,000 km; R2 – a two-day, 900 km, medium-difficulty adventure-touring route of trails and gravel; and the S route – a two-day, 1,200 km mostly paved route. However, it is an adventure rally, and before it even got started, it was determined the S course be cancelled due to the lack of entries. For the super-competitive riders, there’s also the Ultimate Race, which takes place each morning before the R1 route (see “The Ultimate Goal,” p. 54.)

Teams of two to four riders would navigate through the routes using GPS. Riders participating in the R1 course would ride Thursday, Friday and Saturday, while those opting for the R2 would start on the Friday. If riders rode the R1 course on Thursday and decided it was too difficult, they could then drop into the R2. 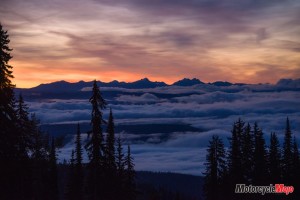 As the sun struggled to break through the heavy mist, riders filtered into the starting area early Thursday morning. Everyone waited patiently to take off from the start line to see what the day would hold for us. However, there were a few surprises throughout the route. Steep, loose, rocky trails put riders and their machines to the test, forcing some to turn around and ride the more manageable R2 route for the next two days. I had opted for an easier route the first day and rode with another female competitor. I was fortunate to be riding one of KTM’s 690 Enduro Rs, but nervous enough on this new-to-me bike to not play too rough with it the first day.

As the day came to a close and the sun sank behind the mountains, riders spoke of the day’s ride – it was tough. That was not to be debated.

Almost half the riders originally in the R1 course dropped into the R2. Many teams scrambled to create new teams based on the intense level of riding that was promised for the next two days. I had decided I’d like to see what the fuss was about on the R1 route, so I started searching for a partner to attempt it with. I met Calvin, who had split ways with his riding partner because they had different competitive goals, and as we chatted, we decided we would make a good team for the next day. 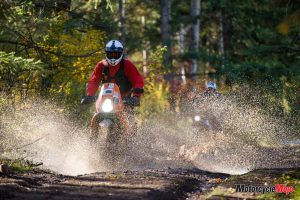 The mist hung above the valley as riders waited in the frigid air to attempt the R1 and R2 courses on Friday. Calvin and I took off down the weaving roads that lead us into the valley. We made our way into an expansive trail system that had been carefully planned out to offer plenty of technical riding and lead to breathtaking viewpoints. It was a tough enough task riding through overgrown brush and single track strewn with logs and rocks, but doing so while trying to navigate with your GPS made it near impossible. As we made our way through the thick web of trails and cow paths, we had gotten into what would be the crux of this day’s course – a kilometre-long hill climb of loose, rutted single track winding up through the forest.

Things that are worthwhile often don’t come easy, and this was no exception. As I attempted to make it up the steepest and roughest section, my front wheel washed out, and just like that I was down. I pulled my bike off the trail as more riders came up the hill behind me. The carnage had begun. Within a minute there were nine of us scattered on the hillside. One by one we pulled and pushed every bike – from the lighter 690 to the heavyweight bikes like the 1290 – up the hill. It was no longer about getting ahead, it was about getting everybody out. I understood now why there were so few people continuing on this course after the first day. Showing the true colours of the participants, it’s not about getting to the end in good time, but rather having a good time and building camaraderie with everyone as they attempt to just get to the end. 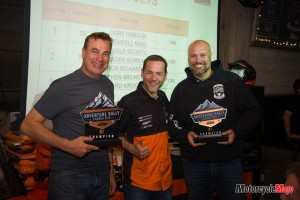 Once everyone was up the loose, rutted slope and mildly rested, we continued up the extensive hill. Then disaster struck! Calvin’s clutch blew; we were stuck on the last section of the hill and his bike was missing an important part of its driveline. After some discussion, we decided that it’d be best if he coasted back down the merciless slope. The one we had struggled so hard to achieve – the hardest part of the day – only to turn around and not finish.

We weren’t alone. Defeated by the hill was another group that also had a mechanical issue. Calvin and I rode down with John and Jason, towing the disabled bikes with the working bikes through the flat sections of dirt road. We made it to the road, where we then waited to get a tow back to SilverStar. As we sat watching other riders finish the course, we reminded ourselves that…