BMW introduces a more competent adventure bike for a wider range of riders.

I was in Colorado, anxiously waiting to throw a leg over the new F850GS and F750GS. It’s been a long wait to see what BMW would bring to the table as the successors of the 700GS and 800GS, which first debuted in 2007. With the F800GS making ground within the middleweight class, it was difficult to conceive what BMW may have planned next. But with an all-new engine, transmission and frame, it became clear that this new generation of middleweight GSs would create a shake-up in the adventure-touring market.

For me, there’s always been a bit of a Goldilocks conundrum when it comes to adventure bikes: everything was too big or too small, too tall or too sluggish. To give you an idea of why, I’ll tell you a bit about myself. At five feet five inches and weighing 120 pounds, it’s hard to find a bike that I feel comfortable on; I’ve grown accustomed to not properly touching the ground on many bikes.

I’ve ridden dirt bikes most of my life and put many kilometres on street bikes, and I want an adventure bike that can take me through single track and travel the world. I was interested to see what would come from riding the F850. As Goldilocks would wonder: Would the bike be too cold, too warm . . . or just right?

Good for Any Season 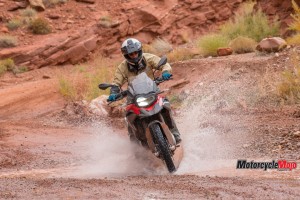 I was lucky enough to be on a test ride that unintentionally encountered all four seasons throughout the day – from a brisk autumn morning riding through canyons on red sand and primitive rock among towering mesas to riding up mountains into snow and 0 C, then descending into wet roads that twisted like a knot hugging the mountainside as the sun offered a tiny bit of warmth. Although the conditions didn’t allow us to enjoy every corner, they did give us a good chance to see how well the brakes work in harsh weather. Both models are equipped with standard BMW ABS – dual discs in the front and single disc in the rear. Through a number of ride modes, you have the ability to adjust the ABS to different degrees of aggressiveness as well as Dynamic Traction Control (DTC) and suspension, if the bike is equipped with BMW’s Electronic Suspension Adjustment (ESA).

Although the fork on the base F850 offers no adjustment, the progressive damping was plush through small potholes and rocks, while stiffening when impacting at higher speeds and over obstacles. For a smaller rider, I found the fork quite responsive, although stiff on very hard impacts or preloading my suspension to pop over obstacles. Overall, throughout a diverse group of riders, everyone was pleased with the stable-feeling fork. Well-balanced compression and rebound absorbed the energy that would otherwise tire the rider’s arms.

The rear suspension is fully adjustable and can be electronically adjusted while riding with the Dynamic ESA and preload adjustment. This feature and many others are available with the Select package, which is a $2,810 increase over the base price. Aside from the impressive suspension, the F850 has a whopping 249 mm ground clearance, far more than its predecessor, which sits at 216 mm. 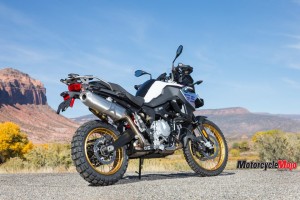 Further trumping the F800, the F850GS seat height is 18 mm lower, offering a more comfortable and ergonomic ride, especially for shorter riders. The F850 seat sits at 861 mm, and if that isn’t suitable, you have the option of four different seat heights at the time of purchase to accommodate your needs. Options range from the accessory rally seat (additional cost) at 889 mm to the lowest seat at 835 mm; you also have the option of the factory-lowered suspension kit, which sets the seat at the same height as the F750GS. BMW has done a great job of offering a range of seat heights to benefit the wide-ranging rider market this bike will appeal to.

I found the stock seat was manageable but tall, just being able to touch a toe on the ground. A rider of my size looking for more comfort would want to get the shorter seat. Although the seat is narrower than the previous generation, I thought it was still slightly wide while standing.

I also noticed that the shifter lever and rear brake pedal were placed quite low below the foot peg; even with adjustment, I found the lever tight for shifting with off-road boots on. One thing that helped was taking the rubber inserts out of the foot pegs, leaving a serrated, metal foot peg, lowering the feet and giving better boot-to-peg grip. Even with this, the bike is so accommodating to the rider that at no point did I find this a hindrance. 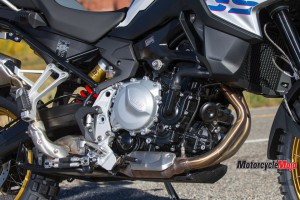 The new steel bridge frame cradles the heart of the beast – the feisty, compact 853 cc engine. This incredible new parallel-twin engine has an output of 90 hp on the F850, offering undeniable power through aggressive terrain and maintaining a sporty feel on the street. I noticed immediately the smoothness of the engine as it produced its distinct sound. The engineers achieved this flawless balance with a pair of opposed counterbalanced shafts and a 90-degree crankshaft journal offset with a firing interval of 270/450 degrees.

The entire transmission has also been re-engineered for the F850GS and F750GS, with the primary drive arranged on the right-hand side. The freshly designed six-speed gearbox now transfers torque to the secondary drive on the left (formally on the right). A self-amplifying slipper clutch maintains an easy squeeze on the clutch lever, appreciably reducing hand fatigue. BMW also offers Gear Shift Assist Pro as an additional option, which lets you shift effortlessly without the clutch. It feels unnatural using shift assist, but is so valuable when situations arise quickly. The gear ratio has also been redesigned with a shorter first gear for technical slow riding, while contributing to more efficient fuel consumption.

Gear Shift Assist Pro is offered in the Select package, which also includes Dynamic ESA, cruise control, larger luggage rack, prep for connectivity with GPS, and DTC and ABS Pro modes (Enduro Pro and Dynamic Mode). These additional modes allow your ABS and DTC to be user-defined for the level of intervention depending on available traction.

The Premium package costs $4,220; this includes all the features of the Select package along with many extras, such as keyless ride, tire pressure monitor, centre stand and a powerful…