An exceptional finished product for a first-time build

In a moment of weakness, Dale Marchand hit the “bid” button on an eBay auction for a pallet of parts, including a 1957 Harley-Davidson Panhead engine, transmission and springer fork, together with a 1974 Paughco frame, some hubs and rims and a handful of other odds and ends.

“I was at my cousin’s stag party and it was three or 4 o’clock in the morning when my friend Mark Schultz sent me a link to the eBay auction,” says Marchand. “It looked like a bike that had been built up in the 1970s and then torn apart quite a few years later, but I ended up buying it out of Virginia and had a pallet of parts shipped to me.”

There’s a First Time for Everything 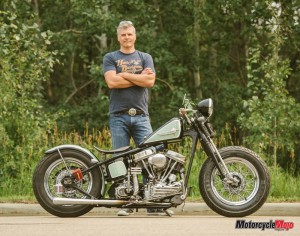 No stranger to motorcycles, Marchand says he’s put his share of kilometres on bikes, both in the dirt on a number of different off-road machines and on the street aboard a 1979 Honda Gold Wing and a 2009 Harley-Davidson Street Glide. Before buying the Panhead project, however, he’d never built a custom – and it changed his life’s direction – just not in the way one might anticipate (we’ll get to that in a bit).

Growing up in Fort McMurray, Alta., Marchand worked first in a tire shop and then in a heavy-transport company. At the latter job, he did a lot of fabricating and repaired a wide variety of equipment. As he says, in that industry, if you’re not trucking, then you’re fixing something. It’s also where he became a proficient welder using both TIG and torch equipment.

As mentioned, it was Marchand’s friend Mark Schultz who pointed out the eBay listing. Schultz is, according to Marchand, a biker and a builder. Because Marchand has done some welding for Schultz, he was spurred on by the builder to create his own custom motorcycle.

“Once I had the pallet of parts, Mark was more than generous with his time to help me go through the items, piece by piece, so I’d have a better idea of what all I had,” Marchand says.

Included were old Harley-Davidson star hubs and some rims, but there were no brakes, linkages, fender, gas tank, headlight, handlebars, foot controls or distributor. There was an oil tank, but it was in rough shape. To start, Marchand wanted to make sure he had good bones for the basis of his build. He bead-blasted the rigid Paughco frame and inspected it for integrity. It was given a clean bill of health, and Marchand deemed it suitable for use.

“It’s not as glamorous as finding a real 1957 Harley-Davidson frame,” he says, “but it’s stamped as a 1974 Paughco and the frame does have some character. And, the head tube and the bearings looked good, and so did the rear axle plates.” 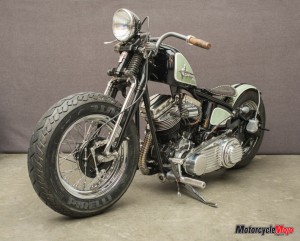 He then turned his attention to the bored-oversized 88 ci engine. Marchand says that although it was in really good condition, but he took it apart to check critical tolerances. All measured up to his satisfaction, so the case halves were cleaned, and new bearings went in to support the crank. The cylinders were given a light hone and fresh rings installed on the pistons. Marchand was pleased to note the cylinder heads were good-quality, Made-in-America replica Panhead units from STD Performance.

Marchand gave the heads to George Welch of Welch Motorcycles in Edmonton. Welch treated the heads to new seats, valves and springs. All new gaskets went between the sealing faces of the cylinders and heads, and the chrome pushrod tubes and “pan” covers went back on.

The transmission is kick-start-only and was disassembled, cleaned and checked, then put back together with fresh seals. After the engine and transmission were rebuilt, both were placed in the frame to check for alignment. Thankfully, the engine output sprocket and the clutch chainwheel lined up and ran true.

He next mocked up the Harley-Davidson springer fork, making new bushings and installing fresh springs and shock to help keep the ride under control. For rolling stock, Marchand built up a set of wheels using the chrome 16-inch rims that came with the project and original Harley-Davidson hubs. To keep the motorcycle more “mechanical” in nature, he opted for drum brakes instead of modern disc brakes. 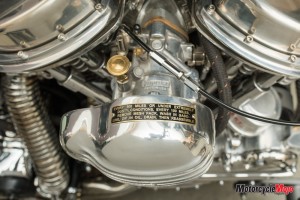 From that point, Marchand says he spent a great deal of time considering the look that he was after. A flowing overall line was a very important aspect of the build, and as he chose the parts that he’d use, a theme emerged: ribs.

For example, the gas tank is an aftermarket Sportster item with a wide…