Yamaha upgrades its midsize triple into a well-equipped and comfortable sport-touring machine.

There was a time when most bikes coming out of the Yamaha factory had inline four-cylinder engines or V-twins. Most of those bikes were either sport and supersport bikes or cruisers. Supersport machines, at least in the middleweight class, fell out of favour after being taken out by the double-blow of the economic crash of 2008 and hikes in insurance. As for cruisers, well, just look at Yamaha’s 2019 lineup: about the only bikes there that fit in the traditional cruiser mould are the Bolt and the decades-old V-Star 250.

It’s understandable that those categories suffered losses in sales, since they were both very focused; one produced bikes centred on racetrack performance; the other on bikes primarily built to look at – both sacrificed comfort and practicality to feed their respective niches. 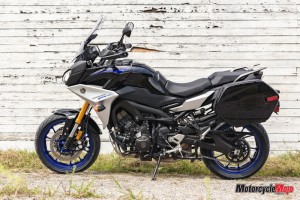 Fortunately, Yamaha has turned things around, and in the last few years, the company has released a slew of new, more practical and more comfortable bikes designed to take on a broader range of riding styles and riders. You’ll find the MT series of naked bikes, from the very practical and affordable MT-07 twin to the MT-10, which features near-R1-like performance. In the middle is the MT-09, and it features a jewel of an engine – a sweet-sounding, liquid-cooled inline-triple that displaces 847 cc and produces copious amounts of torque over a broad spread of rpm. It’s this engine and chassis that underpins the all-new Tracer 900 GT.

The Tracer 900 GT is based on the Tracer 900, which originally arrived in Canada as the FJ-09 in 2015, changing names in 2018 to align with its European nomenclature. The GT also gets some inspiration from its European counterpart, taking the taut, nimble chassis and versatile engine of the Tracer 900 and adding some amenities that make it more practical for everyday use, while also improving its long-distance capability. These include upgraded suspension components, different instrumentation, saddlebags and a couple of other tour-friendly items I’ll touch upon shortly. 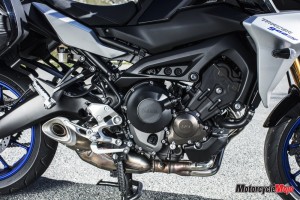 But first, the Tracer 900 begins with a very sporting chassis, utilizing a rigid, die-cast aluminum, twin-spar frame with near-identical rake and trail numbers to the R1, at 24 degrees and 100 mm
(24 degrees/102 mm for the R1), but with a 95 mm-longer wheelbase at 1,500 mm, for a more planted overall ride. Where the GT chassis differs from the Tracer 900 is in the suspension components; the GT adds compression damping adjustability to the Tracer’s rebound damping and preload-adjustable inverted 41 mm fork, and while the shock retains the same rebound damping and preload adjustability, the latter is altered conveniently via a remote knob located just aft of the left-hand passenger foot peg mounting bracket. The added components have increased the wet weight from the Tracer 900’s 214 kg to 227 for the GT.

Like any proper sport-tourer, the GT rolls on 17-inch wheels, onto which are mounted supersport-sized 120/70 and 180/55 Dunlop Sportmax radials. Brakes are also almost supersport spec, with a pair of radial-mount four-piston calipers squeezing 298 mm discs up front, and a single-piston caliper mated to a 245 mm disc in the rear. 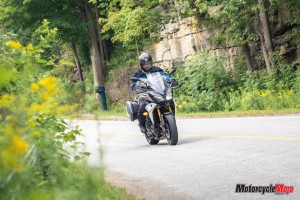 The riding position is upright, with a relaxed reach to the wide handlebar and enough legroom for a six-foot-tall rider when the seat is adjusted to its higher setting, which puts it 865 mm from the ground; the lower position drops it 15 mm, and it’s easily adjustable in less than a minute by lifting the seat and relocating a bracket beneath. The handlebar can also be moved forward 10 mm by removing it and rotating the risers.

The GT replaces the Tracer 900’s LCD screen with a colour TFT screen. While the screen is large, the display itself is about as big as the display on an older iPhone 4, which is to say it’s pretty small, especially since it offers a multitude of information, some of it probably a bit too small for riders in the upper range of Yamaha’s 35-to-55-year-old target market. While it adds a high-tech flair to the GT, it’s not preferable to the larger, twin LCD displays on the Tracer 900, at least not for me.

Screen menus, which control too many functions to list here, are accessible via buttons on the left-hand switch assembly and a thumbwheel on the right switch assembly. Unfortunately, adjustment for the three levels of the standard heated grips is also accessible only through the screen, which is rather inconvenient, since it diverts your attention to the screen while riding. Accenting the heated grips are hand guards that serve more to divert the windblast from your hands than to protect them from bouncing off trees, as on an off-road bike.

The adjustable windscreen is relatively narrow but tall, and provides good wind protection, especially when raised to its highest position. It’s easily adjustable over its 38 mm range while riding using one hand on a central clamp-like handle.

The exhaust produces an appealing drone that’s just loud enough to keep most owners from splurging on an aftermarket exhaust system, which should appease your neighbours during those early-morning start-ups. While Yamaha Canada avoids publishing horsepower numbers, European specs place peak engine output at 113 hp at 10,000 rpm; peak torque is rated at 64.3 ft-lb at 8,500 rpm. Torque delivery is quite broad – the GT accelerating quite forcefully from as low as 2,000 rpm and seemingly never running out of steam until it hits the rev limiter at 11,500 rpm. This lets you select a gear and leave it there, allowing the engine to power you between corners unhindered by gear changes on a twisty road, though if you do choose to sift through the six-speed gearbox, Yamaha has made the upshift easier by including an electric quick shifter on the GT. Although the quick shifter is a nice addition and makes upshifts effortless at a quick pace, it’s an item I would not miss if it were not part of the GT package.

On the road, there’s little fault to find in the way the Tracer GT handles. Steering is light and neutral with confidence-inspiring stability at speed. The foot peg feelers will only touch ground when pushing hard through high-speed sweepers, and the suspension proved best for me in its softer settings, providing adequate control for a modest sporting pace while remaining compliant enough to soak up all but the biggest bumps without harshness. It’s good to have the available adjustability, since a quicker pace would have merited a slightly firmer setup. Access to the suspension adjusters is easy, and the convenience of the remote rear preload adjuster cannot be overstated.

Yamaha has included its D-mode selectable ride modes, which offers three levels of throttle response. My preferred mode was the standard option, which provided a nice balance between the overly aggressive throttle of A mode and the softer B mode, offering an engaging enough response to better exploit the engine’s torquey character. Also standard is ABS and two levels of traction control. To help reduce fatigue while covering long distances, the GT also has cruise control.

The final touch that makes the GT lean more toward the sport-touring spectrum than the Tracer 900 is the addition of colour-matched hard saddlebags. The saddlebags are small, though, containing 22 litres of cargo each. Yamaha does offer 36-litre accessory saddlebags, but the smaller ones come from the European GT model, which are narrow and more conducive to lane filtering in town, which is the norm in Europe. The standard, smaller cases are called City Cases, and these can be found in Yamaha’s accessory catalogue at a hefty $1,670.

This partially justifies the Tracer 900 GT’s price increase over its stripped-down stable mate. The GT retails for $14,599, a $2,600 premium above the Tracer 900. If you can do without some of the GT’s luxuries, you can equip a Tracer 900 with Yamaha’s larger 36-litre Shad cases and hardware, and heated grips for an additional $1,465, for a total of $13,464, though you wouldn’t have the quick shifter, upgraded suspension, cruise control or the TFT screen. I don’t think the difference in price is that big, making the GT a pretty good bargain and an excellent choice if you’re looking for a bike that offers a great balance between bigger, considerably more expensive, open-class sport-tourers, like the Yamaha FJR1300, and smaller, urban runabouts, like the MT-07. It would be even better if it had those bigger bags, though.