Sometimes it just isn’t in the cards to finish a ride, but that doesn’t mean you can’t get back on the road a few years later.

Story and Photos by Gary Cox

Like many, when I vacation by motorcycle, I look forward to spending time with good friends, having the opportunity to make new friends, and enjoying the scenery and the experiences that will ensure lasting memories.

Mojo memorialized our last trip to the Gaspé Peninsula with a published article of our exploits (“Cruz’n the Gaspé,” Jan/Feb 2016). On that ride, three of us rode counterclockwise, stopping at Matane to cut across the peninsula to New Brunswick. This time with my long-time friend Bob, who was also on the first Gaspé ride, we would be covering the section of the Gaspé we didn’t get to see.

Bob’s hometown is Wolfville, on the eastern edge of Nova Scotia’s Annapolis Valley. I reside an hour away in Dartmouth; we started in Stewiacke on Highway 102. It was a chilly 8 C morning on Mastodon Ridge and unseasonably cool for June 26, but given it was pouring rain the day before, we’d take cool over wet.

I was riding the newer-model (at the time) motorcycle I had on our last trip, a 2010 Vulcan 900 Classic LT, which still serves me well. This time Bob had the newest ride – a 2016 Triumph Thunderbird LT. The 1,700 cc beast of a machine is built for comfort and touring. Once we refuelled, we were off and heading to Amherst via the 102, then connecting to the Trans-Canada Hwy 104 at Truro.

We bypassed the Cobequid Pass toll section of Hwy 104 for our preferred Route 4 around Folly Mountain. While Route 4 is slightly longer, you don’t feel as if you’re losing time riding along this smooth and well-maintained road. Hitting Amherst, we zipped straight to the New Brunswick border and onto Hwy 2. 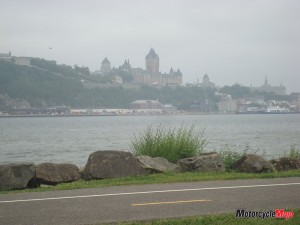 Connecting us to Hwy 10 at Coles Island was Hwy 112, which is less travelled than the traditional route of the TCH. This highway was the first of the second series highways we’d come to find that the N.B. Department of Transportation would rather patch up than resurface. The asphalt consisted of 50 shades of grey; each shade depicted the year it was patched, we figured.

We eventually made our way to Blackville on Hwy 8. Seeing a deer standing roadside contemplating its next move cautioned us for the need to be extra vigilant, especially first thing in the day and as evening approached. Blackville is a sparsely populated community, but well equipped to support the numerous salmon anglers that frequent the area in season. With the spring salmon run over, we seemed to be the only guests at the motel.

The sun had been up for hours by the time we hit the road at 7 a.m. Quickly reaching Renous, we cut west across the province on Hwy 108, a road we dubbed the “nightmare road,” as we headed to Plaster Rock. This road was one grade above impassable in our opinion. Its primary use is by 18-wheelers hauling lumber across the province, and it’s better left to them. As Bob said to me when we arrived in Plaster Rock, “That’s two hours and 12 bucks in gas we’ll never get back.” 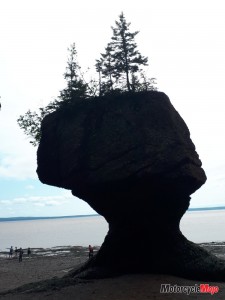 We continued north to Grand Falls and the road had improved dramatically. The pace was pleasing and offered lots of spots to pause for scenic photos as we followed the Saint John River north.
The falls in Grand Falls were not so “grand,” as the torrent of water that usually passes through the gorge was being diverted to the generating station. Grand Falls claims six million litres of water – nine-tenths the volume of Niagara Falls – flows over the falls every second in the spring. Now only a trickle remained for sightseers. We could, however, see evidence of the power of the water by the silky-smooth rocks below the dam. Even dry, these falls were still impressive, though.

We cruised along the secondary road 144 to Edmundston, making our way to Rivière-du-Loup and then northeast to Matane, where we settled for our second night, staying only minutes from the Matane ferry dock. The sunset over the St. Lawrence was breathtaking, and Hwy 132, which had taken us here, was pristine.

Reservations are suggested for the Matane-Godbout ferry, but as the reservation systems were down when we called, they told us to just show up early. The benefit of an early arrival was the opportunity to chat with a fellow rider. He was on a three-wheeled Can-Am Spyder. Our new friend spoke French and no English, and we spoke only a little French, but we managed to learn about each other’s travel plans with hand gestures and broken vocabulary. 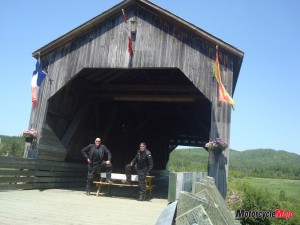 I was surprised that the ship’s crew didn’t have tie-downs available for our bikes. This worried us, as we feared coming back to our bikes lying on their sides or leaning up against our new friend’s Spyder. We put chocks under the wheels and hoped for the best. The crossing of the St. Lawrence to Godbout was as smooth as we had hoped it would be.
Highways 132 on the south side and 138 on the north are truly a pleasure to ride; bends and curves invite you to gently lean into them. Bob and I agreed that riding these roads gave us the experience we long for as riders.

We visited Baie-Comeau, birthplace of former prime minister Brian Mulroney, and took in a sampling of the Quebec hospitality and culture. It was here that we engaged in some wonderful conversation with owner of the Galerie d’art, Elsa Boisjoly, and we checked out her shop full of amazing antiques and magnificent artwork. After exploring the offerings and a highly engaging conversation, Bob and I bought a couple of souvenirs. One purchase I made was an old K-tel record album (Daffy Dances with Chubby Checker) for my eldest daughter. I should have considered how I was going to get it home before buying it. I managed to secure it wrapped in cardboard and placed between my makeshift toolbox trunk and the backrest. Main Street, Baie-Comeau, whet our appetites to experience more of Quebec.

After crossing the Saguenay River on a picturesque, 15-minute free ferry crossing, we reached La Malbaie, where the 2018 G7 was held. What an impressive hotel and casino this is. No wonder it was chosen as the sight to gather the world’s G7 leaders. We couldn’t help but inquire of some of the staff if they encountered Mr. Trump during the…