A persistent invitation leads to a trip to the Ozark Mountains and some really good riding.

“If you come to Arkansas in May,” he cautioned, “just be flexible with your schedule. It’s tornado season down here.” Randy and I were college buddies who had kept in touch through email, but hadn’t seen each other in a decade. An Arkansas native now living in Little Rock, he had been relentless in his invitations to come visit. So, I packed my rain gear – as if that would help – and set off on my 2006 V-Strom 650.

The story begins in Memphis. (Yes, it’s in Tennessee, but West Memphis is on the Arkansas side of the Mississippi River, so it counts.) I stopped for lunch at the Kooky Canuck. (Yes, it’s a Canadian-themed restaurant, but the fact that it was so displaced – and the fact that they challenge customers to eat their four-pound burger and it’ll be free – means it also counts.) I opted for a more reasonably sized portion, but I must say, it was one of the best burgers I’ve ever had. On a full stomach, I did a little walking tour, paying particular attention to the famous Beale Street at the heart of all things “Blues.” I also stopped at Sun Records Studio, now a small museum, where Elvis recorded his first hits.

Heading west over the mighty Mississippi into Arkansas, I followed back roads through towns whose populations were measured in two and three digits, and which punctuated vast tracts of flat delta soil being sown to grow cotton or rice. There were nicer homes, to be sure, but what stood out to me was the preponderance of tired, worn-out houses surrounded by old vehicles and furniture and other refuse, and I wondered at the lives of those who lived there. Arkansas is ranked sixth-poorest state in the nation, and big farming has forced smaller operations out of business. Many homes were completely abandoned. 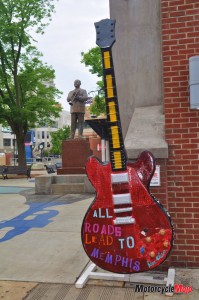 I arrived in North Little Rock just as rain set in for the evening. Randy welcomed me and offered to be my tour guide for the weekend. We began with “The Old Mill,” which figures prominently in the opening scenes of Gone with the Wind.

Then we visited Little Rock Central High School, where, in September of 1957, nine courageous African-American students enrolled in the formerly all-white school. When the governor of Arkansas, in defiance of the U.S. Supreme Court, used armed guards to block their entry, President Eisenhower was forced to deploy federal troops. The advent of television meant the mob violence and military control were seen nationwide, and Little Rock became the face of the country’s struggle for desegregation. So significant was this event that 50 years later, Barack Obama would say that it was because the Little Rock Nine had the courage to ascend the steps to Little Rock Central High that he could aspire to ascend the steps to the White House.

Standing on the front lawn, Randy described his own memories of that time as a young boy. His parents, he regretted to say, were proponents of the “equal but separate” dogma. He recalled the nuanced position that his parents were not bigots. “In fact, they were generous and helpful to our black neighbours.” But they believed each ethnic group should remain separate in their institutions. “It’s hard to completely see beyond your culture,” he reflected, “but I wish they had.”

Lunch was at the Flying Fish, where we ate fried catfish with hushpuppies and drank sweet tea. Dessert was “fried pie,” a common local treat most often made with apple or peach filling folded in a pie crust and deep-fried. “We southerners can take any food,” Randy explained, “and make it bad for your health. Eat up!”

We then traveled on tar and chip roads through flat farmland past the town of Bald Knob (stop laughing) to his childhood home of McCrory. Prime cotton once grew here, but when prices dropped to unsustainable levels 30 years ago, local growers turned to rice and soybeans. It was interesting to see the way farmers now use GPS to build winding berms that create perfectly flat paddies for flooding the rice fields. An aerial shot must look exactly like a topographic map.

Don’t Swim in the Levee 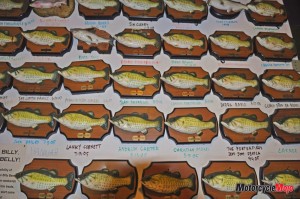 Water moccasins, which are highly poisonous, love the warm 30 cm-deep water. And muskrats do a lot of damage to crops by burrowing through the levees, causing water to drain away. A decade ago, Randy told me, the state of Arkansas began stocking alligators in all 75 counties to combat these pests. A “natural” solution to be sure, but it reminded me of the old lady who swallowed a spider to catch the fly – and that didn’t end well.

I had planned to explore the town of Hot Springs the next morning, but decided to heed Randy’s advice to be flexible. Not because of weather, but because, even though there is a National Park with hot-spring spas, the town is also home to several casinos and “Oaklawn,” a well-known thoroughbred racetrack. This weekend happened to be the Kentucky Derby, and although the race was in Kentucky and only going to be shown on live monitors at Oaklawn, I was advised that unless I wanted to experience the crush of thousands of drunk Arkansans who would be in town, perhaps I should save Hot Springs for another time.

So, after a hearty breakfast, I bade my friend farewell, thanking him for his southern hospitality, and left Little Rock for Russellville, where I caught Highway 7 north, one of Arkansas’ Scenic Byways. A beautiful twisting road, it climbs into the Ozark Mountains and Ozark National Forest – the original home of The Beverly Hillbillies before Jed and all his kin struck it rich with Texas Tea. The thick forests and steep hills soon had the TV series’ theme song playing on a loop in my helmet. It didn’t help that I passed side roads with names like Granny Gap and Lower Jethro (I’m not making this up). 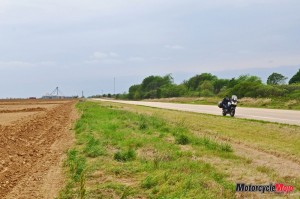 At Sand Gap, I stopped at a shuttered diner to chat with some other riders who were taking a break. Two local guys asked me about my journey and where I was headed. They readily agreed with my choice to ride Hwy 7, but said, truly, there were nothing but good riding roads in the Ozarks. “We recently rode over a thousand miles and were never more than a hundred miles from home,” they said, beaming.

On their advice, I took a detour onto Hwy 16 through Deer, Arkansas, and followed the wonderfully winding pavement up and down the mountains and through Boxley Valley. At Route 43, I took a left only a couple of kilometres to Ponca (population: 9) on the Buffalo National River. Raft and kayak enthusiasts come from miles around to run the river as it flows between massive limestone cliffs. It’s also a centre for the rehabilitation of the local elk population, which was decimated in the 1930s, and travelers can often get an up-close roadside look at these beautiful animals. After watching some rafters, I rode Hwy 74 to Jasper, completing my detour and returning me to Hwy 7.

I carved more curves north to Harrison, the first town of significant size I encountered since leaving Russellville. While it was a clean, modern-looking town with all the amenities, I couldn’t forget what Randy had told me. “Harrison is the national headquarters of the Knights of the
Ku Klux Klan,” he said. “And what bothers me most is what they are teaching their children. At rallies, their children often wear T-shirts that say ‘Klan Kids Kare.’” That sent my imagination and moral indignation spinning. And I couldn’t reconcile this with the large number of churches I was seeing in the area. To be fair, I learned that a majority of the town opposes the KKK and the alt-right, and conflict among whites is a constant source of tension. Nevertheless, the white supremacist organization remains undeterred.

My final stop for the day was in Eureka Springs, which stands in complete juxtaposition to Harrison: an eclectic community for old hippies, same-sex couples and the culturally curious. The main road was lined with quirky shops, bars and restaurants, and unique hotels. Perhaps not surprisingly for the Bible Belt, on a bluff overlooking the town is a 20-metre-tall statue called Christ of the Ozarks, reminiscent of the giant icon in Rio de Janeiro, but smaller.

Alongside the Arkansan Jesus is a life-size replica of a gate into Jerusalem, beyond which visitors can take a tour of many of the Gospel stories recreated with live actors. Originally intended to rival Disney, the project ultimately turned out much smaller in scale. On the edge of town, I also visited the topically related but much more serene Thorncrown Chapel, an award-winning glass oasis in a beautiful woodland setting.

Finally, I set off southward on Hwy 23, “the Pig Trail,” named for the Arkansas razorback, which is an ill-tempered wild hog with tusks and a high, hair-covered backbone. It is also the mascot for the University of Arkansas (and the state, generally). For years, a fierce rivalry has raged between the Fayetteville-based school and Louisiana State to the south. The Pig Trail is the road most traveled by both teams as they compete for dominance. It is also a magnificent moto route.

At McIlroy Wildlife Management Area, I descended a rough, red gravel road toward a campsite I expected to find at about the 3 km mark. At 2 km, however, the increasingly primitive road was completely washed out, so I conceded and rolled out my bivy right there on the road. No one would be coming through on this night. I set my pannier full of food at some distance from my bivy (there were, after all, bears and, yes, alligators in the area), and I drifted off to the sound of a whippoorwill and the dance of fireflies in the trees overhead.

Around 1 a.m., I was awakened by a spectacular show of lightning, and my first thought went to my location: on the ground beside a washout was perhaps not ideal. And rain could make my morning ride out of this hollow a slippery, muddy prospect. So, I hurriedly packed up and, a little apprehensive of tackling the road in the dark, I successfully employed my limited dirt skills for the 2 km back to higher ground. I’m not sure when, in my haste, I had decided I ought to leave the food pannier behind, but as I prepared to bed down for the second time that night, I realized my mistake. Bumping and sliding back down the trail to retrieve it, I thought, “I can always use more practice on loose surfaces – but preferably not at 1:30 in the morning.”

At first light, peering out of my bivy, I could see that the storm had blown over without releasing a single drop; I wasn’t sure whether to curse or be grateful. I opted for the latter, however, and by mid-morning, as I was crossing the western state line, I smiled: I was looking back on an adventure of exploration, friendship and flexibility – another great ride. And hey, there had been no tornadoes…