I first met Wally Klammer at the Greater Vancouver Motorcycle Club (GVMC). I had just finished an evening talk at the clubhouse about Nearly 40 on the 37, my first book about riding into northern British Columbia, when a bespectacled man with a big smile and a grey beard approached me and warmly shook my hand. He was a writer too, as well as a rider. We hit it off, as people do with common interests, and we exchanged copies of our books. 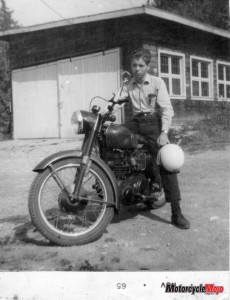 We began emailing. He told me about how he had reserved a table at the Classic and Vintage Swap Meet and Show N Shine, a huge event in Surrey, B.C., with vendors selling many things motorcycle-related. He had sold his books there for several years and asked if I’d like to share his table. I was honoured. But before we could finalize plans, I received some bad news. Wally had passed away on September 5, 2014. Colon cancer.

It was hard to believe that the generous, creative and talented motorcyclist whom I had met months earlier was gone. I would soon find out what a huge impact he made on the motorcycling community in B.C. and about the many people who would miss him.

“Want to go for a ride?” Dwight Harris remembers Wally saying over the phone, one week before his passing. Harris has been a member of the GVMC since 1959, and he and Wally were good friends who had worked to develop off-road trails in B.C.’s Lower Mainland. But on this day, Wally had called him just to go on a day ride.

“He loved his red Ducati Multistrada,”

Harris says of his friend’s speedy tourer. “I’d really like to have some apple pie and ice cream in Hope,” Harris recalls Wally saying. And so they set out, Wally on his Ducati, Harris on his Yamaha FJR1300. “The sun was coming out,” Harris remembers. At a restaurant in Hope, he heard Wally declare: “I’m feeling pretty good. I think I’d like to go further, to Manning Park, maybe out to Princeton.” Once they had gotten to Princeton along the Crowsnest Highway, Wally thought a change of plans would be good. “I’d like to go a different way, maybe through Merritt,” Wally told him. “We finally got to Merritt, had a banana and a piece of pizza, went through to Spences Bridge, down along the Fraser River and back home. Eight hundred kilometres in a day,” Harris remembers fondly. “Wally had a grin from ear to ear. He died a week later.”

Involved in All Things Motorcycle 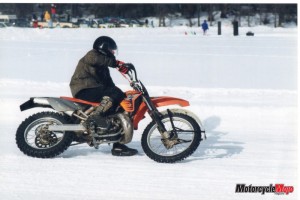 In his many years of motorcycling, Wally competed in ice racing, trials, motocross, enduro and cross-country events. With the GVMC, he organized many off-road, dual-sport and street ride events. He joined the club in 1974, and developed a reputation as a daring rider with a never-say-die attitude to life; he was also known for his quick wit and friendly smile. Once with the GVMC, he traded his Triumph chopper for a red Bultaco and would begin a 30-plus-year journey of amateur off-road competition. And he encouraged and supported many others in their endeavours to ride.

“I remember Wally taking me out to show me some Vedder Mountain trails when I got my first dual-sport bike,” GVMC member Wes Jamison says.
“I had the notoriously solid but heavy Suzuki DR-Z400. Wally had a Yamaha WR250, which made him more nimble a rider off-road.” Wally’s encouragement fuelled Jamison’s interest in riding off-road. “We rode Vedder, Church, Chipmunk, Tamihi, Onion Lake, the Dead Zone and many other places over the years, both with DualSport BC and the GVMC.”

A Volunteer by Nature 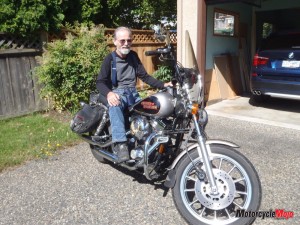 Supporting others seems to have been an ongoing theme in Wally’s life, and it wasn’t limited to B.C. He helped Team Canada as a volunteer at the International Six Days Enduro events staged in Brazil in 2003 and New Zealand in 2006. He was instrumental in setting up the Pacific Northwest Motorcycle Association’s off-road race series in the mid-1980s (his work with the association was topped off with an induction into its Hall of Fame). Wally advocated for future generations of off-road riders by helping to create trails and securing their ongoing existence, including the Chipmunk Creek Riding Area (whose staging area is named after him in his honour), south of Chilliwack, B.C.

Wally left his mark on the sport of motorcycling. The Chipmunk Creek Riding Area was where the GVMC’s Piston Run Hare Scrambles would take place, which he organized for 20 years. In fact, after Wally’s passing, his ashes were scattered there in a unique way with his widow, Marg, and daughters, Jen and Megan, in attendance. “We were all standing in the Wally Klammer staging area,” Jamison recalls. “They had two cannons, I believe. A small one and a larger one, and in the barrels was our dear Wally Klammer. His ashes were blasted out of the cannons.”

Marg Klammer, who supported her husband’s riding endeavours, tells how Wally also encouraged family to pursue riding. “The kids started on dirt bikes when Jenny was six and Megan was four,” Marg says. “Both of Megan’s sons rode with Wally as they grew up. It was certainly Wally’s influence that they all rode.” He was clearly enthusiastic about riding, whether he was doing the riding or watching others hop on their motorcycles, no matter what type they rode.

Dwight Harris says that it was 11 years ago that Wally, he and some other riding friends created the Full Throttle Tour. It’s an annual end-of-riding-season tradition that continues in his honour every September. “We take two weeks and tear out on a long-distance tour at the end of the riding season,” Harris says. “We’ve been to Vegas, Utah, Colorado, Wyoming, ridden the Tail of the Dragon. We’ve been all over. We’re running out of ideas now!” It was on these rides that he noticed Wally heading back to the hotel room in the evenings to write while his riding buddies would chat over a beer. “Ideas for his books were something he’d collected along the way. He’d scribble notes, and then when he was home, he’d put them in a book,” Harris says.

Throughout his motorcycling days, Wally would write. His style of writing included a combination of off-beat humour and daring adventure. His stories included travel features and off-road event news for various motorcycle magazines. He wrote regular columns and worked as an editor. But Wally’s books show an enthusiasm for the sport of motorcycling that went beyond riding, through the adventures of a fictional motorcycle club called the Coast Mountain Riders. A Rally at Castle Rock, A Happening on the Sunshine Coast, A Rally in Falkland, Dirt Bike Chronicles and A Night at the Dancing Loon were all created with an adventurous style and a uniquely West Coast setting that would frame much of his fiction writing.

“He always wrote, mostly for himself,” Marg says. “But motorcycling gave him the stories and a voice.”