Triumph has created the next generation of a retro, high-pipe, off-road desert sled that works equally as good on the street.

Crossover cars are becoming ever more popular, as passenger car platforms are increasingly used to create a multipurpose vehicle with the space and practicality of an SUV, but the comfort and handling of a sedan. The same thing with bikes – the most obvious example being BMW’s succession of bestselling GS models, or Honda’s NC750X and CB500X, all attempting to deliver the best of both worlds without one compromising the other.

But now Triumph has delivered a pair of crossover models that seek to answer a different question: how to combine retro cool with modern functionality in a dual-purpose motorcycle. Call it a crossover Crossover. That’s the conundrum that faced Triumph’s chief engineer, Stuart Wood, and his R&D team three and a half years ago when they began work on creating the new-for-2019 Scrambler 1200 XC and XE variants. To do so, they took the all-new 1,198 cc, liquid-cooled, parallel-twin T120 engine they’d just launched to power the new generation of larger-capacity Bonneville models, headed by the Thruxton café racer.

Rather than concocting a powered-up version of the 900 cc Street Scrambler, which, just as it says on the label, has only minimal off-road pretensions, Wood’s design brief was to develop a pair of crossover bikes with the Bonneville family’s traditional twin-shock neo-classic styling, and that were just as adept both on- and off-road as the company’s thoroughly modern 800XR/XC dual-purpose triples. So in this way, Triumph is seeking to restate the genuine nature of the Scrambler nametag that it first laid claim to years ago, long before BMW or Ducati ever used the name today on what amount to custom street models. 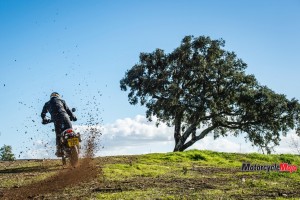 In doing this, Triumph has taken another long look in its corporate rearview mirror to launch these modern classics as a tribute to one of the most successful models in its 1960s classic-era lineup, the go-anywhere Trophy street enduro. Amid all the furor when Ducati launched its Scrambler sub-brand back in 2014, it was conveniently overlooked that it was actually Triumph that invented the street-legal scrambler category back in 1949 with the TR5 Trophy, so named after the three Speed Twin-based bikes that the British company built for the 1948 ISDT in Italy, winning three gold medals and the Manufacturers Team trophy in that gruelling event.