During a long weekend last May, I was invited by some new friends to go dirtbike camping. “Dirtbike camping? Such a thing exists?” I asked.

The next thing I knew, my two kids (aged six and nine) and I, along with some great friends, were heading to Nickel Mine for three nights of camping and dirtbike riding. I was in heaven and I was being introduced to a world that I never knew existed, and learning about the long, complex history of dirt biking in the area.

The Hope Nickel Mine Riding Area is a network of riding trails near Hope, B.C., that has been maintained by the Fraser Valley Dirt Riders Association for the past 30-plus years. Enjoyed by motorcycle and ATV enthusiasts alike, it’s made up of forest service roads, abandoned mining roads and approximately 100 km of trails, many of them uniquely suited for beginner and younger riders. Many more trails are being recovered, created and improved through the efforts of the FVDRA, which had not been allowed access to the area for the past two years.

Until 2015, the club, which regularly had more than 150 family memberships (for a total of 350–400 members), enjoyed the vast area of trail systems that offered terrain ranging from easy green trails for beginner and younger riders up to more challenging terrain for the more advanced riders. The campsite was situated near the tailings pond, which featured a small motocross track, built by FVDRA members, so the kids could ride and practise while their parents’ supervised and relaxed nearby at camp. There was even a big, open riding area where they used to play dirtbike soccer, a made-up event similar to polo. It was a place enjoyed by riders of all abilities from surrounding areas. 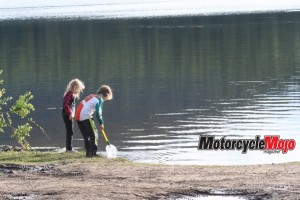 However, on August 4, 2014, a breach of Mount Polley tailings pond in central B.C. created an environmental disaster that prompted the government to require all tailings ponds be inspected and raised to proper standards. This included the tailings pond at Nickel Mine, and so access was restricted for the FVDRA, with camping, and dirtbike riding on some trails still allowed.

During this time, more and more logging occurred in the valley, which devastated a fair number of the well-maintained trails. Some agencies, however, were good at maintaining communication with the FVDRA. These agencies would receive GPS tracking information and try to avoid or re-establish trails, but they didn’t usually reach the standard that the FVDRA would want for safety and for the events it had been hosting with the Pacific North West Motorcycle Association for so many years.

Every weekend there was a lot going on in the area of Nickel Mine, and it was slowly on the decline due to these mining and forestry developments.

Then in November 2015, an unfortunate logging accident occurred in which a truck and driver were swept off the road in a storm-triggered landslide, causing the closure of the area to all recreational users. For the entire 2016 year, FVDRA members weren’t allowed in the area at all. In 2017, after the area was surveyed and certain parts were fixed, access was again granted, but the forestry district now required more paperwork, including a letter of understanding authorizing the association to maintain the trails. 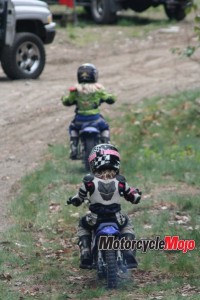 For 2018, FVDRA members and administrators were permitted to come back and start fresh to make progress in repairing and creating new trails.  A new, unofficial, temporary area on public Crown land is now set up for riders to camp. Anyone can ride the area, and camping is free for paid FVDRA members. The association is considered to be the stewards of the area, because it has been doing it for so long and because its members are the ones that now have proper authorization to do work by the First Nations and Forestry Services.

The goal is to bring the area back to how it used to be. It’s about an hour away from downtown Vancouver and is one of the only riding areas that have low-gradient trails. Many other areas nearby have very few green and beginner trails, whereas Nickel Mine is perfect for families. The FVDRA is all about regaining membership and reviving the club and the entire dirtbike-riding experience. An annual membership is only $20 per family.

During my first weekend dirtbike camping with the kids, I was thankful that I was to be meeting my new friends in the remote area. It was a little daunting to be doing it all on my own with two little kids, so I drove slowly and carefully and was happy to see familiar faces as we rolled into camp. There was our friends’ fifth wheel (which helped us tent dwellers enjoy a slightly more glamorous camping experience), along with maybe seven or eight more trucks and trailers and various-sized campers and tents. Dirt bikes were rolling in and out of the area, and as soon as my kids saw some others their age riding, they flung the doors open and ran outside to make new friends. 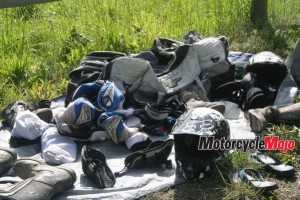 After we set up camp, the kids dressed quickly into their riding gear and spent the next few hours riding up and down the camp access road over and over again. I was introduced to several FVDRA members and instantly felt a part of the riding community. I was amazed that in all my years of riding, I had never gotten wind of the existence of dirtbike camping.

For the next few days, we enjoyed taking turns and riding in different configurations of groups, depending on who wanted to ride and their abilities. At one point, for the first time ever, I was able to ride a length of logging road with both my kids. My daughter, Kai, at six years old, had improved her riding so much in just one day of exploring around the campsite with other kids that she was able to manage an hour of adventurous riding up a logging road, through some little creeks and up and down some decent hills, on a little Yamaha PW50 no less.

The scenery, lush West Coast forest (although quite sparse in areas due to extensive logging), was stunning, and the feeling of being able to share the dirtbike riding experience with my children was indescribable. My son, Ashton, and I had a few higher-level rides through trails that varied from tight and technical single-track rides to wide open trails alongside stunning hillsides. Occasionally, I’d leave the two kids in the care of willing adults back at camp and enjoy an adult-paced rip around a few of the more challenging trails.

When we had difficulty starting Ashton’s KTM 50, the family across the camp from us generously let him ride their daughter’s PW80. When I heard a family talking about wanting to teach their five-year-old son to ride, I offered to help him, and in only 30 minutes he had joined the rest of the kids in their parade of riding up and down the length of the camp.

On the final day, some of the members surprised the kids with a scavenger hunt that had them cheering and laughing and working as a team to find eight hidden balls around camp that earned them a loot bag full of candies, bubbles and games. We had a rib fest dinner one night, and traded many stories about motorcycles and adventures by the fire while we drank beer and roasted marshmallows. By the end of the three days, we were dirty, happy and tired, and had made many new friends along the way.

As we were rolling away from camp, a couple of the members sauntered over and mentioned that they were heading to a different camp in a month’s time. “Would you like to join us?” Having just experienced one of the most memorable weekends ever with my kids, I couldn’t possibly say no to another opportunity for adventure, and so only four weeks later I packed up the truck again and this time drove four hours to Duffy Lake near Kamloops, which is another dirtbike-friendly campsite that many FVDRA members frequent.

This camping experience was quite different from the one we had at Nickel Mine, mostly due to the lake and the extra activities Duffy Lake offered, but the basics were all the same: dirt bikes, the great outdoors, exercise, fresh air, exploration and adventure. We saw some of the same faces and met many new ones, and with different terrain and trail options, my son and daughter improved their riding and their endurance, and my heart glowed with the sharing of my passion with them.

I am so thankful that I was able to meet the members of the FVDRA, talk to them about their 30-plus years of running the club and hearing their plans for the future, all the while getting to enjoy riding and adventuring on my dirt bike. The goal for the next few years is to grow the club membership back up to what it used to be and to continue to offer riding experiences for families and friends for many years to come.

If you are interested in becoming a member, please visit fvdra.com.