Where every bike is a Winner-palooza – or something like that

The fall weather was perfect when I illegally parked my dusty Harley by the main entrance to the Pipe Shop, a 929-square-metre venue on the waterfront in North Vancouver. I was pretty sure that this was going to be a great weekend. Forty-something choppers on display, food, beer, music, tattoos, art, beer, hammocks, custom patch-making, and hundreds of bike lovers from places as far-flung as Oregon, New Jersey and California made for a heady mix that filled my old heart with joy. Being old enough to have been around when bikes like these were first invented created some real anticipation.

Loserpalooza 2018 took place during the third weekend of October. We don’t often see shows like this here, so I asked organizer Becky Goebel (@actuallyitsaxel) how she came to be the Queen of Loserpalooza. “Two years ago, I wanted to throw a party in Vancouver cuz not much cool stuff happens in this city. I stumbled upon a perfect venue, and because of my background with motorcycles and my involvement with social media, it was easy to put together a night of bikes, beers, art and music. I never really thought the party would turn into a bike show like it did, but it kind of happened naturally. Loserpalooza is a full-on vintage chopper show now because I love old choppers and I just want to put on an event that I’d want to go to.”

What’s in a Name? 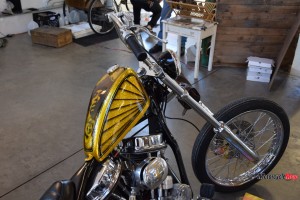 But where did that name come from? Becky explained: “I made a Facebook status that said: ‘Good name for the biggest/best motorcycle show/beer party ever?’ There were lots of comments, but one from Mike Babz said Loserpalooza. He told me I had to give him free beers at every event if I wanted to use the name, so that’s what happened.” Made sense to me.

It was time to wade in and let it wash over me. Take a deep breath. Feel the good vibes. There were so many incredible things to look at; it was hard to know where to start. The choppers were large, shiny objects (well, some were shiny), so they grabbed my immediate attention. I’m a sucker for such things. Becky had told me that all the bikes were here by invitation only, with her friend Curtis Douglas helping her find and select the participants. And they had to be hardtails, so I was expecting some very cool, old-school chops, and I wasn’t disappointed.

It Started with a Tank 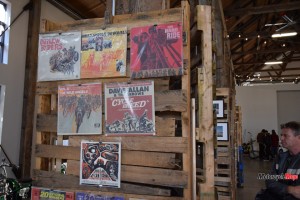 Kenneh was a well-bearded middle-aged rider from Portland, Oregon. His bike was listed as a ’48 Harley FL, but like most of these bikes, it was an amalgam of parts, some dating back to the 1940s and some as new as the 1970s. And then there were actual new parts that he had made himself to look like old parts. “The bike was built around the tank,” Kenneh said. “I saw that tank and said, ‘Yes, I need to make a bike from that.’ I left it as it was, except I painted the tiger on it in 1950s style, but made the painting look old to suit the bike.”

He did an amazing job. Kenneh pointed out various parts and their ages – all old – and then he pointed to one part in particular. “You see that hand shifter? That shifter I made from a part from an elevator door mechanism.” It was impossible to tell the difference between what was old, what was new and what he had made himself. I pointed to the mufflers. “Copper Triumph mufflers. I had never seen them before. You know, copper is usually the base when chroming, but these were left copper. I had to have them.” Kenneh cut them to be a slip-on fit, because he doesn’t like the look of clamps. I asked him where he got the beautifully aged seat. “That leather is from an old couch that I found at the side of the road. I cut out the leather and used it to make the seat.”

As I walked past the hammocks set up in the centre of the venue for anyone to use, I saw a young guy with a joint in his mouth (weed had just been made legal in Canada). I asked if I could take his picture. “Sure, go ahead,” he said. I asked if I could have his name for the photo. He told me his name is Brendan. “What’s the picture for?” he asked. I told him I’m doing a story for Motorcycle Mojo magazine. His face lit up. “My dad reads your magazine! He’ll be so proud,” he said with a laugh. He gave me his email address to make sure he doesn’t miss the story when it comes out.

A First Time for Everything 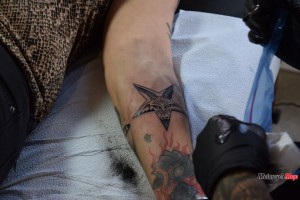 One chopper that deviated from the sea of Harley-Davidsons (there were also a beautiful Indian and a Triumph) was an ’81 Yamaha XS650 built by young Johno Love. I asked him about the build. “Well, a friend of mine says, ‘Let’s go to Born Free.’ I figured you gotta ride a chopper to Born Free. So this is my first build. In fact, it’s my first bike. I had never ridden before.”

I was somewhat flabbergasted by this.

He continued: “Well, I had a friend who had an engine and a frame, and another friend had the springer front end. So, we just kind of put it all together. It took six weeks to build.” Pretty impressive first-time effort! I asked him about the lighting: how good are those rectangular headlights? And I really like that mini-spot that he had placed behind the forks. “I don’t even know what those headlights are. They’re really pretty useless,” he said, laughing. “But the spot works pretty good. I don’t know what that’s from either.” On the way to Born Free, in the middle of nowhere and the middle of the night, the main relay blew, leaving him with no lights. But that’s life on a chopper.

I told him that I’d never ridden a chop with rabbit-ear handlebars, because I always figured I’d crash. “Yeah, all my friends told me, ‘Don’t use rabbit ears!’ But they just suit the bike. I looked at the bike, and it had to have them. But when I first rode it, I was all over the place.” What’s next? A friend of his had a Knucklehead with tranny taking up space in a closet. So, he gave it to Johno for his next project. You can’t make this stuff up, kids.

Aside from the bikes, there was art. Some in the form of photography from Liz Leggett (lizleggettphotography.com), who is here from New Jersey to show her work and cover the event for a chopper mag. She turned out to be a gem with an eclectic variety of interests. She’s been shooting hot rods and bikes for years, but she and her husband also share a love of steam locomotives and military vehicles. And she’s working on fixing up a hearse for Halloween. Her photographs were beautiful, and she proved to be good company over the weekend during the periods we both needed a break from our work.

AJ was here from Noice Paint (@noicepaint). He was wearing many hats this weekend. He had a bike in the show, and beautiful helmets and gas tanks on display that he had painted, and he was hand-painting all the signage for each bike. His work was superb and he chatted amiably, even though he was buried in his hand-painting work.

Because the event lasted all weekend, I inevitably ran into some friends from the Vancouver motorcycle community, which gave us a chance to catch up. I mentioned to one friend that some of the chops, like Kenneh’s, looked as if they’d been dragged out of a river. But in a good way. She mentioned it to Kenneh when he stopped to say goodbye on his way out. He laughed and said he was leaving to go and look for more bikes in rivers.

After dark, I went outside in search of food. There were dozens of bikes surrounding the area, all parked illegally. No one bothered us about our haphazard parking lot. Some of the bikes were as nice as the ones on display inside.

The weekend progressed. Apparently, at the Saturday after-party, someone rode a chopper into the bar that’s hosting the party. Regrettably, I missed this.
Sunday was largely a repeat of Saturday. I got to spend more time with Kenneh, who turned out to be a fascinating, gentle soul. We talked of the vagaries of life, family, owning your own piece of land and, of course, bikes. His parting words to me were to look him up the next time I’m in Portland. He’ll be around. I look forward to it.

The Weekend Winds Down

Sunday afternoon things wrapped up. People started loading bikes in trucks and trailers, or just riding them off. They had places to be on the Monday. I felt a bit lost after two long days of intense chopperdom.

After the chaos of the weekend had died down, I asked Becky about the future. “As of now, Loserpalooza is an ‘every second year’ chopper show. It gives people time to build bikes or come out of the woodwork to put something together in a place where there isn’t a ton of choppers.”

And what was her favourite part of the whole thing? She couldn’t choose just one.

“A truck full of young dudes from California came up to the show with a van they were sleeping in and a trailer full of choppers. It was pretty cool to have people come from far away and party hard – that’s what this shit is all about. We also had a vintage tintype photographer at the event this year developing pictures live. There was also a DJ spinning records, two tattoo artists and a chain-stitch embroidery vendor who stitched names onto jackets with her old machine.” She continued: “All this stuff is just hobbies my friends do and come together to make the event cool, so it was a pretty good vibe around there that weekend!”

If you have a bike to finish building up or are interested in having your chopper in a future show, email loserpalooza.van@gmail.com or follow on Instagram at @loserpaloooza.