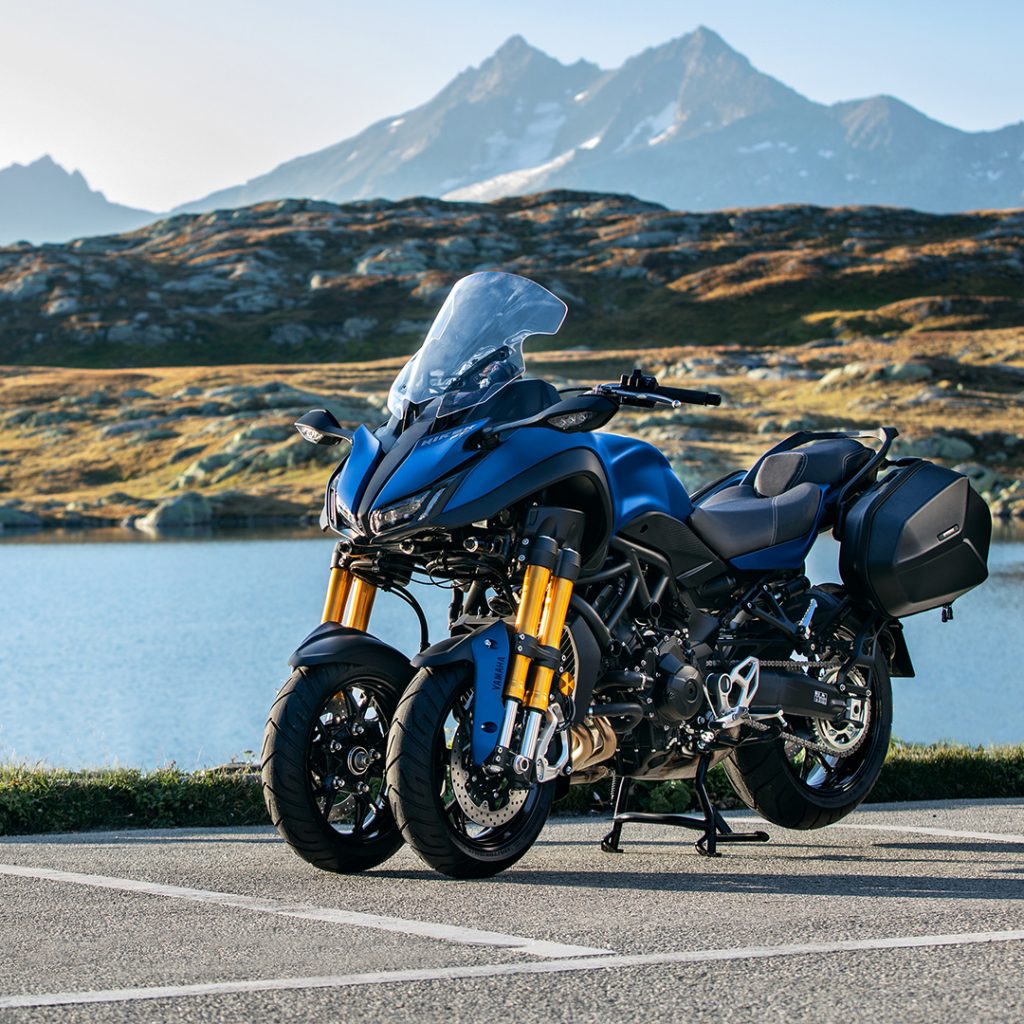 Yamaha Motor Company is proud to announce that the NIKEN motorcycle, featuring Leaning Multi-Wheel (LMW) technology, has been honoured with a “Best of the Best” 2019 Red Dot Award in the Product Design category.

If you’re an experienced rider like me and get more satisfaction from motorcycles than any other type of vehicle, you probably looked at the 2019 Yamaha Niken GT and wondered: “Why? What’s the point of a leaning three-wheeler when two-wheelers have been leaning successfully for more than a century?”

Well, I won’t keep you guessing and address that one right now: the Niken leans, steers and feels just like a motorcycle. You therefore must be versed in the operation of a motorbike to ride it. You have to push on the same side of the handlebar as the direction in which you wish to turn – you want to turn right, push on the right handlebar. The Niken leans as freely as a bike and will fall over if you neglect to put a foot down at a stop. If you were to sit on a Niken with your view of the front wheels masked (otherwise, you can see them if you lean your head a bit to either side) and ride away, you would take some time to figure out there was something different about it — if you’d even pick up on that at all. For the most part, the Niken rides like a motorcycle except for a couple of distinct, yet subtle differences – and one really big one.

The Niken shares its 847 cc inline-triple with Yamaha’s Tracer 900, but with a slightly heavier crankshaft, and transmission gears made from more robust steel. Yamaha Canada does not publish horsepower numbers, but in Europe the Niken claims 113 horsepower and the same 64.3 ft-lb of torque as the North American model, so the horsepower figures should be pretty close.

If you look at the Niken’s spec sheet, you’ll see numbers that are much like those of a motorcycle. Chassis geometry is aggressive by two-wheel standards, with a steep rake angle of 20 degrees, trail at 74 mm and a wheelbase of 1,510 mm. The only motorcycle that comes to memory that had a rake almost as steep as the Niken’s is the Buell Firebolt’s, at 21 degrees. The wheelbase is only 10 mm longer than the Tracer 900’s. The only spec that’s outstanding is the Niken’s front wheel’s track, at 410 mm, which is the width between the front wheel centres. That last spec is significant because it is what legally distinguishes the Niken from other three-wheelers for licensing purposes: because it’s less than 465 mm, the Niken isn’t classified as a three-wheeler, and therefore requires a motorcycle licence to operate.

The riding position is naked-bike upright, with a relaxed reach to the foot pegs and a broad, cushy seat. The riding position and seat proved remarkably comfortable after two days of riding, and the seat, in fact, is one of the better perches I’ve sat on recently. Seat height is 15 mm lower than the Tracer 900’s, at 835 mm, and fuel capacity is 18 litres. Claimed wet weight is 267 kg, or 40 kg more than the Tracer 900 GT’s.

Yamaha touts the Niken GT as a sport tourer, so it includes some touring amenities, such as a tall windscreen; a pair of quick-release, 25-litre semi-hard saddlebags with waterproof liners; heated grips; and two 12-volt accessory outlets, one mounted by the instrument panel in the fairing and the other mounted on the left side of the bike above the passenger foot peg.

ABS and two-level traction control are standard, as are three ride modes that adjust throttle response. I had two issues with the Niken, one of which was abrupt throttle response in the most aggressive Mode A, although switching to the softer Mode B easily cured that. My second gripe is that you must use two buttons to set the heat level for the grips. A button located on the forward-facing side of the left switch assembly calls up the grip heat menu in the instrument display, then a thumb-adjusted rocker switch turns on the heat and you select one of three levels of heat. A single button could do all the work.

The Niken GT also has an electric quick shifter, although it only works on the upshift and only above 4,000 rpm. The bike shifted smoother when using the clutch, so I resorted to using the quick shifter only when riding at an elevated pace.

One of the Niken’s more subtle traits is the lack of any jarring jolts coming through the handlebar when hitting bumps. This is because the handlebar pivots on the frame (just like on Honda’s new Gold Wing) and connects to the front wheels (or wheel, in the Gold Wing’s case) via linkages. This feature isolates the Niken’s handlebar from road irregularities while providing ample feedback when steering and requires an appropriate, motorcycle-like amount of effort to steer – unlike non-leaning three-wheelers, which require near-Herculean strength.

Another subtle trait is that while the Niken flicks easily from side to side at lower speeds, the effort to do so increases exponentially as speed increases. I attribute this to countering the gyroscopic effect of three wheels instead of two. There’s also a very minute lag between what you input at the handlebar and what the bike does, although the lag is negligible; I’ve ridden cruisers that reacted much slower.

Then there’s that one, not so subtle trait: “Man, can this thing turn!” I did things to test the Niken’s aptitude to change direction that would have had a conventional bike bucking me off the saddle in disgust. I rode the Niken in a way that went against my natural instincts as an experienced rider, and yet it carried on without protest.

California usually is temperate, even during winter, but the forecast called for highs of 10 C, overcast skies and lots of rain during the Niken’s two-day press test. As it turned out those were just about the best conditions in which to test the bike.

On drenched, waterlogged pavement, I rode the Niken through corners at what would have been an aggressive pace in dry conditions on a motorcycle. I trail-braked hard into tight turns and leaned at angles that normally would have caused a motorcycle’s front end to tuck into disaster. I hammered the front brake mid-turn, just to see when this thing had had enough and booted me off the seat. Well, it didn’t. I didn’t really try anything dangerous or attempt to crash the Niken, but I did push it harder than I have any motorcycle on wet pavement, and it rallied on without a wiggle.

Needless to say, I was awestruck. The thing is, the Niken returns all of the sensory feedback and stimulation that makes riding a bike so much fun while, at the same time reducing any discomfort you may feel about tucking the front end to almost nil. In fact, only years of instinct and reflexes honed on two wheels kept me from pushing the Niken further than I did. It just seemed unnatural the way it handled everything I threw at it.

Fortunately, the second ride day was mostly dry. This is when I discovered that the Niken can easily keep up a fast pace to match any sport bike on winding roads. At an elevated pace, the three-wheeler railed along, steering sharply and with unwavering stability almost regardless of what was happening beneath the front tires. I hit mid-turn bumps at speeds that probably would have caused a two-wheeler to at least shake its head, but bumps passed beneath the Niken unnoticed. This certainly raises the confidence level and may cause you to push harder than you would on two wheels.

I even encountered mid-turn damp patches that would have caused me to slow down when on a conventional motorcycle, but I did nothing to readjust my speed on the Niken. The confidence generated by the added stability and traction up front will not, however, transfer well if you get accustomed to the Niken and then switch to two wheels; you’ll have to remember to tone it down when riding on the latter.

And if your riding buddies point fingers at you and laugh because you’re riding a bike equipped with training wheels, let them laugh, then ride circles around them when it rains. You should, however, be sure to warn them not to try to keep up with you on wet pavement. Seriously. Trying to keep a quick pace with the Niken on wet pavement eventually will lead to disaster for them. Call it a cheater bike in the rain.

So, Back to Why

I was partially expecting to dislike the Niken. But, after riding it, I discovered that Yamaha is onto something here: the Niken GT really works. It works especially well when the pavement surface is compromised by bumps, rain or occasional sandy patches. You can almost ignore what is happening beneath the Niken’s wheels and just carry on.

At $20,999, the Niken GT is pricey, but the peace of mind that the extra front wheel provides might be just the thing for a rider who may have tucked the front end on a two-wheeler once and never really got over the trepidation of relying on a single contact patch to maintain control up front. If you’re a high-mileage rider and your riding season stretches from early spring to late fall, no other machine will return the consistent handling throughout the less temperate seasons than the Niken.

So, why? Because while the Niken feels like a conventional motorcycle for the most part, what sets the three-wheeler apart is its ability to handle unsavoury road conditions. Heck, it had me wondering if Yamaha hasn’t just invented a better motorcycle.