Angling for Some Backcountry Adventure

What better way to spend 13 days off work than to tackle B.C.’s backcountry with your adventure bike and a fishing rod?

I leave central Vancouver Island mid-August on my 2013 KTM 990 Adventure Baja, heading south and over to British Columbia’s mainland. This kicks off a 13-day roundtrip adventure through the southwest coastal mountains, north up the Fraser Canyon, west through the Cariboo Chilcotin region to Bella Coola, and returning to northern Vancouver Island via ferries and weaving my way south back home. The trip will consist of roughly 1,100 km of gravel roads from maintained double-wide to deactivated single track, 800 km of various paved roads and 400 km of ferries on three different vessels and routes, and I’ll be tested by changing road conditions, gear failure, forest fires and temperatures between 3 C and 33 C.

The Fraser River Canyon offers remote, rugged beauty with its impressive carved slopes up to 1,000 metres deep and nearly 300 km long. The lower half of the canyon is easily accessible via Highway 97, but it’s the remote northern half I am exploring. I’m planning on four days and 500 km of gravel back roads from Pavilion to Tatla Lake. I can already taste the dust and fresh trout I’m going to eat!

Focus on the Road 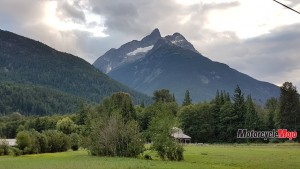 On High Bar Road, I descend 750 metres in elevation over 4.5 km with five hairpin turns. The rock is loose and sharp, and the single-lane, gravel road edge is abrupt and deadly. My peripheral vision picks up the stunning views, but all focus is on the descent and brake control. Reaching the bottom, I’m reminded of the local perils by a half-buried horse skeleton. The next 25 km are slow with a hundred turns and wide open canyon vistas.

This may be the crux, the impasse. I smell and see smoke billowing in the distance; the B.C. interactive wildfire map stated Poison Lake and Meadow Lake Roads were closed. This would cause me to backtrack, cut off my route through Gang Ranch, lose a day at minimum and ride hundreds of paved kilometres toward Williams Lake. Luckily, one hour later, I have skirted the fiery crux and am on route to Gang Ranch.

Beautiful Meadow Lake Road descends from the east Cariboo Chilcotin plateau and back into the Fraser Canyon. After crossing the Fraser River on a rustic suspension bridge, I find an overgrown trail littered with small cacti close to a creek. This becomes my prickly desert camp for the night and gets me close to Empire Valley Forestry Service Road (FSR) for tomorrow morning’s adventure.

Near disaster! My rear wheel has locked in third gear and I am doing an emergency slide on a steep gravel corner. It happens so fast, only riding instinct can react – years of dirtbiking skills save the day. I jump off the KTM, fearing my chain has broken and locked my rear wheel. But something looks odd. It takes a few seconds for my eyes and brain to evaluate what I’m looking at. In my haste to leave camp a few kilometres back, I forgot to secure my top bungee cords. My sleeping pad caught on the bungees, rolled off the back of the bike and got sucked into the rear wheel, locking up the tire. It takes immense force to dislodge it. My nights just got a little longer with no functioning sleeping pad. Safely back on my bike, I reach my destination.

Gang Ranch is the second-largest ranch in Canada and has a rich history. To this day, it remains a working cattle ranch with dozens of gravel roads, ATV tracks and single-track criss-crossing over its one million acres. I make a stop at the ranch office to talk “ranch life” and get some directions. Once on the less-travelled 2700 Road, I’m standing on my pegs, visor up with the cool wind in my face. From the north end of 2700 Road, Farwell Canyon and the hoodoos are a stone’s throw away. Farwell Canyon is exceptional – a quick break from the sun under the canyon bridge and some seasonal entertainment watching the local First Nations dip-netting for sockeye salmon. 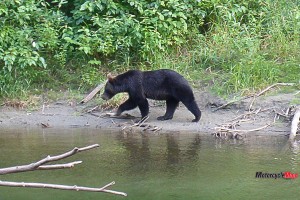 My next target is a pleasant-looking FSR called Chilko-Newton Road. A brief stop to fish the upper Chilcotin River results in two beautiful rainbow trout for dinner. The rancher whose land I crossed to fish the river makes contact with me. We share some laughs, a few stories and a handshake, and I get an offer to tent on his pristine backyard lawn for the night. Mike and his family join me in the backyard under the stars, where strangers bond for one night. The next morning, Mike leaves me with an ominous warning about Chilko-Newton Road.

Finally, exhausted man and machine exit Chilko-Newton Road. It had washouts, mud holes, kilometre after kilometre of sandy, loose soil or pounding hard-packed river rock and zero signage with many confusing spurs. It took me four hours to ride 75 km, which proved to be one of the hardest tracks of the trip. With fuel, panniers and trip gear, my KTM 990 Baja is pushing over 272 kg. Combine the motorcycle weight with up to nearly 120 peak horsepower and that makes for an unwieldly beast on a very slow, rough track. I find out two days later Chilko-Newton Road has been deactivated for years due to the washouts and deteriorating conditions.

Chilko Lake makes for a great stop and is B.C.’s largest lake over 1,000 metres in elevation. I take a short break at Chilko Lake Lodge, talk with some Fish and Wildlife officers and enjoy a freshly made lunch with a cold draft beer in the lodge bar. But before I get too comfy, I gear up and start the remaining 70 km that day to Horn Lake campground. Not far from the lodge, I glance over my shoulder and realize my sleeping pad has fallen off! So first I crush it, then totally lose it two days later. The pad had a foam core, so by folding it in half, I at least had a torso-only sleeping pad; now I really have nothing.

Deeper into the South Chilcotin Mountains is a set of lakes: Sapeye, Horn, Bluff and Middle. Many kilometres down Mosley FSR, I come across a curious, abandoned cabin with some old, abandoned 1950s vehicles. To be more exact, a Chevrolet 3800 one-ton flatbed, an International Harvester R100 and a rare Chevrolet delivery van. The vehicles and log house speak of a different era out here.

Time to Rethink the Route 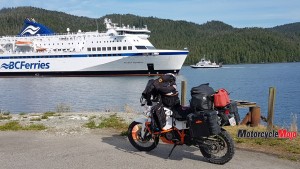 Farther down the FSR and uphill on a spur road, I find myself high over Middle Lake on a deactivated secondary FSR. The riding is fun and fast with overhanging bushes, small washouts, smooth grass, hard gravel and a couple of creek crossings for extra heart pump. Prior research indicated this area was an old approach route to B.C.’s 4,016-metre-high Mount Waddington, only 40 km away from my location. Some 45 minutes later, I decide that it’s time to turn back. I’m alone, far into the backcountry on an unnamed spur road with no communications, nobody knows my whereabouts and I’m on a fully loaded adventure motorcycle. Knowing when to turn back comes with…