It may not fall into the touring or even daily rider category, but it definitely fits nicely into the segment of head-turner.

Photos by: Harley-Davidson and Costa Mouzouris

When the first Harley-Davidson Softail hit showrooms in 1984, I was working as a technician in a Harley dealership. This was just a few years after the company split from AMF, a sporting-goods company that bought Harley in 1969, and through the 1970s had attempted to make the Motor Company more profitable by cutting costs and increasing production. Unfortunately, combining those measures was rather counterproductive, and the result had a detrimental effect on product quality. I remember the Shovelhead-powered Harleys I worked on at the time as being unreliable; they also leaked and vibrated so hard that parts broke.

The Softail changed all that. With twin shock absorbers hidden beneath the bike, it featured a hardtail look, and also introduced a then all-new engine, aptly called the Evolution. The engine proved more reliable and performed better than the Shovelhead it replaced, and the bike’s retro styling struck a chord with both traditional Harley riders and non-Harley riders, so it sold very well. It was popular enough that it helped turn the company around, and if you ask me, it is one of the most significant bikes ever produced by the Milwaukee bike maker. That original FXST Softail eventually became the foundation onto which an entire platform was based, and from which dozens of models have since been spun off. 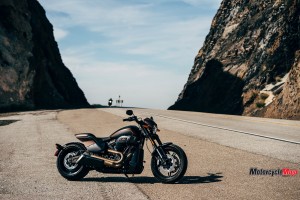 The Softail platform entered its third generation last year entirely redesigned. It was the biggest change Harley made to the platform since its introduction. However, the American bike maker also did something else quite significant last year: it silently dropped the Dyna platform, which was originally introduced in 1991. Until the end of 2017, all big-twin models, except the company’s touring bikes, were split between the two platforms: the Slim, Fat Boy, Heritage Classic, Deluxe and Breakout were built on the counterbalanced, hardtail-look Softail platform, while the Street Bob, Low Rider, Fat Bob and Wide Glide were based on the rubber-mounted, twin-shock frame of the now defunct Dyna platform.

Harley consolidated its big twins with the new Softail, and all the aforementioned models except the Wide Glide are now built on an entirely new frame, and are powered by the new, counterbalanced Milwaukee-Eight V-twin. The engine is rigidly mounted to the frame, making Harley’s big touring bikes the only ones remaining with rubber-mounted engines. While the Wide Glide has been discontinued, Harley has introduced two new Softail models: the Sport Glide and the FXDR 114.

Harley-Davidson Canada extended an invitation to ride the FXDR 114 in the hills and canyons northwest of Los Angeles, California.

Harley’s Most Radical Softail to Date 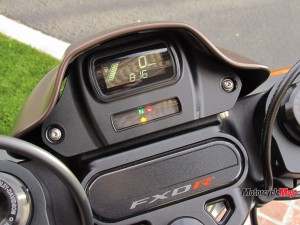 The FXDR 114’s styling was inspired by drag racing; its stretched-out silhouette is complemented by a low 713 mm seat height, forward-mounted foot pegs, relatively flat clip-on handlebars, and a fat, 240 mm-wide rear tire. The air filter juts out the right-hand side of the engine, its filter element exposed and pointing forward. Below it is an attractive two-into-one exhaust that’s tinted a golden brown hue. Everything about the FXDR’s styling says performance.

Of the six available colours, only the base Vivid Black has some sheen to it; otherwise, all the other colours are matte. Also, you won’t find a single bit of chrome on the bike, unless you count the inner lever portion of the shifter. The price is $26,499 for the Vivid Black model, while any other colour will cost an additional $450. It’s the priciest Softail model in the lineup. As on all big-twin Harleys, ABS is standard. 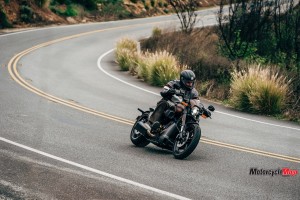 Harley makes two versions of its new Milwaukee-Eight V-twin engine. There’s one that displaces 107 cu. in., and one that displaces 114 cu. in. While the 114 engine is optional on other models, it comes standard on the FXDR. Harley doesn’t publish horsepower numbers, but the company is liberal with torque figures, which are usually quite impressive. The FXDR’s engine claims 119 ft-lb of torque at just 3,500 rpm. In practice, that translates into mountains of low-end torque, and the engine doesn’t give up too much of it even as it approaches redline. All that bottom end means you won’t be shifting through its six gears too often, but when you do, the gear changes are…