Big hats. Big boots. Big oil. Big guns. Perhaps more than any other state, Texas has its clichéd accretions. I had been here before, but not to explore. This time, as I traversed the second largest of the U.S. states over the course of several days, I would see that open range and nodding oil pumps were only a fraction of the story.

The first sign (other than the sign) that I was crossing into the northeast corner of Texas was the abundance of large, fenced properties with arched iron gates proudly displaying names like Mystery Ranch, Diamond 5 Ranch and Flying L. The early-May temperature was already 35 C and the humidity was stifling. Hope lay in my direction of travel: over the coming days, I would be riding generally west, and that would mean drier, more tolerable air. Here, however, the moisture meant the fields were deep and green, and tall dogwoods, live oak and tulip trees adorned the roadsides.

Riding south through Paris and Terrell, I skirted the heavy traffic of Dallas and arrived at the home of my sister and her family in Red Oak, conveniently in time for dinner(!). After an evening of laughter, stories and laundry (my sister may have begun suspecting my motives), together we played tourist to many local sights, including the Sixth Floor Museum at Dealy Plaza at the corner of North Houston and Elm Streets in Dallas. In 1961, this building was the Texas School Book Depository, where, from a sixth-floor window, Lee Harvey Oswald shot President John F. Kennedy as his open-aired motorcade passed by on the street below. Displays present an overview of JFK’s presidency, with details focusing on the assassination, as well as subsequent inquiries and conspiracy theories.

Outside the museum, we were drawn in by one of several hustlers trying to make a buck by offering their own tours and conspiracy theories. “Arthur” was a fast-talking charmer who tried to demonstrate that Vice-President Lyndon B. Johnson himself was behind the assassination. He was entertaining, if not convincing, and I didn’t mind giving him the “suggested donation.” 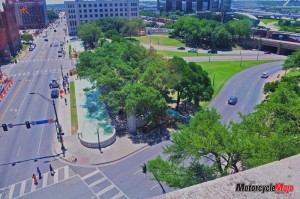 After a day to rest and do maintenance on my 2006 Suzuki V-Strom 650, I hugged everyone goodbye and headed out on Highway 67 through Cleburne. At Glen Rose, I turned south on Hwy 281 through Lampasas, and across the Colorado River at Marble Falls to Johnson City. This route led me through the heart of Texas Hill Country, a rolling green swath that extends south from Dallas to Austin, San Antonio and Fredericksburg, the last being a quaint German town that is listed in the National Registry of Historic Places. Fredericksburg attracts visitors for its beauty, cultural charm and – a surprise to me – its wineries. The Pioneer Museum features German homesteads and artifacts, while the town square, or Marktplatz, is home to the Vereins Kirche, the first public building in the town, which served as a town hall, school, fort, and church for all denominations. The entire “old town,” with so many bright limestone buildings, gives the feel of old Texas and German heritage all at once. Seemingly out of place, but impressive in its own right, there is also the huge National Museum of the Pacific War, which is very popular and exceptionally well done.

Fredericksburg would be my destination for the night. But first, I stopped at Lyndon B. Johnson National Historic Park along 290. Vice-President Johnson was called to the presidency upon the assassination of JFK, and he took the weight of that responsibility seriously. Over the next five years, he enacted over 200 bills, including – as might be expected of a former school teacher – many related to education and environmental conservation. The park itself maintains Johnson’s boyhood home, as well as his grandparents’ and the large house in which he and his wife, “Lady Bird,” raised their family. 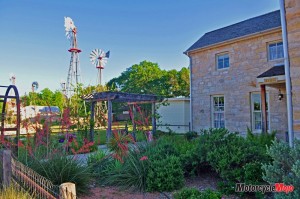 Johnson conducted so much presidential business from this home that it became known as the Texas Whitehouse. To facilitate his travel back and forth to Washington, D.C., an airstrip was constructed in the middle of his ranch. The park service continues to operate the ranch as it was, raising descendants of his prize-winning Hereford cattle, which graze freely about the property.

My home for the night was at the Lady Bird Johnson Municipal Park Campground on the outskirts of Fredericksburg. Adjacent to baseball fields and hiking trails, the park accommodates RVs as well as tents. For $10, I had a grassy site with water, and nearby washrooms and showers. Wi-Fi was free, so I took the opportunity to connect with loved ones back home. Then, I cooked dinner on my dual-fuel stove, and chatted with fellow campers before nestling into my bivy under a deep, starry sky.

I avoided major highways wherever possible in order to see more of the countryside. Road conditions were always good to very good, with some nice sweepers. Much of the time, posted speed limits were 70 to 75 mph (112 to 120 km/h) even on two lanes, which made the distances seem shorter and the riding more thrilling. Throughout this rolling landscape, the live oak trees were covered with “ball moss,” which appeared to overwhelm and kill them. It even seemed to grow on overhead power lines.

More Than a Pile of Rocks 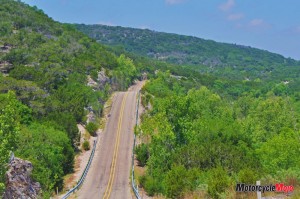 I was halted in Ingram by the sight of Stonehenge II, which was built on a whim by two friends in 1989. The structure is slightly smaller than the original in Wiltshire, England, but an impressive – and surprising – replica nonetheless.

From Kerrville west, the Hill Country gets serious. Almost immediately, the roads become twisty and steep. At Medina, I began to ride the Three Twisted Sisters (and no, you’re not the first to consider the innuendo). The route follows Ranch Road 337 to Leakey (pronounced Lākey, so as to readily identify foreigners, I’m convinced), then 336 north to Hwy 41 and, after a short jaunt west, turns south on Ranch Road 335. Largely a coarse tar and chip surface, the roads were in good condition as they wound their way over and through steep hills with switchbacks, twisties and sweepers.

Ubiquitous signs warned “Steep grades and sharp curves,” “Water may flood the road” and “Beware cattle guards” – which are grates in the road that allow vehicles to pass without stopping, but prevent cattle from crossing as they range freely on the ranches that…