How the author became his own risk manager and started riding again.

This is a story about my motorcycling journey: how I started, why I left and how I was able to come back to ride with greater joy and sense of adventure than I’d ever had before.

On a sunny day in June, the midday traffic on the Metropolitan Autoroute in Montreal was pretty typical. It was moving along briskly – until it wasn’t. It was during one of these “until it wasn’t” moments that an elderly lady missed the changing pace of traffic and rear-ended a BMW motorcycle. The rider spent the next six months in the hospital, four of which he was in a coma. That event would change the course of my motorcycling career.

When I was 15, a family friend asked me if I wanted to climb on his old Honda 150 and give it a try. My answer was an enthusiastic yes. I can’t remember if I always wanted to ride a motorcycle or whether I got hooked that day, but hooked I was. This is the clutch, these are the brakes and this is the throttle. Lesson over, I tore around the roads and paths on his farm for the next three days. I loved the freedom I had to roam and explore, and the concept of risk never entered my mind. It was pure joy. I didn’t have to become a motorcyclist. I was one from the moment I threw my leg over the seat. I decided that one day I would buy a motorcycle. And I did – I bought a brand new red Honda Shadow. She was a beauty. 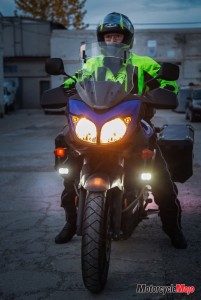 I had only ridden 8,000 km on my new bike when my girlfriend got a phone call. Her brother, a vice-president of a large technology company, was in a riding accident in Montreal. (Yeah, that one.) I had never met him, but from what I’d been told, he was a very experienced rider. In theory, I knew motorcycling had risks, but whenever I envisioned a serious crash, it didn’t involve a mature, intelligent, upwardly mobile professional – a description that fit us both. Even though I had only experienced the trauma and aftermath of the crash vicariously, it was so close to home it shattered my confidence. I had metaphorically fallen off my horse. Afterwards, I made the classic mistake: I didn’t get back on. I left my moto-steed in the garage, unridden, and eventually sold it.

But I guess I was still a motorcyclist at heart, because every spring I got the itch to ride and longed to have a motorcycle again. For years I put it off. I wasn’t afraid, per se, but I was in a kind of motorcycling limbo – a strange place where my joyful memories of the freedom of motorcycling were in constant battle with the vivid memories of the trauma I had gone through with my girlfriend after her brother’s crash. I was now all too aware of what could happen. Losing my life, or my ability to walk, or my ability to continue doing my livelihood or other joyful activities were all beyond my risk tolerance. But my reservations about riding were soon overpowered by the regret I feared I’d have if I never rode again. I decided, come hell or high water, I was going to get back on two wheels. 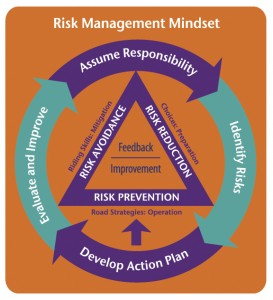 To overcome my reservations, I’d do everything I could think of to reduce the risk. I would always wear ATGATT (all the gear all the time) to protect myself from injury. I would wear a hi-viz yellow jacket to make myself more conspicuous. I would enroll, as a citizen participant, in a two-week Police Motor Officer Certification course to hone my riding skills. I detected a “motorcyclist as risk manager” theme. I realized that every decision I’d ever make with respect to my riding, my motorcycle, my gear or my training would all be informed by my tolerance for risk, and as such, would be risk management decisions.

This motorcyclist-as-risk manager idea gave me a feeling of control and suggested a way of thinking – a mindset – that could guide my decisions and actions. Evel Knievel said, “You are the master of your own ship, pal. There are lots of people who fall into troubled waters and don’t have the guts or the knowledge or the ability to make it to shore. They have nobody to blame but themselves.” If I was going to have the guts to ride again, I’d have to make sure that I had the knowledge and the ability to address and manage the risks and perils of motorcycling.

The first thing I would do is become “master of my own ship.” I would accept 100 per cent responsibility for all eventualities, however and by whomever they were caused. This would involve removing the word “blame” from my motorcycling lexicon and accepting that the buck stops with me. No one on the road is going to look out for me. They are too busy looking out for themselves, or looking at their latest text or trying to get to work on time. Sure, they may be in the wrong. It doesn’t matter. They don’t wish me harm. I’m simply not on their mind, and quite possibly not within their conscious visual awareness, either. I had to accept a basic truth of motorcycling: If I’m not managing the risk and looking out for me, then no one is.

The second thing I would need to do is identify all the known risks of motorcycling. I learned that motorcycling is more predictable than not, and that 100 per cent, absolutely, guaranteed, car and truck drivers are going to pull out in front of me, lose me in their blind spots, lose me behind poles and other structures in the city landscape, lose me among competing traffic and sometimes follow me too closely. And that while I’m riding, I’ll come across traction hazards, corners that are tighter than expected, deer on the road, ruts in construction areas, and cars stopped over crests and around blind corners. (And a lot more.)

The third thing I would need to do is make sure I could keep myself safe in spite of all of these things. I’d have to learn the skills and strategies needed to prevent, reduce and avoid the risks inherent in riding.

Since I really wanted to ride again, this was a course of action I was willing to adopt. 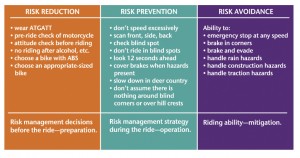 Whether I am off-piste skiing (skiing in the backcountry in avalanche-prone unmarked areas) in the French Alps or rappelling into the depths of an underground cave in West Virginia (two other pastimes I’ve enjoyed), it’s not about eliminating the risk, but rather managing it. The risk is what makes it fun. For motorcycling, I knew it was the same thing. I’d just fallen off the horse. I felt that if I could manage the risks, I would have the confidence to get back on.

From this, I developed a moto risk management approach. If I had to put it…