A spur of the moment detour has Jeff Davison exploring New Orleans’ French Quarter, its unique cemeteries and the full length of the historic Natchez Trace.

The route was just obscure enough that there was not even a Welcome sign. But the Cajun accent that greeted me at a roadside stand serving shrimp and crawdads told me exactly where I was. Other clues were that a county was now a parish, a dentist’s office was in a house trailer and Linda Ronstadt’s “Blue Bayou” was playing in my head. It was not on my itinerary to explore Louisiana, but as I traversed its northern width, a siren song began calling my V-strom 650 south toward New Orleans. The conversation between the voices, murmuring into each ear from my shoulders, went like this:

“It’s a four-hour ride one way on the bike.” 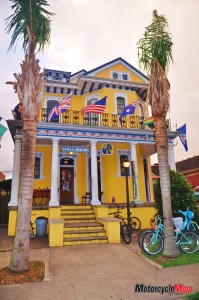 “Yeah, but it’s a four-hour ride one way on the bike.”

And that settled it. Highway 71 led through small towns like Montgomery and Colfax, as well as through the congestion of Baton Rouge. Approaching “Nawlins,” I began to see moss hanging from every tree and the highways became long, low bridges that skimmed above the spillways and bayous below. I checked into India House Hostel, where I found a comfortable bed and, even more important, air conditioning. In the humidity of the Deep South, that alone was worth the $20. But first, I paid a visit to the French Quarter, where I enjoyed historic Jackson Square and the bustling nightlife of Bourbon Street. Even on a weeknight, the clubs were jumping and the buskers were hustling, and an ambitious speaker of Creole convinced me that my boots needed shining. In the downtown core, I rode past a small tent city of homeless people taking shelter under a tangle of overpasses, then past the sports dome where thousands had taken shelter during Hurricane Katrina.

Ahead of the Storm 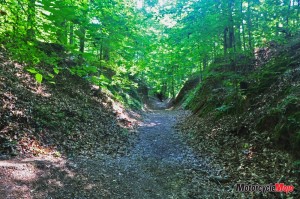 At 5:30 a.m., I was awakened by a roll of thunder and suddenly remembered some of the guests discussing a tropical storm forecast for the weekend. I decided to get up and on my way, hoping to see a few more sights before I headed north and, hopefully, out of the storm’s path. I arrived before the gates opened at Lafayette Cemetery No.1 in the Garden District. The district is famous for its antebellum-style houses with white columns and iron railings on second-floor balconies.

The cemetery is an old one, but the defining feature of most cemeteries in the Big Easy is that loved ones are “buried” in crypts aboveground. This is due to the very high water table (the city is largely below sea level) and buried caskets used to find their way to the surface – not exactly the hoped-for resurrection. A stroll through the cemetery was like wandering narrow streets between tiny stone apartment buildings.

Following River Road north, I crossed straight canals that were dredged and named like city streets leading out into the swamps, and I passed an airboat or two docked on the banks. The sight of Oak Alley Plantation stopped me in my tracks. Twenty-eight massive Virginia live oaks in two columns stretched from the mansion to the Mississippi River. Established as a sugar cane plantation in 1830, Oak Alley once enslaved more than 220 African-Americans. A tour of the Big House, followed by the slave quarters, gave a glimpse into the injustices that occurred on these grounds.

Beyond the towns of New Roads and False River, I rode through thousands of hectares of sugar cane, giving way gradually to corn and soybeans. Often the road ran along the top of the 12-metre-high levee, so that on my left I had an overview of the crops growing in the rich delta soil and, on my right the mighty Mississippi heavy with laden barges. 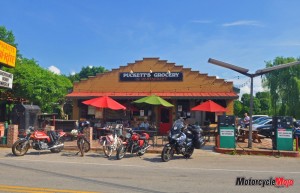 Crossing the state line (and the river) into Mississippi, I was about to deepen my education. At Natchez National Historical Park, I was introduced to the new Enslavement Markets Exhibition detailing the largely untold story of America’s internal chattel trade. It was both shocking and heartbreaking. Congress had enacted legislation in 1808 making it illegal to bring captives directly from Africa, so “slaves” were imported from northern states. Stolen men, women and children were marched sometimes from as far away as Maryland and Virginia to be sold in the markets at Natchez, a centre of the domestic slave trade until the Civil War.

Natchez Trace, the trail they followed, had been an old Native American trading route. Later used to deliver the U.S. mail, it also served as a military road for moving troops during the War of 1812. For many years, Kaintuck farmers floated their crops downriver to markets in New Orleans, then had to walk the Trace up to 800 km to return home. It was a dangerous journey, braving heat, mosquitoes, poor food and sucking swamps. Not to mention thieves who were well aware that these travellers carried their entire year’s earnings with them.

Today, the National Park Service administers the Natchez Trace Parkway, which approximates the path of the original Trace through a protected corridor of forest and field. Had I not carried maps, I would have been unaware of civilization nearby. The road is a narrow two-laner with no shoulder and a relaxed 70 km speed limit. The pavement was almost always in perfect condition, and what it lacks in curves, it makes up for in historic stops every few kilometres. It was lightly travelled – even on Memorial Day weekend – and the ratio of bikes to cars was better than average.

I stopped at Mount Locust, the only remaining of more than 50 inns once found along the Trace. At Route 552, I turned west and followed Rodney Road, a wonderfully winding back road through thick forest to see Windsor Ruins, an 1861 plantation mansion that survived the Civil War only to be destroyed by fire in 1890. All that remains are crumbling columns and…