Carbon fibre is the material of the moment, but the Ducati 1299 Superleggera and BMW HP4 Race, which come dripping with the stuff, came a bit late to the party. One full year ahead of them was the exquisite Dutch-built carbon fibre monocoque-framed VanderHeide V4 Superbike, a black magic motorcycle looking for customers that made its global début at the 2016 Goodwood Festival of Speed.

The story of how this astonishing bike ever got built in the first place is already strictly Hollywood, but the tale of how it made its public début in front of 150,000 people at Goodwood by gate-crashing Lord March’s annual three-day Motoring Garden Party, staged on the lawns of his stately home on the sunny south coast of England, is straight out of a schoolboy’s adventure book. No, make that Marvel Comics, with the svelte, sinister-looking VanderHeide as the dark invader which dramatically appears out of thin air – and transpires to be a Force for Good.

“The Goodwood introduction was a really great stunt!” rejoices Sjors van der Heide, 32, elder of the two Rotterdam-based brothers who, together with brother Rolf, 30, was responsible for constructing this two-wheeled symphony of carbon fibre. “We didn’t have an invitation, but we went there anyway hoping to use the motorcycle as our entry ticket. We finished building it on the Monday before the festival and made a brief test ride on it to be sure everything worked. Then on Wednesday we set off for Goodwood. Thursday we turned up at the gate and asked them to let us in, but they said no – they’d sent out all the prized invitations months prior and they didn’t have one for us,” Sjors explains. “Eventually, we managed to meet the people in charge of the motorcycle display and showed them the bike. That did it – we were invited on the spot! The other people in the motorcycle paddock had to squeeze up to make space for us, but everyone was very kind. We had Keanu Reeves on one side and you [Alan Cathcart] were on the other. It was a nice way to meet!” 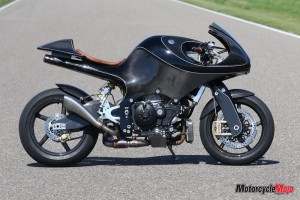 Indeed so – especially since like everyone else who likes to think he has his finger on the pulse of the European bike-building business, I was completely blindsided by the appearance of the VanderHeide. Rolf and Sjors had succeeded in constructing this amazing motorcycle over a five-year period completely undetected. And that in itself was the mythical story of making childhood dreams come true by actually building a bike you’d longed to create for years and made drawings of when you were just a kid.

“Our father, AJ, is a keen motorcyclist and for as long as I can remember, even as a child, I’ve dreamed of building my own bike,” says designer Rolf, who after graduating with a combined degree in mechanical engineering and business administration, went to work for Dutch supercar manufacturer Spyker before switching to another avant-garde local company, Carver, a creator of unique self-balancing three-wheelers. From there he moved to Delft-based composite specialist Lightweight Structures for five years, during which time he began to work with carbon fibre as a structural material.

“What I learned from Spyker and Carver was that you need to have distinctive looks and advanced technology to build a commercially successful performance vehicle,” says Rolf. “At Lightweight Structures I began to understand the huge potential of carbon fibre as a next-generation material that’s available today, and will be the steel of tomorrow. I felt inspired by the way these companies consistently step out of their comfort zones to ensure innovation. And as an engineer I’m fascinated by the endless possibilities of carbon fibre composites. So I set myself the target of building a motorcycle that combined all those elements, and the VanderHeide is the result.” 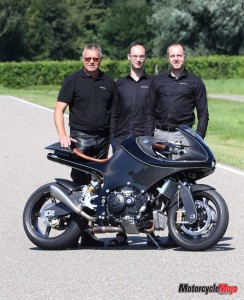 In 2011, Rolf set out on his voyage of discovery to create his eponymous motorcycle, with Sjors responsible for its commercialization. Initially, it was a spare-time project, with Rolf working on it in evenings and on weekends in between family responsibilities. But with the support of his family, he began working full-time on the bike. He’d already decided to use a 65-degree V4 Aprilia RSV4 engine. “It’s light, it’s powerful, it’s compact and it also sounds nice, like a pure MotoGP racer,” he says. “So for us, it’s the ideal engine.”

Purchasing a brand-new Aprilia from a local dealer, Rolf measured everything up and used the RSV4 mounting points as ground zero for designing and constructing the graceful carbon fibre monocoque moulded in an immensely strong single section comprising the chassis, fuel tank, bodywork and subframe for the seat. To this he planned to attach front and rear suspension, also wholly made from carbon fibre, with a conventional-style rear swingarm, but using a Fior-type front suspension system with twin articulated triangles to deliver what he views as an improvement over a telescopic fork.

Having completed the outline design, Rolf then invited Dutch automotive designer Michiel van den Brink to take care of styling the bike, Rolf’s reasoning being that he had no experience in that, so it was better for him to focus on the engineering. “I’d followed Michiel’s design work for some time, and his flowing lines and organic shapes impressed me,” says Rolf. 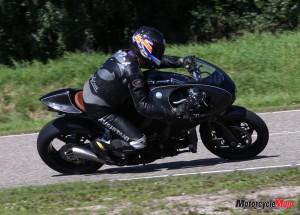 But it was Rolf who painstakingly created the carbon fibre monocoque weighing just 15 kg that’s effectively the skeleton of his bike and on which the engine and suspension are hung. It’s a true monocoque, too, with the 24-litre fuel cell integrated into the chassis structure like on the TT-winning John Player Norton. The VanderHeide monocoque is a fully enclosed shell to which the engine is attached at four points on either side – at the front and rear cylinder blocks, the clutch housing and low down on the gearbox. Since the shell also comprises the bodywork, van den Brink’s styling choices had to be incorporated in its final structure, which Rolf painstakingly created by hand. He couldn’t use pre-impregnated material, because the complicated shapes of the stylized monocoque made draping wet carbon fibre fabric in the correct shape difficult. Instead, he had to build his own vacuum oven to cure not only the monocoque but all the many other carbon fibre parts on the motorcycle – except for the carbon fibre wheels, which are made by BST in South Africa.

“There wasn’t an oven big enough in the Netherlands that we could use, so we had to make our own,” says Rolf. “It’s not pressurized, so it’s not a true autoclave, which is vacuum plus pressure. But it took us 10 hours to cure the monocoque correctly – you have to vary the temperature quite a bit and you have to slow it down to ensure that every molecule is completely cured. We made a lot of practice runs before we were ready to tackle the monocoque, but even so it was a critical moment, and we were pretty relieved it came out just right the first time.”

The twin-sided carbon fibre cantilever swingarm weighs 5 kg and pivots in the engine crankcases and the monocoque, working a fully adjustable Öhlins TTX36-IL rear shock directly without benefit of a link or any variable-rate spring, and delivering 120 mm of wheel travel. Up front, Rolf used his own variation of the double-wishbone girder fork originally created by Claude Fior.

A Most Unique Suspension

The VanderHeide V4 follows the Fior principle in carrying the front wheel within a carbon fibre wishbone fork that pivots in the monocoque with twin articulated aluminium triangular links connected via a pushrod and rocker to the cantilever-mounted Öhlins TTX36-IL front monoshock. This shock also is fully adjustable for spring preload and damping to deliver 110 mm of wheel travel. However, unlike on a Fior or the copycat BMW Duolever, the front shock is set into a tunnel running lengthwise through the top of the monocoque beneath a plexiglass cover and is connected via a short rod (with adjustment to vary the ride height front…