“WARNING: Highway 70 may be closed at any time for up to three hours during a Missile Test.” That road sign is the first indication that I am approaching White Sands National Monument, which is surrounded on three sides by White Sands Missile Range, the largest military installation in the United States. White Sands, which encompasses 8,300 sq. km. in southern New Mexico and is most infamous as the test site for the first atomic bomb, is a key location in the U.S. military’s defence plan.

After collecting my National Parks Passport stamp at the visitor’s centre, I follow the 12-km driving loop into the largest gypsum dune field in the world. It is almost noon and the whiteness is blinding. At the four-kilometre mark, the paved road reverts to sand and I stand up on the pegs of my 650 V-Strom. Dazzling sand drifts so much and so regularly that plows must be used to clear a path, leaving pristine roadside banks. Were the temperature not 35 C, I could believe I am riding right into a Canadian winter, especially when I happen upon a large group of children riding saucers down the dunes. Unlike other sands, the pure white gypsum crystals do not become hot in the sun, and I hike over several towering dunes just to experience something of their size. 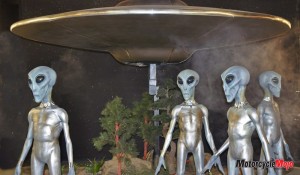 Northeast of Alamagordo, the landscape rises by almost 1,000 metres and the temperature drops by more than 10 degrees. At Ruidoso, I suddenly find myself surrounded by tall ponderosa pines, an abrupt change from where I had been only an hour before. I am heading to Roswell, out of my way by three hours because, after all, this is a riding holiday – and besides, who wouldn’t go that far to see aliens? A central feature of downtown Roswell is the UFO Museum, which stands by the claims of rancher William Brazel, who in June 1947, found strange fragments of metal that could be pieced together into a “saucer.” The U.S. weather service maintains the material came from a weather balloon, but tales of sightings and conspiracy theories have only increased over time.

Before the sun sets, I return to Ruidoso and “wild camp” along Ski Run Road in Lincoln National Forest. I revel in the silence, a soulful cricket my only companion, and in the ponderosa pines wafting their delicious vanilla-like aroma.

Most of the next day is spent traversing flat rangeland. Arrow-straight back roads, which in Texas would have a 75 mph limit, are limited to an unreasonable 55. As there seldom is another vehicle in sight, I decide to obey the law – of Texas. I soon discover that locals feel the same when a pickup truck hauling a horse trailer pulls up and passes me.

From Moriarty to Tijeras, I follow a section of Route 66, then turn north on Highway 14 – a truly Scenic Byway. Knowing that scenes from the movie Wild Hogs were filmed at Maggie’s Diner in Madrid, I look forward to eating there myself, just to say I have. I ride into town, past all sorts of quirky shops and art galleries, and there it is! I take a selfie out front and go inside to find the bar and booths covered in T-shirts, stickers, patches and jewelry, some of it celebrating the diner as it had appeared in the movie. But not a beer or an enchilada in sight. Disillusioned, I head across the street to the Jezebel Café & Soda Fountain. It is good. But it isn’t Maggie’s. And the server is no Marisa Tomei.

The ride into Santa Fe with its 400-year history and adobe architecture brings back the magic. New Mexico is known as the Land of Enchantment, and Santa Fe contributes more than its share of that aura. Unique Pueblo pottery, kachina dolls and Kokopellis adorn art studios and shop windows alike. I park just off the plaza to enjoy the ambiance and tour the oldest house in the U.S.A. (ca. 1649) and the oldest church (ca. 1610). The mix of Native and Spanish cultures really does stir a sense of the numinous. The road into the mountains is wonderfully twisty, but this is no place to race. Corners show remnants of winter sanding, and on eight occasions I come upon mule deer standing beside – or on – the road. I set up camp at 3,048 metres above sea level in Santa Fe National Forest.

Morning is so still and quiet that I can hear the air whispering under the wings of a raven overhead. I push back the cover of my bivy and see my breath – it is below 0 C – so I lie there for a while, warm in my down sleeping bag and encircled by aspens that point skyward. Their bark is white and their new leaves are the unequalled green of spring. 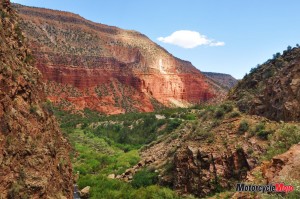 Fifty-five minutes later, I ascend into Los Alamos, a misfit town in this southwestern land. Once little more than a ranch school for boys, during the Second World War, Los Alamos became the secret government town where the sole purpose was to develop the atomic bomb. I pass the old gatehouse where all visitors to town had been required to show ID, and I tour the museum that tells the town’s story. Today, Los Alamos National Laboratories has grown and diversified, and the town’s residents rank among the most highly educated and with the highest earnings in the nation – quite a contrast to the rest of the state.

En route to the Jemez Mountains (pronounced HAY-mez), traffic is filtered through a checkpoint because the road leads through a maze of secured government buildings. Highway 4 leads to Valle Caldera National Preserve, a 36,000-hectare basin that is the remnant of a volcanic explosion that was 500 times more powerful than that of Mount St. Helens. I wind through aromatic piñon forests and past hot springs before descending into the Jemez Valley, which lies between sharp cliffs of white and red. In Jemez Springs, I explore the ruins of a pueblo and church dating back to the 1620s. Like other remote mountain communities, this village seems to draw an interesting mix of artists, sculptors and free spirits.

Farther south, I detour up Forest Service Road 376. The single-lane route winding up a red canyon wall is all that remains of a logging railway built in the 1920s. About 8 km in, I reach the Gilman Tunnels, which were blasted out of the granite cliffs. Beyond the second tunnel, I lean over the low guardrail to hear the Rio Guadalupe spilling over the rocks far below. Looking farther up the road, where it turns into rutted gravel, I see why it is listed on dangerousroads.com for its blind curves, hairpin switchbacks and avalanches that can occur at anytime. As a solo rider, I think it best not to attempt it.

From the small village of Cuba, I turn east through tiny hamlets such as Gallina and Coyote while riding across a constantly changing landscape, from rolling range to rugged canyons and back again. Passing Abiquiu, I come out at Hwy 68 north of Española, then follow the Rio Grande north through a steep canyon. The towering cliffs seem to lean over the narrow highway and massive rubble lines the roadside. Steel girders and cable wire fencing stand guard over the traffic (me!) below. I arrive in Taos in time to watch a magnificent sunset over the mountains. And as dusk falls, I make my way down a one-lane gravel road north of town, overlooking Arroyo Hondo. An arroyo is a dry riverbed that can fill with water during a rain, and this night it is babbling – a pleasant ambiance for a night’s rest under a starry sky.

Gliding across a vast plain the next morning, I am startled when the earth abruptly drops away beneath me. I have come upon the Rio Grande Gorge, a 200-metre chasm traversed by one of the highest two-lane bridges in the country. It is breath-taking. On Taos’s main square, I wander through the shops with all their silver and turquoise jewelry, Nambe pottery and Native American art. And I enjoy New Mexican fajitas with mole poblano, a sauce made with three kinds of chilis, 35 spices and a hint of chocolate.

Highway 518 twists beautifully up and through Carson National Forest before weaving down into Las Vegas, which is starkly different from its Nevadan cousin. Arriving at Santa Rosa in the high desert, I am astonished by Blue Hole, a “lake” 24 metres in diameter and deeper than it is round, and which is one of the most popular scuba diving destinations in the U.S.A.. I watch children plunging into the 16-degree water next to a small group of scuba students. 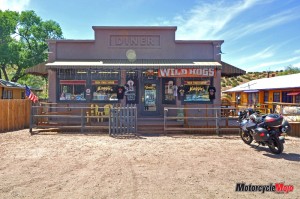 From Santa Rosa to Tucumcari, any wrinkles in the Earth’s crust are smoothed out and soon the landscape is ranchland stretching away in all directions. Tucumcari was once an iconic stop on Route 66 and, like so many others, the town was struck a blow when the interstate passed it by. Try as the Tucumcari town fathers might to sell the town as “historic,” many businesses are boarded up and hotels offer rooms for $29 per night.

At San Jon, the next forgotten settlement, I find a place to camp in a municipal park. A motorhome is the only sign of life, and I meet Pierre and his wife, a retired couple who, it turns out, are from Montreal. We discuss the weather as we watch a lightning storm on the far, flat horizon.

“I think it’s moving north of us,” I say hopefully, holding a wet finger up in the breeze.

“The forecast says we should get rain around 10 p.m.,” says Pierre, “but the wind direction seems like you’re right.”

To be safe, I set up camp on high ground, and make sure the bivy is zipped and buttoned shut. I had treated it with weatherproofing before leaving home, but I have yet to test it – a perk of travelling in the sunny southwest. I lie there watchfully, the silent light show creeping ever closer. At 10 p.m., right on schedule, the heavens open. First with rain. Then sleet. Then hail. Remember when you could buy a bag of marbles in assorted sizes? Well, the contents of all the bags fall from the sky on this night. In the bivy, I feel like an unarmed man playing paintball with God. This stung. Keeping covered, I unroll my riding jacket and pants, which I am using as a pillow, and lay them out on top of me inside the bivy. I am taking ATGATT in a whole new direction.

Morning comes bright and sunny, the weatherproofing has passed the test and, as a bonus, the bike is the cleanest it has been in weeks. As I pack up after breakfast, I smile at my good fortune, at the adventure and exploration, and with my sleeve rub the only remaining speck off the windshield.

New Mexico has indeed proven to be a Land of Enchantment, a jewel of unparalleled charm.